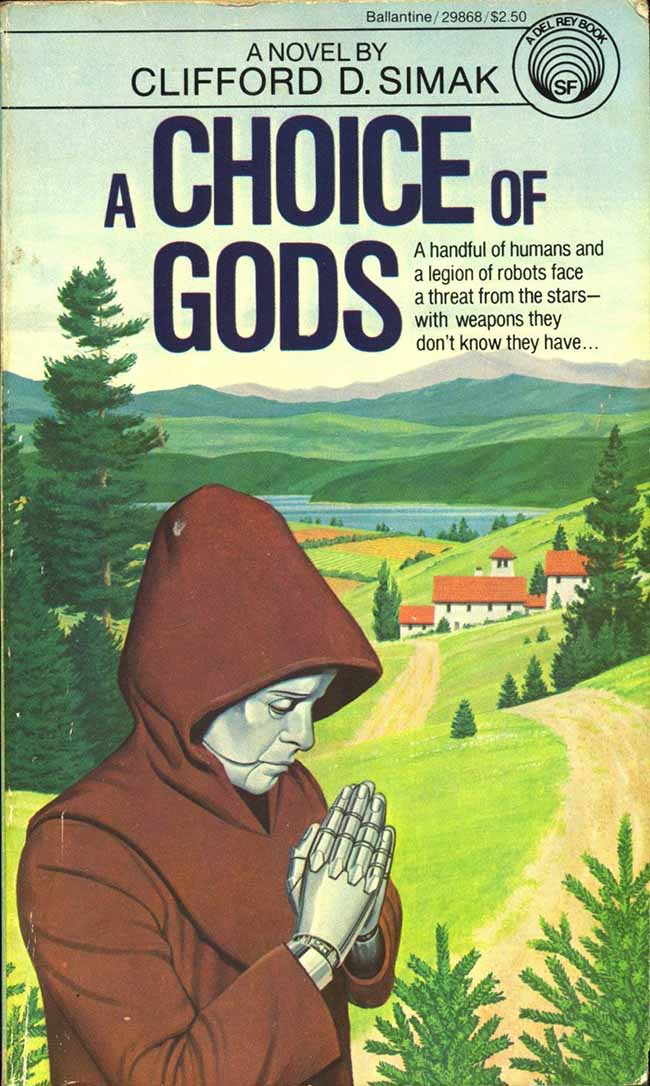 If there is such a thing as pastoral science fiction, Simak takes the lead in it. His work is calm, thoughtful, introspective, clever. It often takes place in rural or wilderness settings in his home state of Wisconsin. It’s seldom violent, and sometimes, as here, tackles religious subject matter among other things. It makes for relaxing and enjoyable reading.

This book takes place in a future Earth where nearly all of humanity has vanished. Remaining are two elderly people, Jason and Martha Whitney, last dwellers in the Whitney home. The rest of their extended family have discovered mental space travel, and have spread out to distant planets, though they come home occasionally. There are other small groups. We meet members of a native American tribe led by Red Cloud. They have recaptured the ancient ways of their people, living off the land, migrating regularly along the river valley near the Whitney home. Then there are the robots. Some are family servants of the Whitneys, some have occupied a former church and monastery, and are investigating the holy scriptures they found there, and doing their best to understand and worship God. Further away is a large colony of robots who shun humans, and have build a giant machine that they live in and tend to, the purpose of which is revealed in the book.

The rest of humanity was spirited away by forces unknown to a distant unknown place, but one of the Whitney family has found them, and returned to tell the remaining Earthlings that those long-missing humans have rediscovered Earth and are sending an exploratory space ship to it to find out if Earth can be returned to and reclaimed.

This is not good news to any of those who remain on Earth. They fear the return of masses of people will once more destroy Earth’s environment (which has largely recovered to a pristine state) and destroy all their ways of life.

A fine book with an unexpected ending. Recommended.