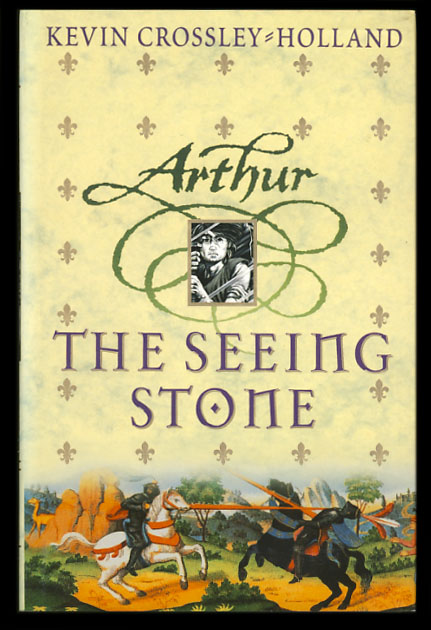 Generally I steer away from retellings of the Arthurian legends because I so love the version by T.H. White that others pale by comparison. This book, the first of a trilogy, seemed a different enough approach to be worth a try, and I enjoyed it.

The Arthur of this story is Arthur de Caldicot, living with his family in their manor house/castle on the English side of the Welsh border in 1199. Arthur’s father is the lord of the small village and nearby territory. One of the members of his village is an old man named Merlin who is revered for his wisdom, but in many ways seems no more than an old man. Arthur’s life is troubled by the jealousy of his older brother, and the treatment of some of the lower class people in his village. He longs to become a Knight like his father, but in fact shows little aptitude for it.

All that changes when Merlin secretly gives him a shiny black stone that in time becomes a window into the past. A window into the time of another Arthur who is the one we know of in the legends. This story’s Arthur sees many parallels in that Arthur’s life to his own, and as mystery of the seeing stone reveals ever more of the past, the Arthur of 1199 finds his secret knowledge gives him insights into those around him he never had before. Soon secrets in his own life begin to unravel, opening up new possibilities for the boy, all against a well-researched backdrop of mediaeval life of the time.

Well done, I will look for the rest of the trilogy. Recommended.