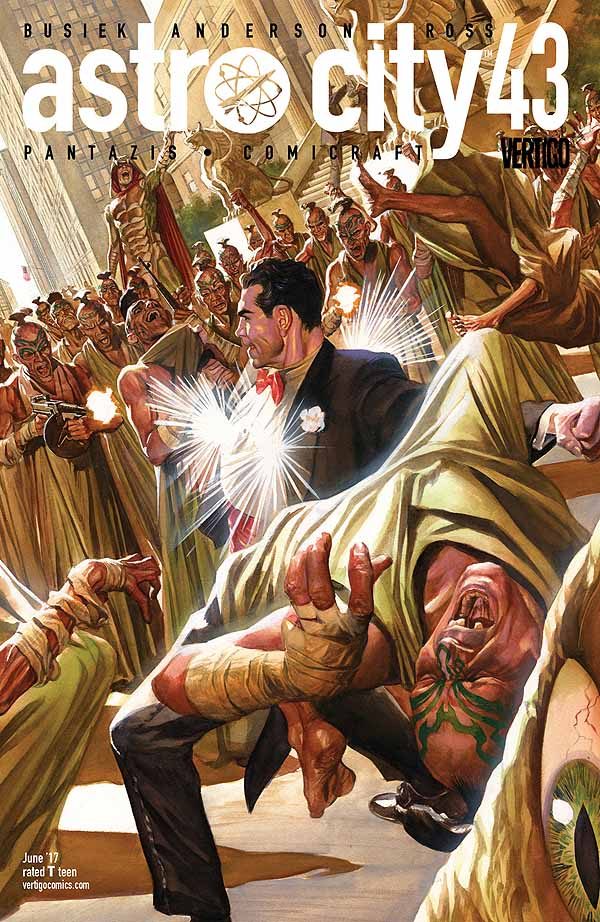 Is it possible for a character to be cute, charming and kind of creepy at the same time? That’s how Tillie Armstrong struck me as she cheerfully took control of this issue from the guy with the purple balloons. Tillie breaks the fourth wall and talks directly to us readers as she recounts the story of her own personal hero, and a super-hero, The Gentleman, her dad.

Tilley is an earnest, innocent young girl in the mold of Billy Batson’s sister Mary, and could have been played well by a young Judy Garland. Her father is everything to her, a fine man who does all the right things until his heroism brings him down. Somehow Tillie’s great love for her dad brings him back to her as, not only a protective parent, but one with super-powers allowing him to fight crime in Astro City, all this taking place in the 1940s and 1950s. How exactly she does this isn’t clear, but he seems to be a real person to everyone, even though that can’t quite be right. He’s the spooky part. Incidentally, he could have been well played by Clark Gable, as I see it.

Other stories and characters are intertwined with that of Tillie and her father, but theirs is the most interesting one. Tillie has a journey of her own coming to terms with the unique situation she finds herself in. It’s all beautifully written by Kurt Busiek and wonderfully illustrated by Brent Anderson, with Alex Ross on cover. Great colors by Peter Pantazis and letters/design by Roshell and Deschesne of Comicraft, too.