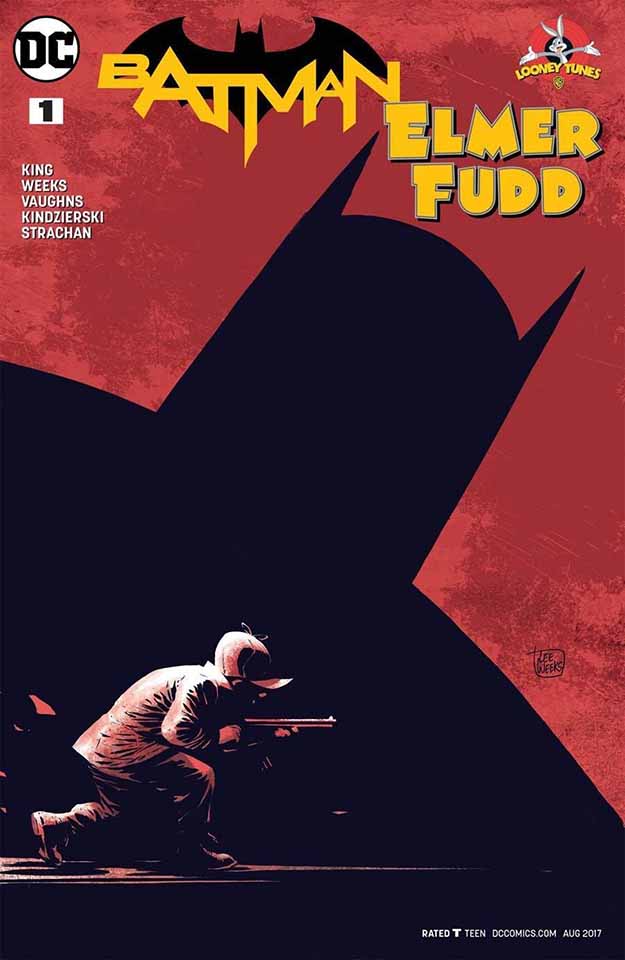 After attending the ‘Ringo Awards in Baltimore last weekend and seeing all the love given to this comic, I had to read it. Previously I thought, “nah” to the entire idea of DC and Looney Tunes team-ups, but I had to find out why this one won awards for Tom King and Lee Weeks.

Batman began as a grim and serious character, a menacing figure to criminals, an avenging force for justice. He mellowed some from the late 1940s through mid 1960s, but as far as I know was only really played for laughs in the 1960s Batman TV show. As a kid I was SO disappointed in that! Ever since, DC has stuck to serious, grim and gritty Batman. This comic bucks the trend by actually being funny, though most of the laughs are at the Looney Tunes characters. If you’d never seen any Warner Bros. cartoons, you might not even get that, as everything is played straight in the main story. There are no cartoony drawings, all the characters would fit into any modern Batman comic visually. It’s in their dialogue and actions that they reveal their Looneyness, and though they are funny to the reader, they all take themselves very seriously. That’s the best way to do comedy in my opinion. On the first page, even the title made me laugh: “Pway for Me.” Elmer’s dialogue captions are sad and serious in meaning, but conveyed with his classic speech impediment, it’s quite funny. The rest of the cartoon cast are mainly revealed through their speech patterns. So, if Elmer Fudd were a “real” person, at least as real as the rest of Gotham City’s citizens, what would he be like? This book tells us, and the results are quite entertaining.

The backup story was not as successful because it goes the other route, making Batman as cartoony as a WB character. It’s not terrible, but it’s not very funny. It does present a nice contrast to the main story, I suppose. This is a book I would never have read normally. I’m glad I did.