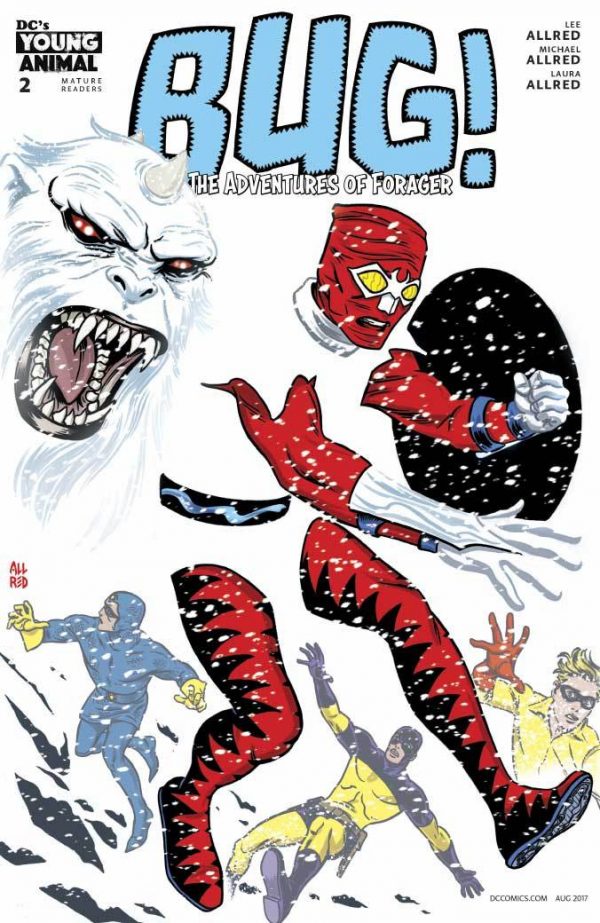 Despite the presence of many characters drawn by Jack Kirby and/or Joe Simon and Jack Kirby, this book definitely has the “Young Animal” vibe. Forager has been sent back in time and to a very different place, the Himalayas in World War Two, where he’s dropped into a mission to take back the hidden city of Nanda Parbat from the Germans, with the mission soldiers being The Losers (Gunner and Sarge at first), Sandman and Sandy, Blue Beetle and the Bazooka Boys (Brooklyn Brand and Buddy Blankenship). These characters at first think Bug is an enemy robot, then the costumed hero The Red Bee, and finally they listen to who he really is and accept his help.

The German operation is being run by a young General Electric, the villain who sent Bug into this mess in the first place. Then we have the actual robots, amusingly designed with giant plug heads, Abominable Snowmen, the rest of The Losers (already prisoners of the Germans), a strange little girl, and the six-armed blue-skinned goddess Rama Kushna. Does this all make a story? Yes, an entertaining one, if rather odd and sometimes illogical and dreamlike, but that’s the Young Animal model. Lee Allred’s story kept me turning pages, and the art by Michael and Laura Allred is highly groovy, as always.