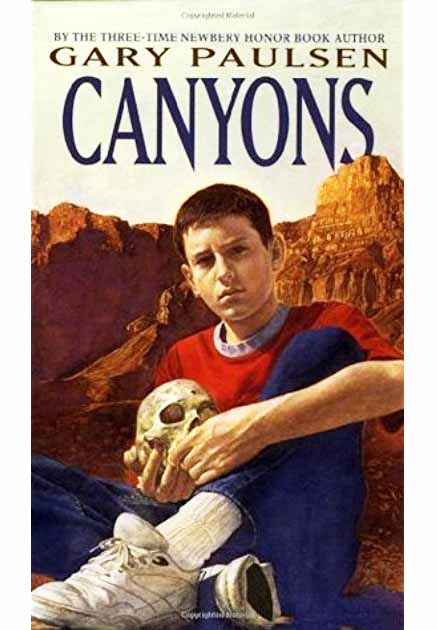 A desert canyon near El Paso, Texas is the scene of two stories in different times. In the past, we follow Coyote Runs, an Apache boy who wants desperately to take on the privileges of manhood, including having a horse of his own. He’s invited to join a raid on a herd of horses over the border in Mexico, but to get there and back, his small band of raiders must cross through territory patrolled by US soldiers who want the Apaches out of their area. In the present we follow Brennan Cole, a solitary boy with few friends who likes to escape his dull life by running, not to compete, but simply to get away. The stories alternate until they intertwine. Coyote Runs and his raiders capture a large group of horses, but stumble into an Army patrol on their way back. Separated from the group, Coyote Runs tries to escape into Dog Canyon where he hopes the soldiers will not follow. In the present, Brennan goes on a camping trip to Dog Canyon and finds an object that seems full of memories and visions. He brings it home with him, but soon finds his life haunted by the memories of Coyote Runs. Eventually he realizes that he must return the object, and runs away from home to do so. As the two stories merge, Brennan makes a desperate attempt to set right an old wrong, with police on his tail.

This was an exciting read once I got into it and understood the premise. Well done, reminds me of the books of Will Hobbs as well, but with just a touch of mysticism.

2 thoughts on “And Then I Read: CANYONS by Gary Paulsen”