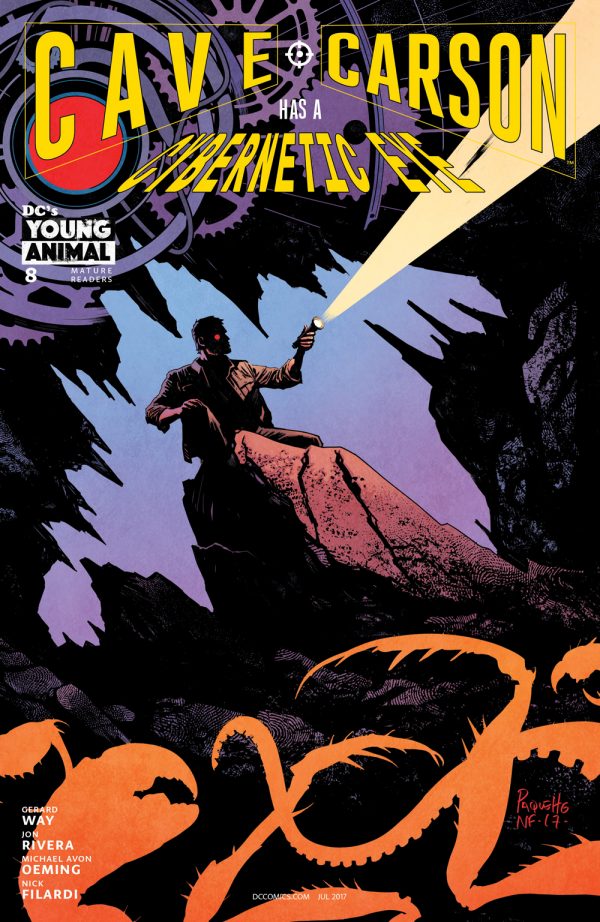 I haven’t been a fan of this title, really, but I keep reading it. I guess I keep hoping it’s going to be more than it has been. The comic I want to read would be more like the original series from DC in my childhood (it ran only in SHOWCASE and THE BRAVE AND THE BOLD). Then and now, the idea of a crew of underground adventurers with a car that could drill through anything was interesting and exciting. This series starts there, takes a few odd twists and turns, then seems to be going the same direction, but never arrives, at least so far.

As this issue opens, Cave and his daughter are standing in a graveyard talking about their wife/mother, though no one is named, and the intent is not clear. The place cap says, “Fawcett City. A different Earth.” Fawcett suggests Captain Marvel, but there’s no evidence of any Fawcett characters. Cave and his crew have apparently emerged on a different Earth’s surface, one that is war-ravaged, its citizens being mentally controlled by The Whisperer, a Lovecraftian creature in cahoots with Carson’s old boss back on his own Earth. They meet Carson’s mentor, a college professor, or at least the version in this reality, and are attacked by The Whisperer. As usual, the visuals are bright, psychedelic, but somewhat simplistically drawn and hard to follow at times. The story is not much easier.

Perhaps the best thing here is two faux pages of a Geologist magazine at the end, which are quite funny.

I can’t really recommend the issue as a whole. I will probably keep reading the series anyway. Not sure why.