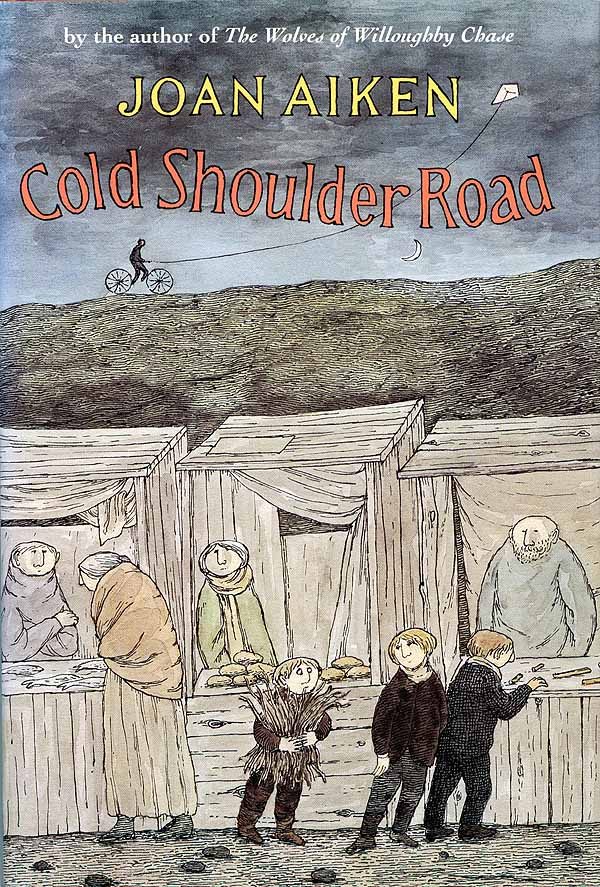 In her long writing career, Joan Aiken wrote about a dozen novels for children featuring the Twite family and friends in an alternate-history somewhat Dickensian, somewhat steampunk Edwardian series that began with “The Wolves of Willoughby Chase” in 1962. I’ve found and enjoyed about two thirds of the series over the last five decades, but many years go by between readings, and I don’t try to keep the continuity or characters straight, I just take each book on its own. This works fine for me. “Cold Shoulder Road” was published in 1996, and features Is Twite, the sister of Dido Twite (I’ve read more about her), and her cousin Arun. They’ve traveled to the southeast coast of England, known for its chalk-white cliffs, marshes, and smuggling across the English channel. In the Aiken alternate history, even though the book takes place in Edwardian times, pre-automobile, there’s a tunnel under the Channel for a private railway line, which seems to be in the control of a group called the Merry Gentry. They’re heartless smugglers who everyone in the area is deathly afraid of. One of their tricks is to kidnap the children of any family who dares to resist or report on them.

Is and Arun are looking for Arun’s mother, who was last living on Cold Shoulder Road in the coast town of Folkestone, which has been taken over by a “cult of silence” religious group. This makes finding out what happened to Arun’s mother harder than ever, and there are plenty more dangerous characters and situations that Is and Arun are soon in the thick of. There’s even an evil Twite in charge of the cult, and when they turn to an Admiral for help, Is and Arun are soon locked in an underground prison. When they escape and finally find Arun’s mother, things just get worse.

These books are fun, lots of suspense and thrills, some humor, and characters that are right out of a Charles Dickens novel, but with a few arcane twists. The cover by Edward Gorey captures the flavor nicely.