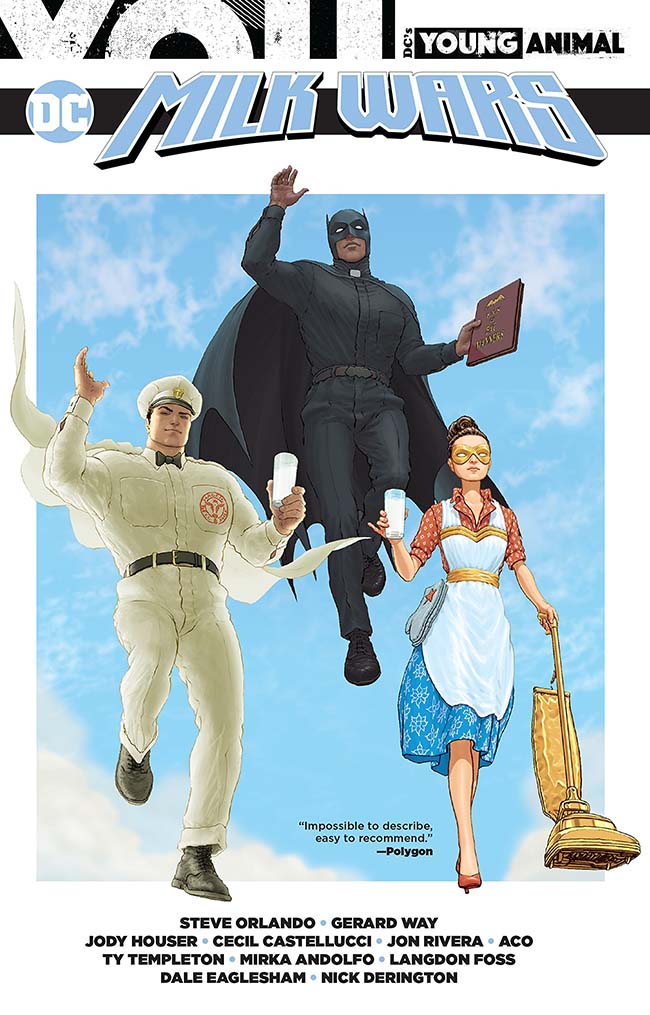 First, let me tell you about my small involvement in this project: four two-pagers introducing the new character and series ETERNITY GIRL that ran in the back of the individual issues of this crossover. I wasn’t involved in the rest, and hadn’t seen it until now.

So, crossover events are meant to bring characters from different series together in hopes of introducing new readers to ones they don’t know and sparking sales. They are inevitably highly plot-driven with too many characters to get to know well. This one is no different. Crossing the Young Animal characters with each other might have been an easier task, adding the Justice League makes it harder, even assuming readers will know at least the main ones: Superman, Batman and Wonder Woman. Their appearances here are in some ways welcome way-stations of familiarity, but in others weird versions of the characters that don’t act or seem much like they usually do.

I’m lettering one of the Young Animals series, DOOM PATROL, and read SHADE THE CHANGING GIRL and CAVE CARSON, and while I found concepts from those here that were familiar, at times I was still confused, and even more so about the characters from the other Young Animal books I don’t read. The reader is thrown into the deep end, on a version of Earth where a horrific version of Superman called Milkman Man is distributing a kind of milk meant to homogenize the entire population of the planet, and forcing them to drink it, or killing them, he doesn’t seem to much care which. Cave Carson is gathering the Young Animal characters and the Justice League to oppose him, with much of the book telling of that gathering. Finally, the big battle and confrontation with Milkman Man and his masters, with a reveal about the anti-hero I found very weird indeed.

There’s some nice art here, some moments of interesting writing, but overall I found this story confusing and not very fun to read. I can’t really recommend it. Perhaps I’m too old for it, and it requires a younger animal.