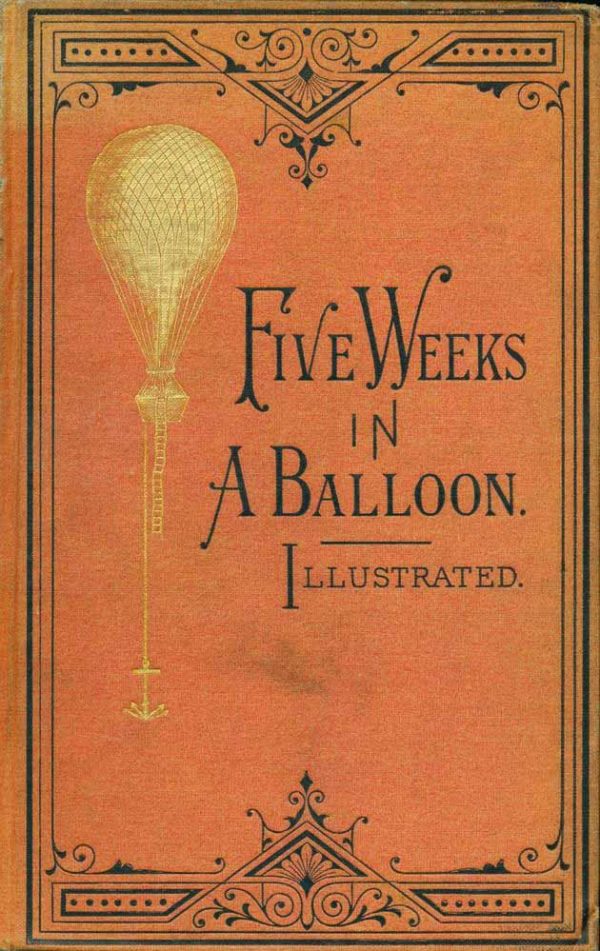 I read it digitally, but this is a nice example of an early cover in English. The original was published as Cinq semaines en ballon in France in 1863. Note that Verne’s name is not yet on the cover, it was the first of his great adventure novels that helped make him famous.

Dr. Samuel Ferguson, a noted British world explorer and inventor, has planned a trip into the unknown center of Africa, searching for the source of the Nile, and information about other expeditions that have been lost. This was a popular sort of adventure at the time, and about ten previous expeditions had been launched and failed. Rather than go on foot or horseback, Ferguson plans to float into Africa in a hydrogen balloon of his invention. Ferguson’s breakthrough is a double balloon, one inside the other, that can be regulated by heating the gas and transferring it from one layer to the next and back, allowing the balloon to stay aloft for much longer than others of the time. With him will go his faithful manservant Joe, and his friend, the expert marksman and hunter Richard Kennedy. With the backing of the Royal Geographical Society, Ferguson and his crew and equipment are delivered to a small island off the eastern side of Africa for their launch. Kennedy is against the idea, but his friendship with Ferguson wins him over in the end.

Many adventures are had as the balloon drifts over Africa. Verne clearly did his Africa research, and makes the physical journey interesting and believable. By raising or lowering the height of the balloon, and finding different winds, Ferguson is often able to direct their course where he wants to go, but not always. Sometimes they are becalmed over the desert, or swept up in mighty storms. Adventures are had with the animals and natives of Africa, who are mostly hostile and afraid of the balloon. When the crew needs to land for water and game, they are always in danger, as a well-placed spear, arrow or bullet can permanently ruin them. Ferguson is smart and keeps calm in all adversity. Joe is cheerful and sure his master will triumph, and Kennedy is there to back his friend with gunfire when needed. The adventures and thrills are many and fun to read, and the success of the expedition is often in doubt. Indeed their final struggle to reach the west coast of Africa, or at least a part of it controlled by France, is the most hair-raising of all. The balloon is losing hydrogen, and to keep them aloft, the crew has to jettison all their belongings one by one, with an angry tribe hot on their heels as they scrape along just over the higher hills.

This book is very much a product of its time and prejudices. The natives of Africa are seen as superstitious, cruel, warlike, and ignorant, with barely a good word for them in the book, never mind the fact that the balloon is essentially a small invasion of their homes. African animals are there as something to eat, or that wants to eat the crew, little more. In fact, a group of condors destroys the outer balloon at one point for no good reason except to further the plot. Joe, Ferguson’s manservant, appears to be a black man, and may be an actual slave, though neither point is clear, and even he shows no sympathy for the African natives.

The science of the book is convincing, but it does have a hidden flaw: the amazingly unending power source for the heat needed to keep them aloft. In a way, Verne is setting the standard for all future science fiction there by making the science plausible, but not letting real physics get in the way of a good story!

I enjoyed reading this, and plan to read more Verne adventure novels in the near future. Recommended.