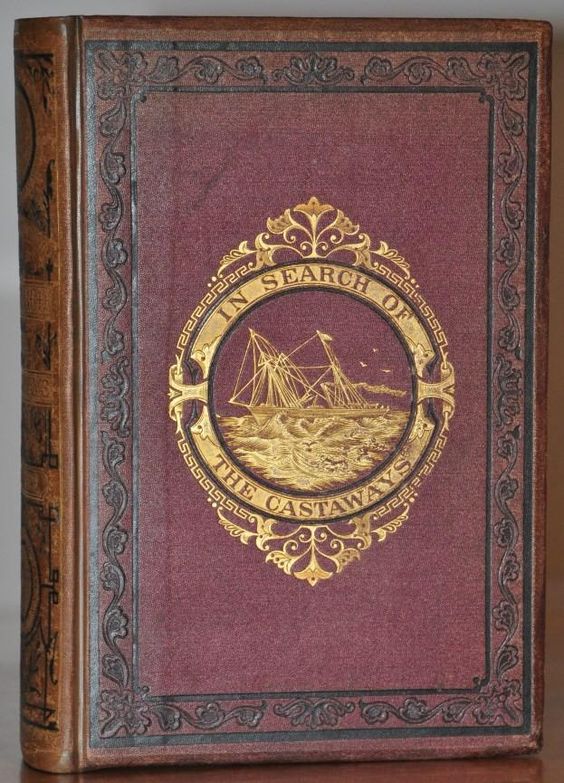 An early edition of this book in English, probably from 1873. The original French edition was first published in 1867-68, it was Verne’s fifth adventure novel. I read a free digital version on iBooks.

Like “Five Weeks In A Balloon,” this is an episodic travel adventure, but this time with a more important goal, to find and rescue the captain and two men of a wrecked Scottish ship. As the story opens, Lord Edward Glenarvan, his wife Lady Helena, his cousin Major McNabbs, and the ship’s crew under Captain John Mangles are on board The Duncan, a new sailing/steam ship owned by Glenarvan. It’s on a trial run in the Firth of Clyde. A large shark is spotted, and on a whim, they decide to catch it. Inside the shark is a worn but whole and sealed bottle, and inside the bottle is a handwritten message from Captain Grant of a long-missing ship, The Britannia of Glasgow, asking for help. The message is tattered and much is missing, but one thing is clear, Grant and his ship have been wrecked in the southern hemisphere on the 37th parallel, which runs primarily through southern South America and Australia, as well as New Zealand and some smaller islands.

Lord Glenarvan puts notices in the papers looking for information about Captain Grant, and soon his two children arrive, Mary and Robert. Mary is an older teen, Robert a younger one. Lord and Lady Glenarvan, touched by the children’s hopes and fears for their father, decide to take their ship, The Duncan, in search of the castaways, and Mary and Robert convince them they should come along. Once they’re well underway to South America, where they’ve decided to search first, an unwitting stowaway turns up: French Geographer Jacques Paganel, who it turns out got onto the wrong ship in the night, and has been asleep for several days. When Paganel finds out the ship’s mission, he volunteers to join their expedition willingly, adding his knowledge of the world to their resources. Paganel is a cheerful, somewhat absent-minded fellow who produces some laughs and is soon a friend to all.

This is a very long book with three main sections: the searches in South America, Australia and New Zealand. There are many exciting adventures and thrilling events. The party (or some of them) cross the Andes in South America, then the pampas, where a flood strands them in a giant tree. Later the tree catches fire in a thunderstorm! In Australia they are beset by bandits, one of whom has infiltrated their party, and they have great difficulty returning to their mission. Finally, in New Zealand, they are caught up in a Maori war against the British and taken prisoner. They escape with the help of a volcano. Those are just a few of the more memorable events.

This was a fun adventure story, despite the unlikely starting point. How did a shark from the south seas get to Scotland, for instance? The characters are memorable, and the many twists and turns of the plot surprising and often improbable, but entertaining all the same. I liked it more than “Five Weeks In A Balloon,” and intend to move on to more Verne novels soon.