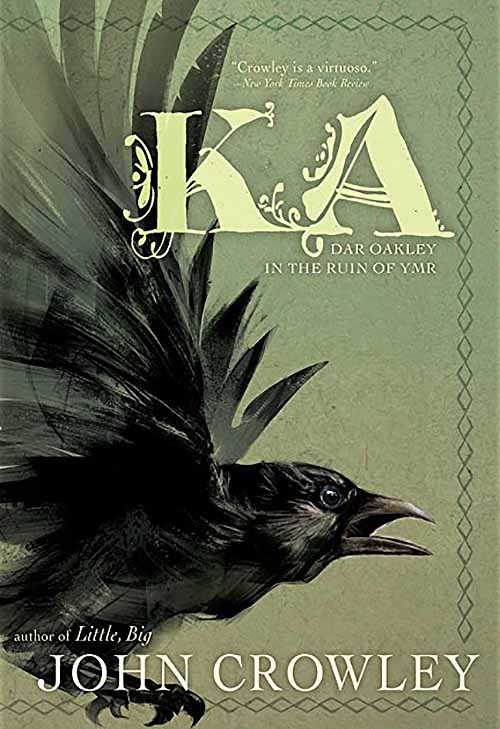 I became of fan of John Crowley with his novel “Little, Big,” published in 1981 and referred to on this cover. Still probably his best-known work. I found and read his earlier works (the novel “Engine Summer” impressed me the most) and have read many of his later ones.

“KA” is a very long novel, as are many of Crowley’s since “Little, Big,” and a crow, Dar Oakley, is the protagonist. He was born in prehistoric times in Europe in a place where there were not yet any humans, and witnessed their arrival. More than any other animal, Dar became intimately involved with humanity and several particular humans. The first of his human friends, a medicine woman named Fox Cap, taught him to speak and understand her language, and gave him his name (or helped him choose it). Later, he followed her into the spirit world of her people where he gained eternal life of an unusual kind. It’s not that Dar never dies, he does, but is long lived, and after he dies he wakes up again in a later time and gradually regains at least some of the memories of his past lives. Another human friend, a monk that Dar only knows as Brother, leads him on a pilgrimage to the westernmost islands of Ireland, and eventually across the ocean to North America. There, Dar’s lives take him through American history from pioneer times to the civil war and eventually to our own time, where he befriends the author of this book, and tells his life story through him. That friendship forms a framing device that bookends the story.

In addition to human history and time spent in magical realms, there’s also plenty about Dar’s life with other crows: first his own family, later many mates, some more important and memorable than others. The relationship between crows and humans is a common theme that goes through its own evolution.

I enjoyed reading the book, but it does tend to wander, as Crowley books do, and at times I found myself checking to see how far along I’d read, wondering how much more there was to go, which a sign that a book is not fully engaging my interest. I love birds, and I enjoy history and magic, so all the elements suggested I would be fully engaged, but the meandering of the story cooled my interest at times. There’s also an overall melancholy, a focus on death and dying and the possibilities that might happen after, and a feeling that both Dar and John Crowley are in a story that has grown too long for them. There are moments of joy and humor, moments of suspense and action, but they are intermittent.

In all, well worth reading, and recommended, but not for everyone.