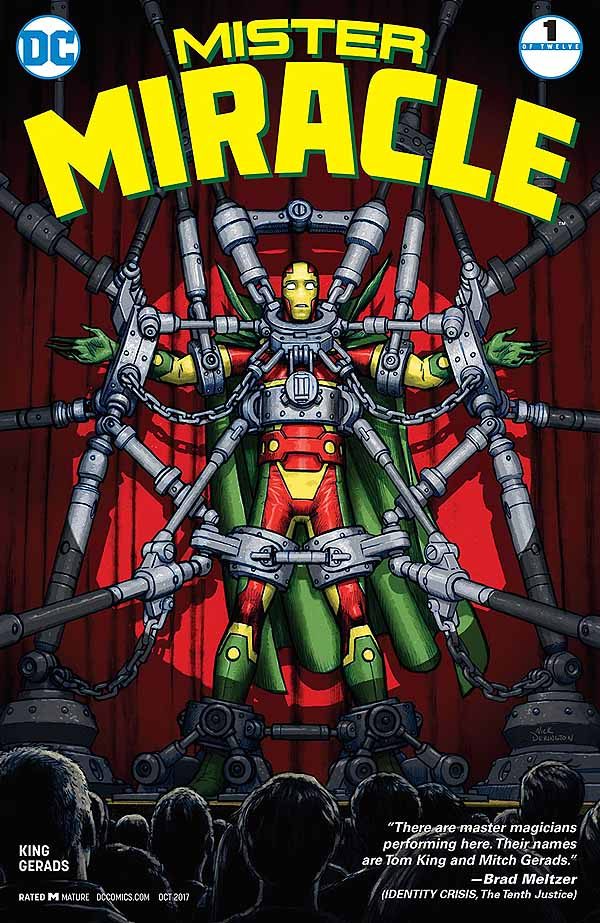 This new twelve-issue series is…interesting. What it’s definitely NOT is a continuation of the character in the spirit of his creator Jack Kirby’s original run or any later versions that tried to follow his lead. In fact, if you’re a fan of the original series, you might want to skip this one, but…maybe not.

Yes, we have Scott Free and Big Barda, as well as appearances by Orion and Highfather of New Genesis, and Scott’s performance partner Oberon, but all handled quite differently than I’ve seen before. As a sample, the opening sequence has Scott attempting suicide. We’re not quite sure why. He gives a sort of explanation that he’s bored with all his previous escapes and wanted to try to escape Death. But running through the book are a number of black panels that simply say “Darkseid is.” And visitors from New Genesis (if they are really there and not hallucinations) speak of a new threat from that quarter. In a nutshell, this is Kirby’s MM run through a filter of modern angst  in the way that Vertigo has done in the past with other Bronze Age characters, though the Vertigo brand does not appear on the book.

The art by Mitch Gerads is an interesting mix of photographic realism sometimes hidden behind various kinds of distortion, other times not. Original costumes appear at times. When the characters are not in costume, they wear modern casual clothes that add realism.

Not a lot is offered so far in the way of what’s actually going on in Scott Free’s head unless some of the story is taking place there rather than the real world.  I have to say I’m intrigued, and will read more. Can’t give this a rave, but I did enjoy it.