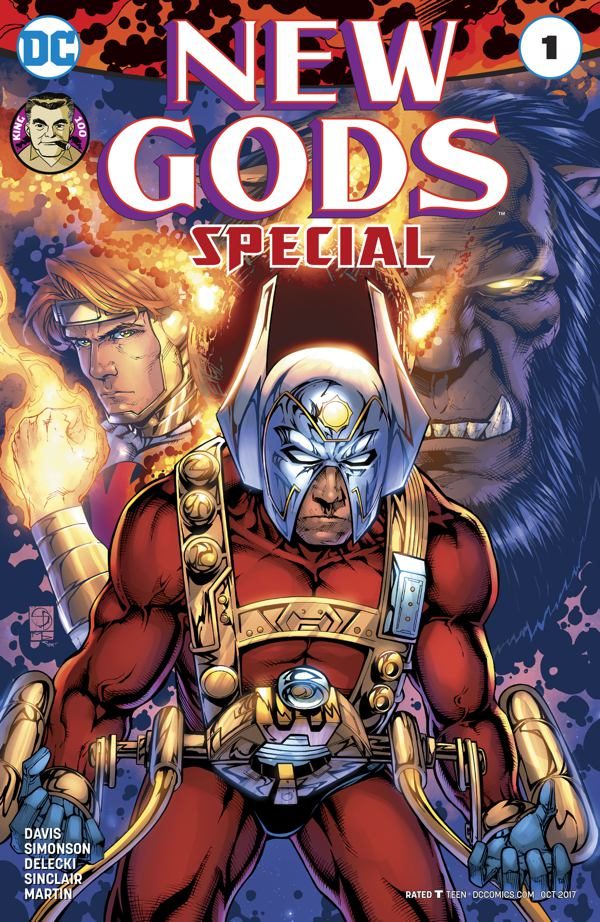 As part of their tribute to Jack Kirby’s 100th birth anniversary, DC is putting out new books featuring his Fourth World characters. This one features Orion versus Kalibak in the main story, with supporting roles for Lightray and the Bug, Forager (also in a new series) written and pencilled by Shane Davis, inks by Michelle Delecki.. The backup is a story of young Orion and Seagrin (Kirby’s Aquaman, sort of) written and drawn by Walt Simonson, and eight pages of Kirby New Gods reprints.

Davis’s main story reads like something Kirby might have written, except that it’s a retread of things he did write in the original NEW GODS series for the most part. Entertaining enough, but it misses the most essential Kirby element: breaking new ground. The art has many Kirby touches, and several visual homages like the sound effect KIIIRRRBBRACK! The figure work is more along the lines of Jim Lee and other Image Comics artists, though.

Simonson’s backup story is more original and fun, as Walter doesn’t fail to add touches of humor to balance the action and fighting, and the art, while referencing Kirby, is Simonson’s own style, itself full of energy and grace. John Workman’s lettering is part of the Simonson look, and equally fine.

The Kirby material is fairly obscure: two pinups and two very short stories featuring the New God Lonar. Even so, the unique style and energy of Kirby tends to show up much of what came before (even with Vince Colletta inking).

Not a bad package, but with more appeal to nostalgic fans of the original material than new readers, I’d say.