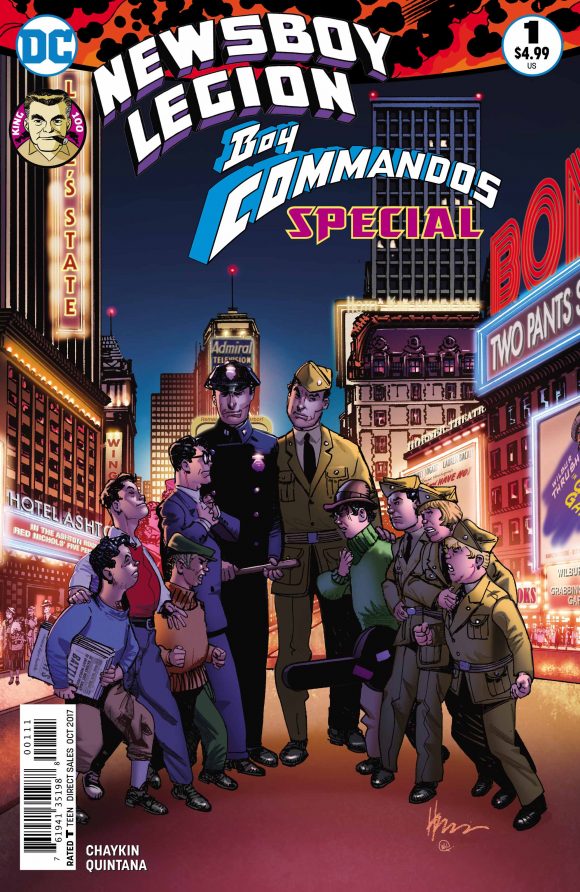 I hadn’t been paying a lot of attention to who was working on these Jack Kirby 100th Anniversary specials, so it was a pleasant surprise to find this one written and illustrated by Howard Chaykin. I haven’t read any of his comics in a while, and it was good to get back into his world. Of course, it’s also Jack Kirby’s world, or in this case Joe Simon and Jack Kirby who created the two kid gang teams for DC (then National Comics) in the early 1940s. I have to admit I’ve never read any of those early stories. I am more familiar with the Newsboy Legion from their appearances in Kirby’s run on JIMMY OLSEN in the early 1970s. Both teams are full of caricatures, kids with very pronounced accents or styles of speaking, or ways of acting that give them shorthand memorable individuality. This story pits both gangs against subversive Nazi plots and agents, and of course their stories meet up eventually. Howard does a fine job with everything, though at times the frenetic plot trumps the character moments, and individual gang members got mixed in my mind, but in all it’s a fun romp through World War Two America and Europe, when the bad guys were easy to identify. Nice to see some new lettering by Ken Bruzenak, and that Howard still works with him when he can, as he has for decades. There’s also a reprint of an old Newsboy Legion story that looks like it might be fun, but…I didn’t read it.