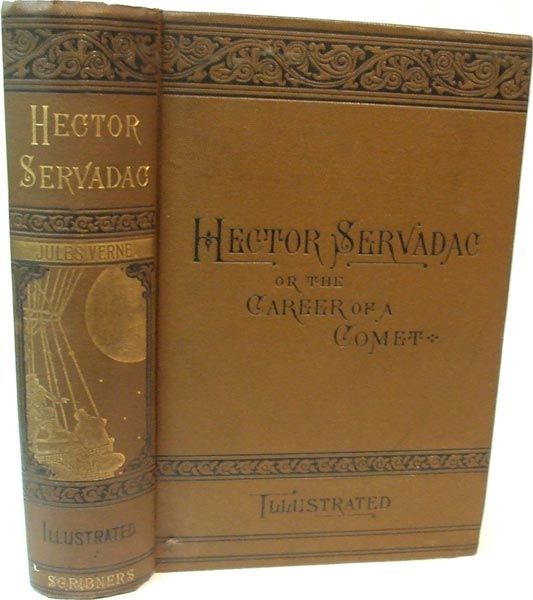 I think rather than getting into the storyline, I have to say up front that this is by far my least favorite of the Verne novels I’ve read. The concept is based on ideas that were not scientifically believable even at the time it was written: that a comet could strike Earth a grazing blow, scoop off part of the Mediterranean Sea and a few islands and bits of coastline, with about sixty human inhabitants, as well as atmosphere, and go on its way without Earth even noticing or causing much damage at all to the removed parts. Once that is past, it takes the comet passengers half the book to figure out what has happened, even though they are clearly in a much different orbit, first roastingly close to the sun, then eventually in a deep freeze as far out as the orbit of Saturn, not to mention the much lighter gravity and odd appearance of the rest of the land, nearly all metal. When they at last contact an astronomer also scooped off, things become clear, and they survive the cold passage inside an active volcano. The end of the story is even less believable, and in fact comes off more like magic than science. (Verne’s original ending was nixed by his publisher as too grim.)

What really made this book difficult to read, though, was the mean-spirited depiction of a German Jewish merchant, who Verne gives every possible negative stereotype. This comes off as pure anti-Semitism, and I see no reason for it. Verne needed a contrary character to move the story along, but there was no reason it had to be so constantly hateful. The astronomer is also contrary, but is handled in a much more positive light, and there are other national stereotypes which are much more balanced.

Previously, I only knew the outlines of the story from the Classic Comics version, which of course dodges the stereotype issue. I enjoyed reading that as a child. I should have stopped there.