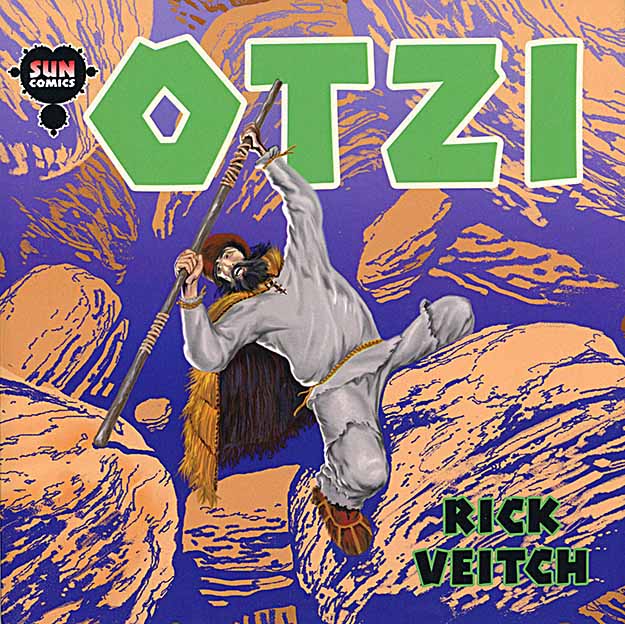 Rick has sent me his latest self-published work, OTZI. The book is square, 8.25 by 8.25 inches, 142 pages, all in black and white except the covers. There are no dialogue balloons or captions. Every page is a single large panel. It’s a wordless story except for a section about two-thirds in where newspaper stories, signs, and text messages add information.

I knew a little about the real Otzi, nicknamed “The Ice Man,” among other things, whose mummified remains were found in a glacier in the Alps near the border of Italy and Austria. He was found by two tourists, a husband and wife, who thought at first he might be a more recent fatality, but when the remains were retrieved and tested, he was found to have lived between 3100 and 3400 BCE, or about six thousand years ago. The remains have been heavily tested and investigated, and provide many insights into the time period and the people of that time.

I knew a little about that from newspaper articles, but I did not connect the real Otzi with Rick’s story until the section where some text revealed it. Rick’s story is fantasy with some science fictional overtones. At first we see Otzi as he was, in his native ice and rock environment, but he is soon drawn into a phantasmagorical experience of stones flying in formation, and a meeting with a being that seems made of energy. I won’t spoil the story by revealing more, but simply say that Otzi is brought into the modern world and soon has a cult following before disaster strikes. I don’t understand the ending, which is again wordless, but the journey was interesting and visually stunning. The book can be found on Amazon.com among other places, and I recommend it, as I do all Rick’s self-published books.