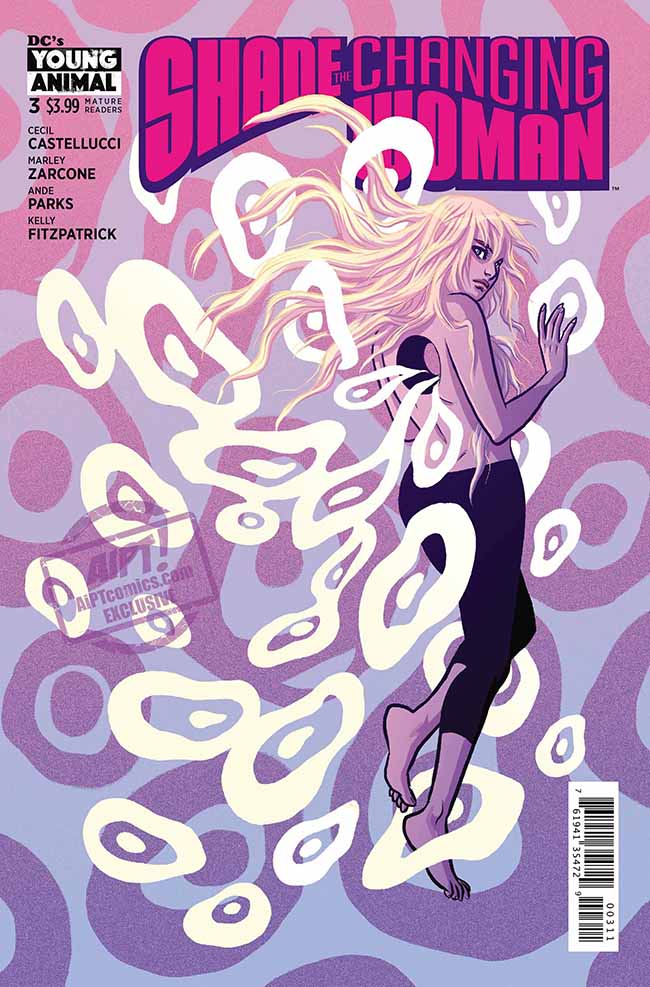 I missed the first two issues of this “second season” of SHADE THE CHANGING GIRL (12 issues) due to my digital download problems, as well as the MILK WARS crossover between Young Animal characters and DC Universe ones. I thought I’d jump in here to see what’s going on. A lot of things I don’t quite get, is what I found.

The issue opens with Shade removing her own heart, physically, but in a symbolic landscape that suggests it’s more an effort to distance herself from emotions of all kinds. The character already seemed distant from human emotions to me. She reports on her success to Rac Shade (I think), who congratulates her.

Some TV reporters are covering a fire at the home of illegal drug-makers, and the one on the scene seems to be having a madness spell herself.

Some of Megan’s high school friends are in a place where alien creatures are being held prisoner and experimented on, apparently. Where isn’t clear to me. One of them is offered the madness as a drug by a character from Meta.

Shade books and magazines are being read everywhere, and the madness seems to be spreading through them.

These are some of the events in the first half of the book, and from there it gets increasingly mad and trippy, with the madness symbols showing up everywhere, and the story getting ever harder to follow. Dramatic violence at the end suggests all is not fun in this fictional world.

I can’t recommend this, and I probably won’t read more of it, but it probably makes more sense if you start from the first issue.