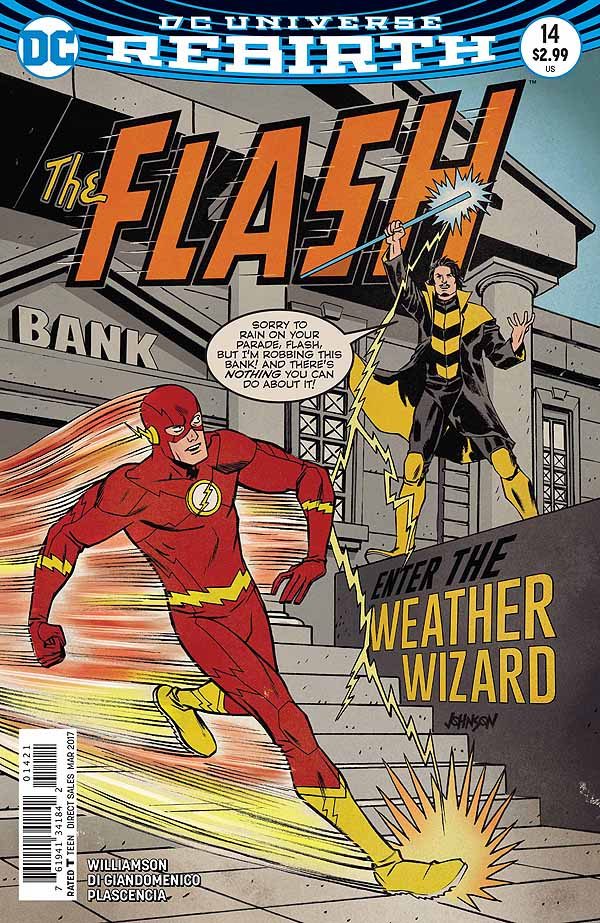 Monthly titles featuring long-running super-heroes tend to head off in new directions for a while, then circle back to about where they were. That seems to be happening in this issue of THE FLASH, from the retro cover by Dave Johnson that echoes work from the Silver Age by Carmine Infantino (and even has age-darkened colors) to the theme and character lineup: the return of Flash’s original Rogues Gallery (with a few changes). On the Barry Allen side, we have Barry once again dating Iris West, and her nephew Wally West teamed with Barry as Kid Flash, though he’s rather different from the Silver Age version.

The Rogues have been gone from Central City for a while, and newer criminals have stepped in to fill the void. We see a few of them here: Papercut, Sand Blaster and Bone Dry. I have to agree with Barry’s caption commentary, the original Rogues had better names, and I would add, better powers. Not willing to let sleeping dogs lie, Barry decides to investigate the whereabouts and plans of the missing Rogues, which takes him to interesting places and people, and ultimately to what was probably their last secret hideout in Central City. What he finds there launches this story arc.