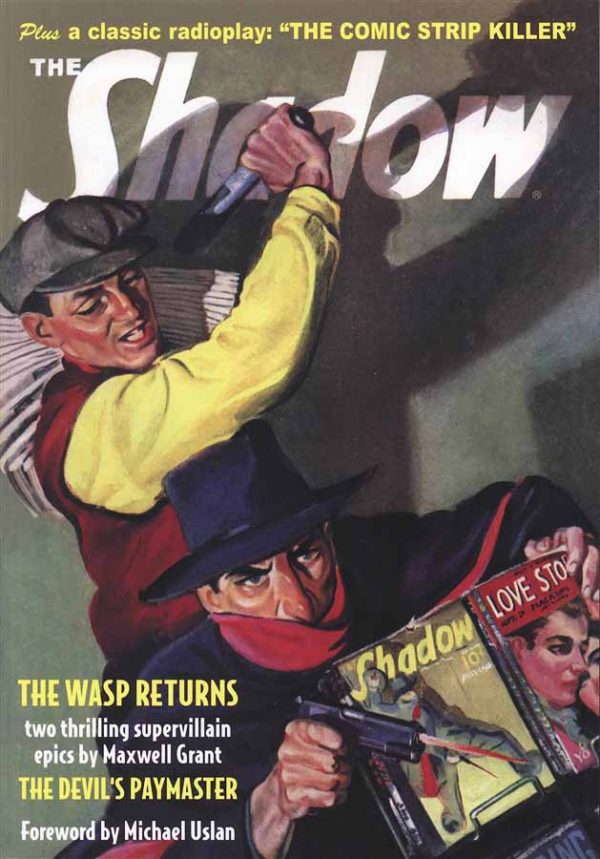 For a number of years, Anthony Tollin’s Sanctum Books has been putting vintage Shadow pulp stories and related material back into print, and Tony was kind enough to give me this one a few years ago. I’ve just read it.

Many of the Shadow stories were written by Walter B. Gibson, but prolific as he was, he couldn’t do them all. The first of these, “The Wasp Returns” is written by Gibson, the second, “The Devil’s Paymaster” is written by Theodore Tinsley, who also worked on a similar pulp, “The Spider.” I found the Tinsley story, first in the issue, to be the more interesting of the two, as it takes The Shadow to some unusual places and activities, including underwater. Both stories are heavily plot driven, and each plot is quite complicated, with lots of twists and turns, unusual inventions or death devices, many characters whose allegiance is not always clear, or is subject to change, and lots of suspense, danger and thrills. In both these stories, one gets a fuller picture of the man whose major role is that of The Shadow, but who has other lives and roles as well.

The Wasp, the adversary in his story, is an attempt to give The Shadow a worthy adversary who is just as clever and strange in his own way. It didn’t always work for me, The Wasp seems almost too strange to believe in at times, but his plans are quite clever. Some of The Shadow’s many helpers and agents appear, but none gets a lot of story time, most of the focus is on the villainous gangs and bosses and The Shadow himself. There are the obligatory elements such as a visit to The Shadow’s hidden Sanctum, his ability to appear and disappear mysteriously, his chilling laugh, and his blazing guns, all drawn from the original radio show.

Also here is a script from one of those shows with a plot involving comic strips. With a foreword by Michael Uslan and additional material by Will Murray and Anthony Tollin, this is a nice package for pulp fans, and a worthy series.