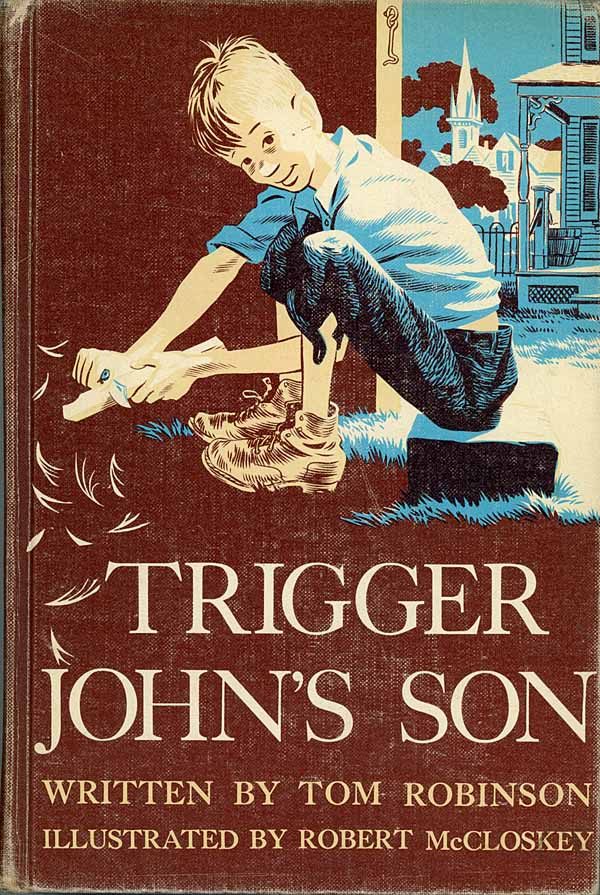 What caught my eye in the used book store was the cover illustration, which I knew immediately to be by Robert McCloskey, whose work I know from his own books, most famously “Make Way For Ducklings,” but also two books of funny stories for older readers, “Homer Price” and “Centerburg Tales.” He also illustrated the Henry Reed books by Keith Robertson, which I love. I’d never heard of Tom Robinson, and all I’ve found about him online is that he wrote two other children’s books for younger readers. This one was originally published in 1934, and this edition illustrated by McCloskey was first published in 1949. The copy I found is the eighth printing from 1966, so it must have sold well.

ADDED: See the comments for more information about Tom Robinson from his grandson.

Trigger John’s Son, known as Trigger to his friends, is an orphan, and as the book opens he’s been sent to a new foster home in Pennsylvania by train. Trigger has been shuffled through several homes, and is not sure he wants another one, so he sneaks off the train and arrives in the town later by hopping a freight train. He’s soon found new friends, a feisty group of boys known as the Goosetown Gang. After getting to know each other with a fight, they help him hide outside town in the home of “The Englishman,” a elderly loner who the boys have befriended. As Trigger gets to know more about the town and the husband and wife who have sent for him, George and Myrtle Smith, he decides they’re not so bad, and reveals himself. George Smith turns out to be a friend and ally. Myrtle is less sure of him, having lost her own son to illness, and she’s very strict with the boy, but in the end they get on okay. 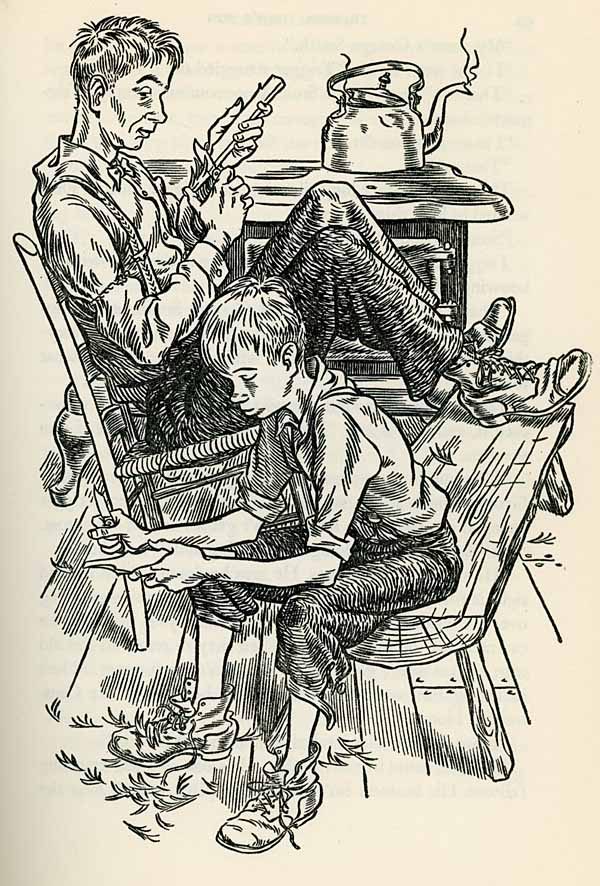 Much of the book involves Trigger and the Goosetown Gang’s adventures, along the lines of Tom Sawyer and Huck Finn, with some baseball and a circus involved. There’s the secret clubhouse ritual, the hideout in the woods, raising money to help The Englishman regain his eyesight, making trouble for the school principal after he makes trouble for them, a rival gang, a tomboy who wants to join them, and more,  all good fun, and greatly enhanced by McCloskey’s many charming illustrations. I’m surprised I haven’t run into this book before, but I enjoyed it a great deal now.

One thought on “And Then I Read: TRIGGER JOHN’S SON by Tom Robinson”