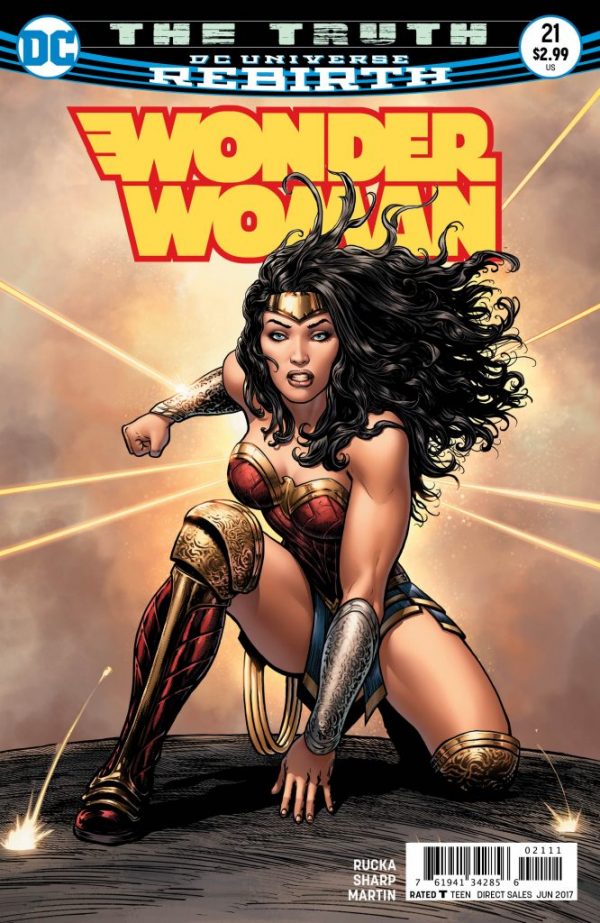 In the odd-numbered issues of this title, we are up to Part Four of “The Truth,” taking place in the present time. Wonder Woman and Steve Trevor are under attack by Colonel Maru and her guns-for-hire, and Diana has already been shot by Maru. Apparently her bullet-deflecting bracelets do not always get there in time! Meanwhile, Veronica Cale, her faceless daughter, and the godlings Phobos and Deimos turned into dogs, are arriving at a remote island in the Black Sea, where they and Cheetah hope to open a portal to Themyscira. That place where Wonder Woman was raised can no longer be reached by Diana, or anyone as far as she knows, but Cale has a plan, and she is driven by the need to get her daughter’s soul and face back. She’s been told it’s there. Meanwhile, in Themyscira, the Amazons and their queen stand before their side of the gateway ready to do battle with whatever comes forth. When Diana and Steve arrive on the gateway island, she’s attacked by her former friend Dr. Minerva, now once more Cheetah, who feels herself betrayed twice over by the Amazon. Then things really open up! Fine story by Greg Rucka, wonderful art by Liam Sharp.

Recommended. Four issues to go in this run.