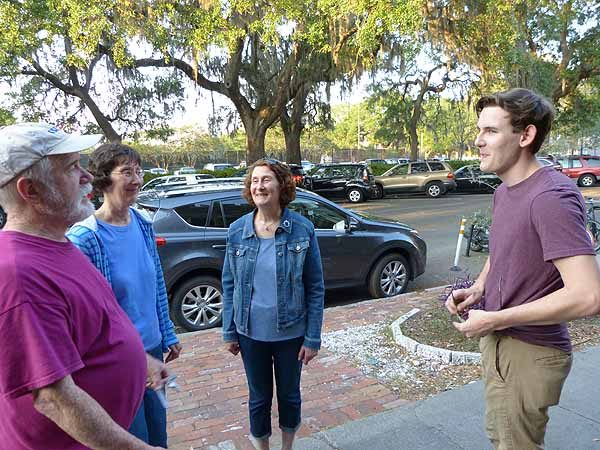 Ellen and I are visiting beautiful Savannah, Georgia for a few days with Ellen’s sister Ann and Ann’s husband Dave. Their son Zack is attending SCAD, the Savannah College of Art and Design, and we’re here for Parents’ Weekend, as well as to see and enjoy the city and area and spend time with Zack. We’re staying in half a charming Victorian house near Forsyth Park, the largest of many parks in the city. END_OF_DOCUMENT_TOKEN_TO_BE_REPLACED 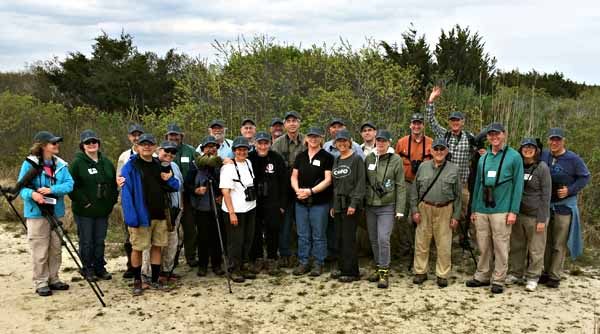 My special message and request for Earth Day! Two weeks from today, Saturday May 6th, is the annual outdoor escapade and fundraiser known as The World Series of Birding. I’ve signed up with the Cape May Bird Observatory Century Run team as I have many times in the past. It’s the only fundraiser I participate in. Along with lots of other teams we will attempt to spot as many bird species as possible on that day. The top teams will go from midnight to midnight, and cover the entire state of New Jersey. Our Century Run team’s goals are a little more relaxed: we go from 5 AM to about 10 PM and stay within Cape May County. It’s still an exhausting marathon to test one’s determination and stamina, but usually a lot of fun, too. Each participant pledges a minimum of $1 per species seen, which one can supplement with pledges from friends and family. And that, gentle readers, is where you can participate!

As in the past, I’m encouraging you to make a pledge for my WSB big day, to help me raise funds for the Cape May Bird Observatory, part of New Jersey Audubon, and their valuable mission of conservation, education and research. Current and proposed trends in our government do not bode well for environmental issues and groups, or for the birds, animals, insects and plants we share the planet with, so causes and organizations like this are more important now than ever. You can pledge any amount, but the usual method is to pledge per species seen. Last year our total was 134 species, a little better than average. A more typical total is 130 species. If we tally 130 species, a pledge of 50 cents per would result in a monetary gift of $65. A pledge of $1 per species would mean a gift of $130. As a bonus, I’m offering any of my Signed Prints as incentives: for a pledge of 50 cents per species, the print of your choice, for $1 per species, any two! Higher pledges are welcome and will garner more prints in the same ratio. Pledges lower than 50 cents will get you a signed comics trade paperback that I lettered, my choice, if you would like that. Pledges of any amount down to 10 cents per species are welcome, or if you’d rather make a flat rate donation, that’s fine, too. All pledges will support education about and preservation of New Jersey wildlife and natural resources, as well as garner my enduring gratitude!

Here’s a LINK to my blog about last year’s WSB Century Run, if you’d care to read it. And if you’d like to pledge, click the CONTACT ME link here or in the right column of this page and let me know by email. I’ll be collecting pledges until May 5th. Or, if you’d prefer, an easy way to pledge is right on our TEAM PAGE, just let me know if you’ve done that. Our team will be out there tallying on the 6th, rain or shine, hoping for good weather and lots of migrating birds. Who knows, maybe this year we’ll hit the ever elusive goal of 150 species. That would be amazing! Concluding a selection of my favorite pictures from our Alaska trip slideshow, recently reconstructed on my laptop. Denali and central Alaska this time. From the final stop on the cruise in Juneau, we flew to Fairbanks, where we took a train to the entrance to Denali National Park. From there, we rode on this bus to the foot of the mountain. END_OF_DOCUMENT_TOKEN_TO_BE_REPLACED Lindblad is a tour company that focuses on nature, and their small 62-passenger ships in Alaska are perfect for that. You get much closer to nature in a small ship, they have many expert guides and naturalists aboard, and we loved our experience with them. They’re very expensive, but we felt well worth it. END_OF_DOCUMENT_TOKEN_TO_BE_REPLACED This past weekend we did spent two nights on the upper Delaware River in northeastern Pennsylvania, staying at the 1870 Roebling Inn, above, a very fine bed and breakfast. The weather was not great, cloudy and with some rain, but we had fun anyway. The inn has property right next to the river, and from there you can see the aqueduct bridge built in the 1840s by John A. Roebling, most famous for his design of the Brooklyn Bridge. This is the oldest Roebling bridge still standing, in Lackawaxen, PA. A closer look at the bridge showing the stone abutments intended to fend off ice in the winter and some of the wood beams holding the roadway. Ellen and I on the walkway, a composite of two photos that don’t quite line up. The most interesting thing about the bridge is that it was built for canal boats, and was originally filled with water and part of a canal system following the Delaware and other rivers connecting the coal mines of Pennsylvania and navigable parts of the Delaware further south. It’s now open as a one-lane car bridge from PA to New York State. The original woven wire cables made by Roebling are still supporting the weight of the bridge. We enjoyed walking across and back and reading all the informational signs. Back at the Roebling Inn, this pair of Bald Eagles were our neighbors the first day we were there, sitting on a dead tree not far from the Inn. This area supports many Bald Eagles in the winter, where they can catch fish in the river unless it freezes over. Just down the street on the river is the Zane Grey Museum, which we enjoyed touring, also an information center for the Upper Delaware preserve. I read a few Zane Grey novels as a teenager, and enjoyed them, but was never a big western fan. It was interesting to learn that Grey, like many successful creators, was obsessed with his work, often writing around the clock in his study to finish one of his many novels. He was also quite a good artist. Illustrations he did for his first book (not a western) were on display. Grey was also a worldwide traveler-explorer, fisherman and travel writer, as well as the initial author of the newspaper strip “King of the Royal Mounted” based on one of his books. Comic book versions of the feature were on display. Grey only lived here a few years, but owned the house all his life and is buried here. About a half hour drive north is the Museum at Bethel Woods, site of the 1969 Woodstock Music Festival, with lots of great exhibits and video clips about the festival, its creators, the musicians who played, and the 1960s in general. Forty-seven years later, I finally made it to Woodstock! Where is everybody? In the summer of 1969 I had just graduated from high school and was preparing for my first year of art school. I had a summer job that was needed to provide money for school, and I didn’t know anyone who was going to Woodstock. When I saw the film a few years later, I felt like I’d missed out on a once-in-a-lifetime experience, but looking back at it now, I’m guessing I wouldn’t have had such a great time if I did get there between the crowds, lack of food and facilities, torrential rain, and other hazards, but I still kind of envy those who were present.

After our sightseeing we spent some time visiting Ellen’s family near Wilkes-Barre, PA, and stayed overnight with her sister Ann’s family in Newton, NJ, where I’m writing this. We’ll be home and back to work tomorrow after our fun and too-brief getaway.