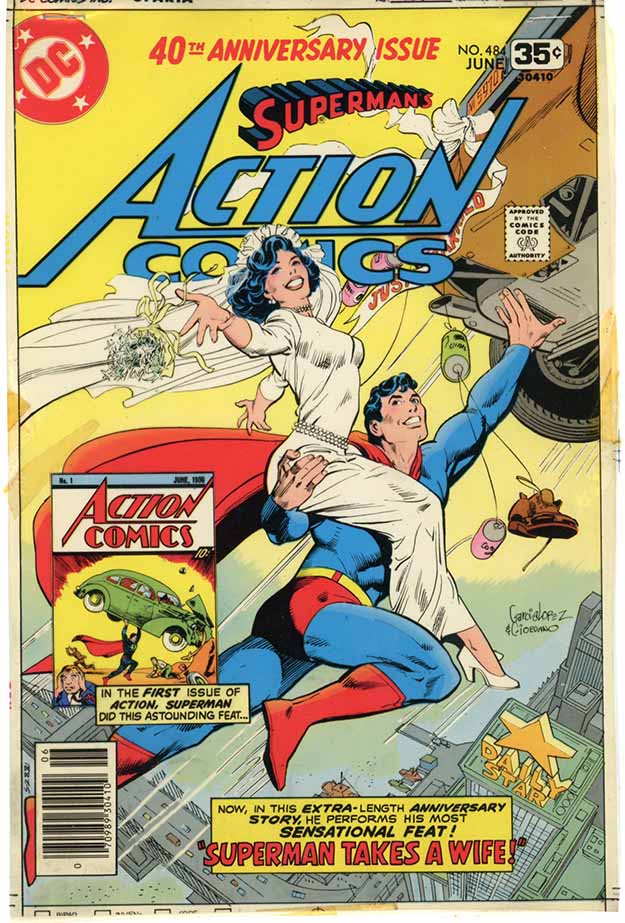 When I began working in the DC Production Department in 1977, this is what cover proofs from the separators in Connecticut looked like. Proofs of each of the four color plates (Black, Cyan or Blue, Magenta and Yellow) were printed on clear acetate, and lined up correctly over a sheet of white paper, then stapled either at the top or bottom. These proofs came in the regular deliveries from Chemical Color to the DC offices in Manhattan where they were checked for errors by Anthony Tollin, the Cover Coordinator, and shown for approval to the editor of the book. Tony would call Chemical and ask for any changes wanted. Printing was approved, and the separations would go to the printing plant in Sparta, Illinois. DC would receive one final proof, uncut make-readies from the press before the book was stapled, trimmed, and shipped to distributors, but by that time it was too late to change anything, and the only option in the case of a major problem was to scrap the print run and start over. I never saw that happen when I was there. Once the book was printed, these acetate proofs were generally thrown away. I saved sixteen of them from covers dated 1978-79 because I liked the art and I thought they were cool. This one has gorgeous art by José Luis Garcia-López and Dick Giordano, which is why I saved it. They sat in a drawer under my desk at DC, and when I went freelance full time, they came home with me and sat in a drawer in my storage room. I pulled them out this week to bring to the Baltimore Comic-Con to sell. END_OF_DOCUMENT_TOKEN_TO_BE_REPLACED 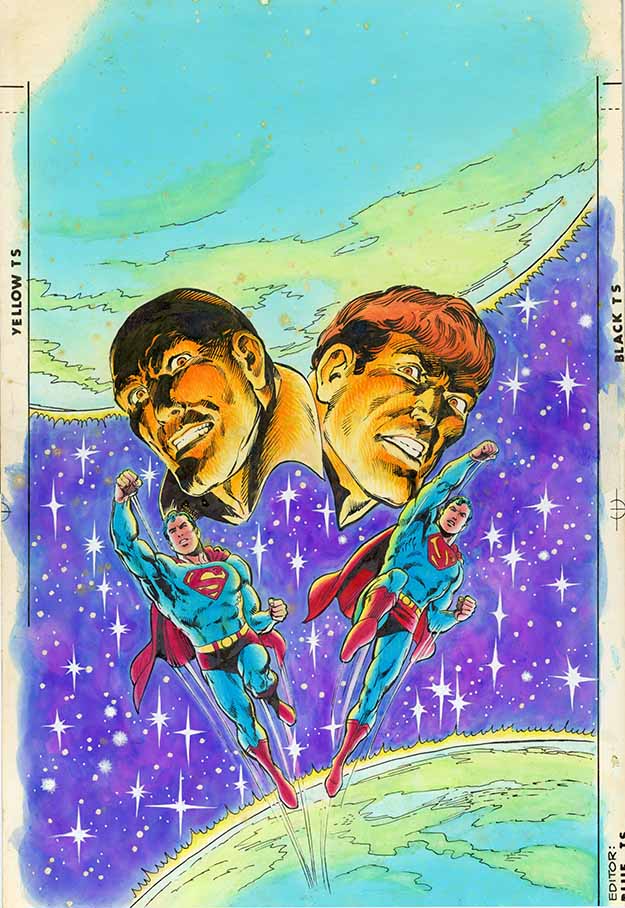 Here’s a rarity from my files, the only one of its kind, and the story behind it. While on staff at DC from 1977 to 1987 I also did freelance work, but that was mainly lettering and logo design. In the early years, though, I did whatever work was offered, including coloring, and I had my own Dr. Martin dyes coloring set, as seen in THIS blog article. By early 1982 I wasn’t doing much coloring (I never did that much anyway) when this cover art pencilled by Rich Buckler and inked by Dick Giordano came into the production department. It must have been very late, there wasn’t even time to have a color guide made and send it to Chemical Color in Connecticut for the usual color separation process. They wanted someone to do painted color, and probably overnight. I volunteered, and they must have been desperate because they gave me the assignment, despite the fact that I had never colored a cover for DC, nor had I ever done painted color for the company. I had done some on my own, but not for comics. A large photostat was made of the art, 11 by 16 inches with extra space at the top in case the proportions weren’t right and they needed extra room for the trade dress. This photostat was dry-mounted on a piece of illustration board, and I took it home to work on.

I already knew from experience that getting smooth colors on photostat paper was quite difficult with some of the Dr. Martin dyes, but fortunately the sky-blue one did go on smoothly, so I was able to use that at the top and bottom. On the large Luthor heads, I at first struggled to get smoothly blended tones, then hit on the idea of using thin brush strokes, which worked much better. The costumes of the two Supermen were small enough that the uneven color variations didn’t show very much.

The background was the biggest challenge. There were no stars on the original art to paint around, and even if there had been, going around little white areas with dyes was too time consuming. I filled the space with purposely mottled purples, several shades, to give it depth and used the uneven color application as a feature. I then tried to paint the stars over the color with Pro-White paint, but the colors were hard to cover, and the stars were lavender rather than white. The only choice left was to cut them out, and that’s what I did. With an exacto knife, I cut the top layer of photostat paper on each pointed star and the larger round ones, and then peeled it off with the knife. I was an expert with an exacto knife at the time, since I used it every day for art and lettering corrections in my day job.

I brought in the result, editor Julie Schwartz approved it, it was photographed for reproduction (not sure where, either at DC or at the separator) and here it is in print: 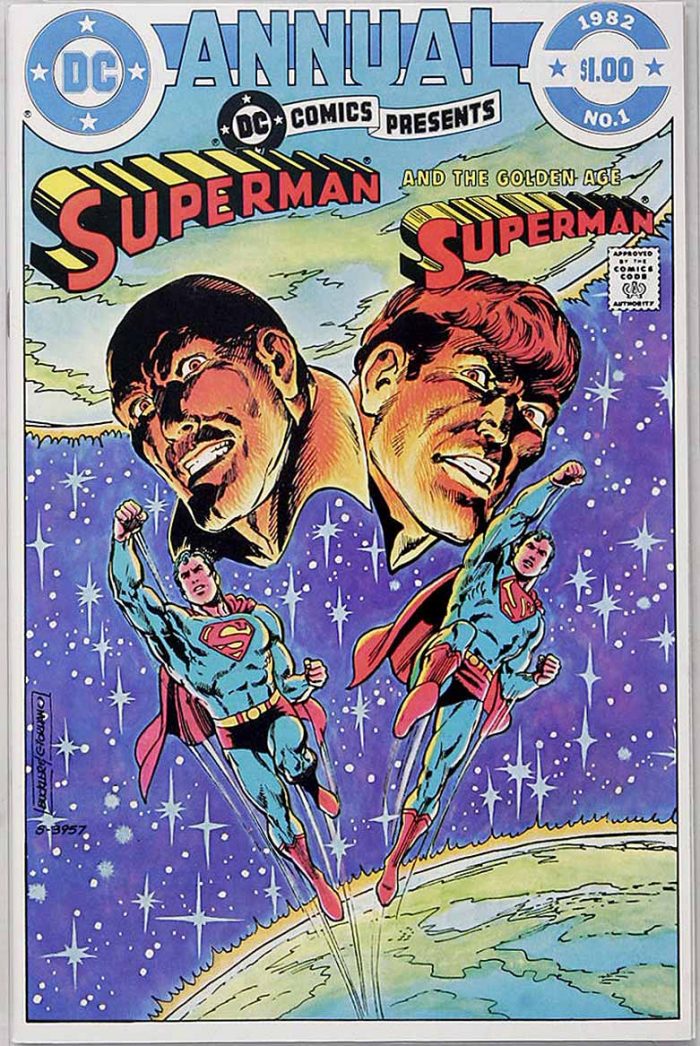 The ANNUAL trade dress frame was something I designed for all of that year’s annuals, and overall I think it worked pretty well. The colors came out different than I expected, particularly in the Luthor heads, the blue costumes and the stars, and some copies printed darker than this one, so it was far from a huge success, but as Sol Harrison used to say, it was “good enough for comics.” I wonder now if those blues in the costumes were lightened at the separator, I can’t imagine how else they’d print that light. No one was much impressed with my work, but they thanked me for getting it done quickly so it would print on time, and I was paid well. I wasn’t ever asked to do it again, though! 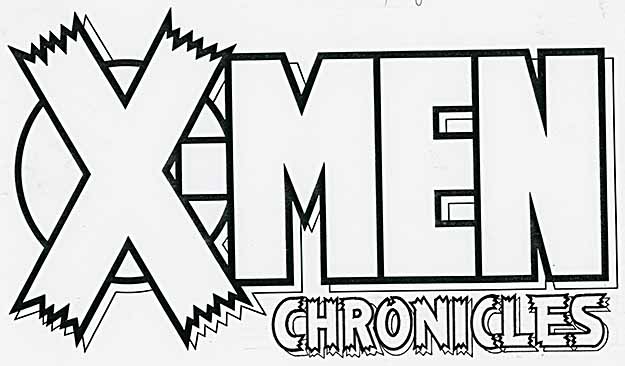 Late in 1994 I was asked by Marvel to design a new CHRONICLES tagline to go with an X-MEN logo I’d already done for them. This is the first of four marker sketches for that tagline. What I’d do in a case like this is make a few photocopies of the main logo, draw the tagline in pencil and ink it with markers. These sketches were either photocopied again and mailed to Marvel, or I might have been using my first scanner at this point. The first sketch mimics the ragged X, which itself mimics the first X-Men logo by Sol Brodsky and Artie Simek. END_OF_DOCUMENT_TOKEN_TO_BE_REPLACED 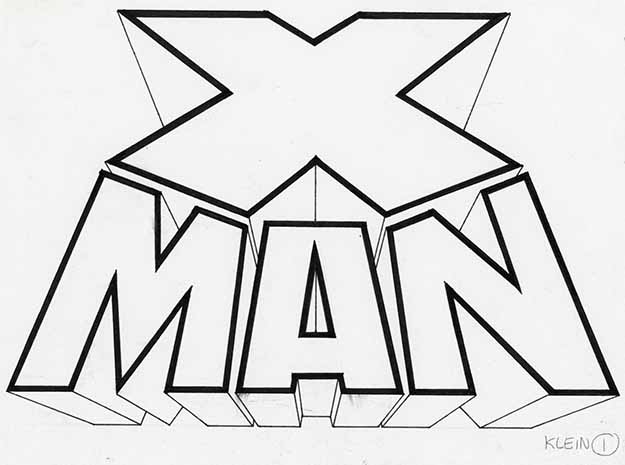 In 1994 I was doing lots of logos for Marvel. It was a boom that would soon be followed by a bust. Here are three X-Men-related ones. I did only one sketch for X-MAN, probably from a suggestion by editor Bob Harras. The design is similar to one I had recently done for X-MEN UNLIMITED, but with telescoping like that on the much earlier design for UNCANNY X-MEN by Jim Steranko. END_OF_DOCUMENT_TOKEN_TO_BE_REPLACED

This and following three images © Disney.

Today’s post is three logos that were essentially designed in one sketch, approved, inked, and sent in. First we have another Little Mermaid character logo from 1991, similar to the Scuttle design I showed last time. There are a few notes on this sketch about leaving a little more space between the I and the T and correcting the angle on the right leg of the R. END_OF_DOCUMENT_TOKEN_TO_BE_REPLACED