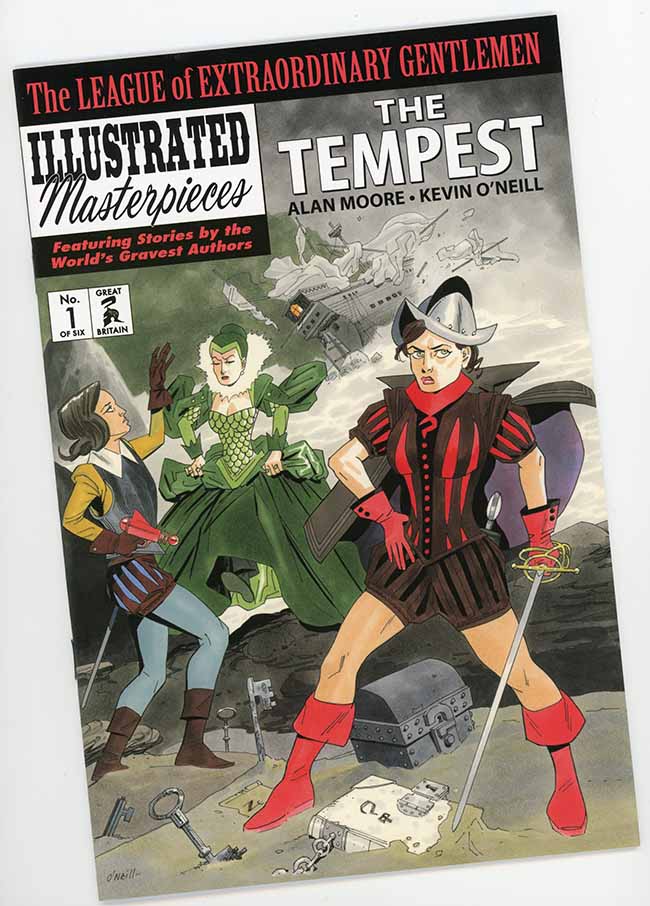 Printed copies have just arrived. This will be the final League series (six issues, 32 pages each), and the last comics work by Alan Moore and Kevin O’Neill, so they have said. Alan and Kevin are throwing lots of difficult challenges at me, both as letterer and as designer, and I’m having a great time working on it! Currently lettering issue #4. The book is bi-monthly, this first issue was originally due out in June, though the Top Shelf website now says July, so I’m guessing it will hit stores very soon. In case you haven’t been keeping track, the League series are as follows:

Volume 1: The 1898 League is formed by Mina Murray (formerly Harker) and consists of Allan Quatermain, Captain Nemo, Hawley Griffin (the “Invisible Man”), Dr. Henry Jekyll/Mr. Edward Hyde and Miss Murray. Recruited by the mysterious “M” as part of British intelligence, their main foe is a master criminal in control of the Chinese quarter of London.

Volume 2: Also taking place in 1898, the League helps oppose the Martian Invasion, as depicted in H.G. Wells’ “The War of the Worlds.” Among other menaces.

Black Dossier: In 1958, long after leaving British Intelligence, and having been followed by other incarnations of the League, Mina and Allan have returned to London in search of an infamous book, The Black Dossier, a record of all versions of the League kept at M.I. 5 headquarters. Once they find it, they are pursued by government agents and forces, even as they, and we readers, peruse the Black Dossier and learn much more about the League.

Volume 3: Century. Three long episodes taking place in 1910, 1969 and 2009, Mina and Allan, with others such as Orlando, take on a new supernatural menace to Britain and the world across the span of a century.

Nemo: Heart of Ice, The Roses of Berlin, River of Ghosts. These three short novels follow the career of Janni Nemo, the granddaughter of Captain Nemo, as she rises to take his place among the pirates and misfits that make up her family and comrades. The novels take us to Lovecraftian horrors at the South Pole, Nazi threats in World War Two Germany, and a hidden Nazi colony in South America.

Volume 4: The Tempest. The current series that promises to wrap up all the many League storylines across space and time, and in a rousingly exciting manner! Many more secrets of the League will be revealed in this tale that begins in 2009 shortly after the end of Volume 3.

Needless to say, working on this series is a highlight of my career, and I recommend it!