For years Ellen and I and Ellen’s sister Ann and her family have made a ritual and contest of dyeing Easter eggs when we visit them for Easter. We’ve always used hard-boiled eggs and traditional dyes, but sometimes have talked about trying the more difficult and involved Pysanky egg dyeing, example above found online, which uses raw eggs and non-edible colors as well as hot wax for the shapes and lines. This year we are finally trying it. My friend Tim, who’s joined in the Easter egg coloring the last few years, bought Ellen and I a pysanky starter kit for Christmas, and Tim and Ann each bought additional supplies and tools. Two weeks ago, Ellen at I tried out our set at home, results below. 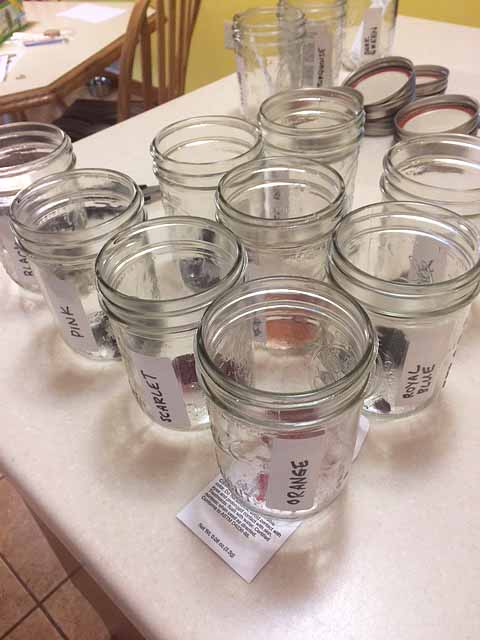 The first thing we did was to mix the twelve colors that came in dried powder form in packets. As instructed, I bought a set of 12 pint canning jars and put the colors in each one. To the powder we added 1.25 cups of boiling water and a small amount of distilled vinegar, EXCEPT for the orange, which gets no vinegar. Above, I kept the packet under that jar to remind me. I also labeled the jars to avoid confusion later. 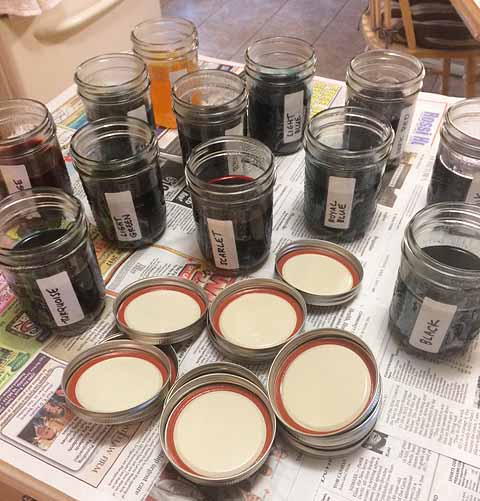 Here are the colors mixed. They had to cool completely, then could be closed up and stored. They’re supposed to be good for about a year. 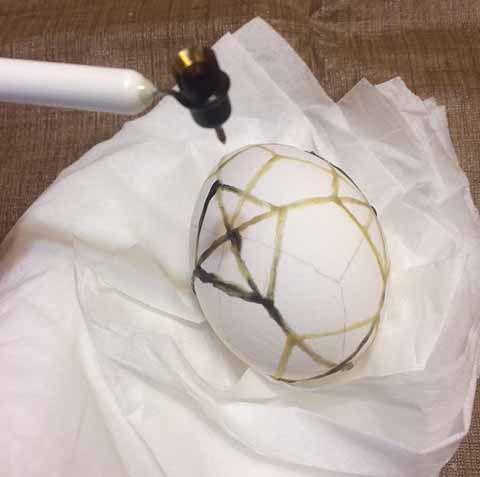 The next day we got started with the wax and dyeing. You use a writing tool that has a reservoir for the hot wax which feeds down into a tiny tube and emerges like ink from a fountain pen. With these writing tools, the cheaper kind, you heat them over a candle flame, melting a tiny amount of beeswax in the reservoir. As one might expect, this is a lot harder than it looks in the YouTube videos you can find on the subject. There’s a much more expensive electric version of the writing tool, but since we don’t know if we’ll continue with this, we didn’t get that. Common problems are: too hot writer and too much wax, which then comes out in large blobs, you can see some above. Of course, not enough heat and nothing comes out. Getting it just right is one issue, which I only began to reach toward the end. The other problem is that I was using way too much wax. There is some color in the wax from soot (and you can buy it colored black, too), so you can at least see it pretty well, and a very thin layer is all you need. I was piling it up too much, going over the lines several times. 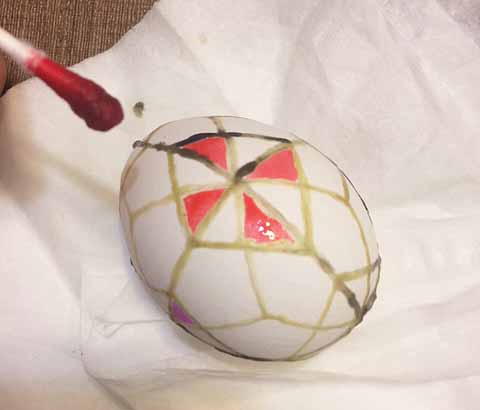 I did a geometric design of my own rather than following one of the samples in the starter kit. One trick from there I liked was to fill some areas with color using a q-tip, then covering those areas with wax to preserve them before dipping the entire egg in a color jar. You can already see my lines are quite thick and uneven. It’s a learning curve to get them even and thinner which I hope to advance on today. 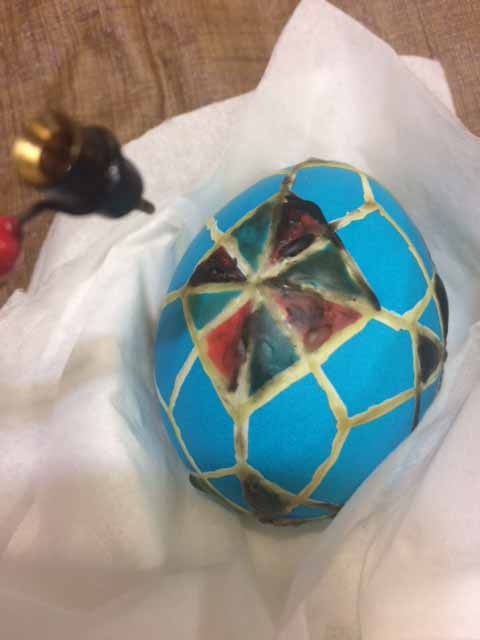 After coloring and covering some areas, I dipped the egg in the light blue dye. They call it light, but it’s more of a medium blue. The color went on well on these farm eggs I found at the supermarket. You want eggs that haven’t been scrubbed with chemicals, and you should handle them as little as possible, so you hold them with a tissue. 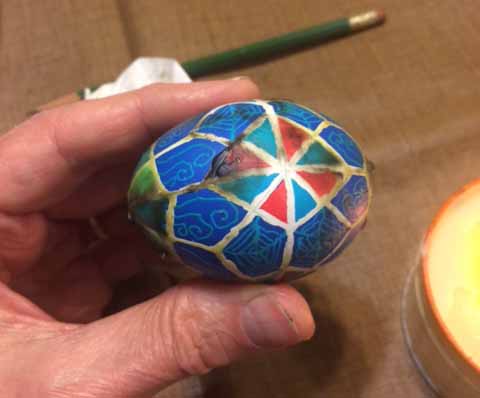 I then added some spiderweb and curly shapes with the smallest writing tool (we got three sizes), finally getting a handle on the wax flow, but still not getting even lines, then dipped the egg again in the royal blue dye. Once that was done and dry it was time to remove the wax by holding the egg close to a candle flame to melt it, and wiping the wet wax off with a tissue. Since I had so much wax on the egg, this took about a half hour, and probably cooked the egg inside somewhat, not a good thing if you want to remove it later. 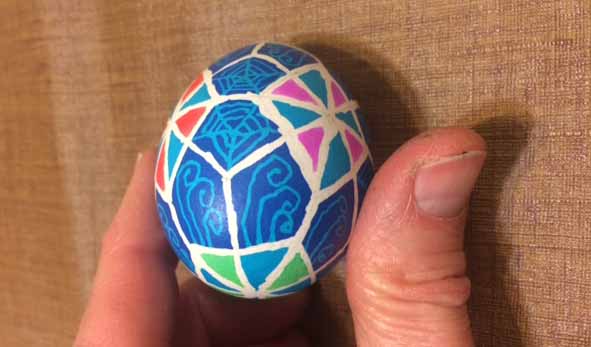 With all of the wax off except a thin, clear layer, the egg looks pretty good color wise, though not well done technically. 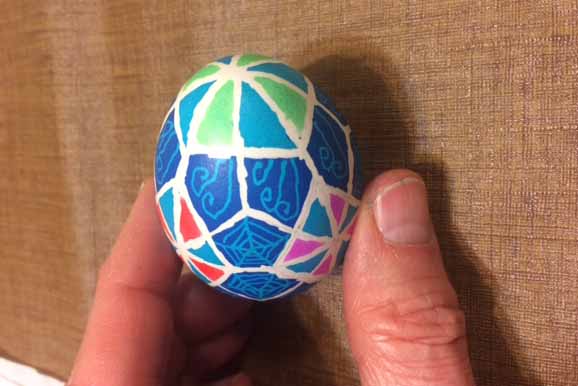 Another view. This was a good practice try, and I hope I can do better today, when we’ll be trying again, along with Ann, Dave and Tim, I think. 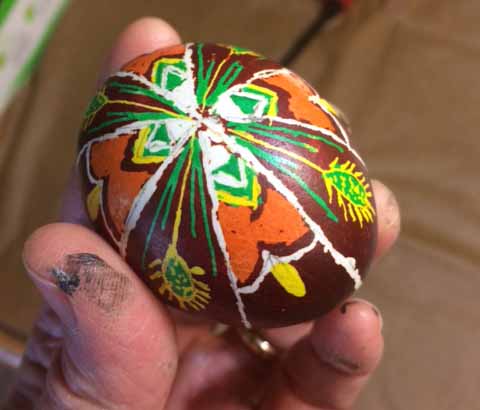 Unlike me, Ellen followed one of the step-by-step examples that came with our starter kit. Her egg looks pretty good too, again with uneven lines, but not as thick as mine. 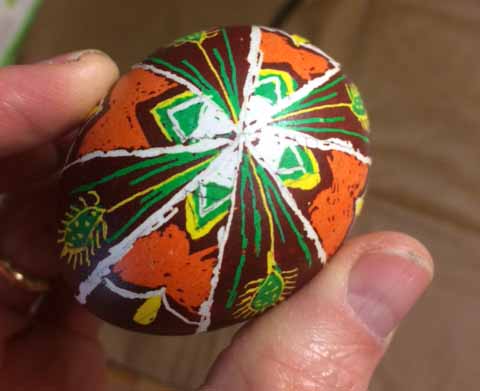 Another view. As I said, more today, and I’ll report on it here. We also plan to do traditional egg coloring as well, so we have hard boiled eggs to eat, so we’ll do that this evening if we can. I decided not to try removing the egg from the shells on these. Okay as long as they don’t fall and break! If we were going to keep them forever, I’d need to first remove the last bits of wax with paint thinner, then remove the egg inside (we do have tool to help with that), washing out as much as possible, let it dry completely, then coat the empty shells with polyeruthane varnish. They can last for many years that way. These aren’t worth saving, though Tim wants to keep mine, and I’ll give it to him. More later!