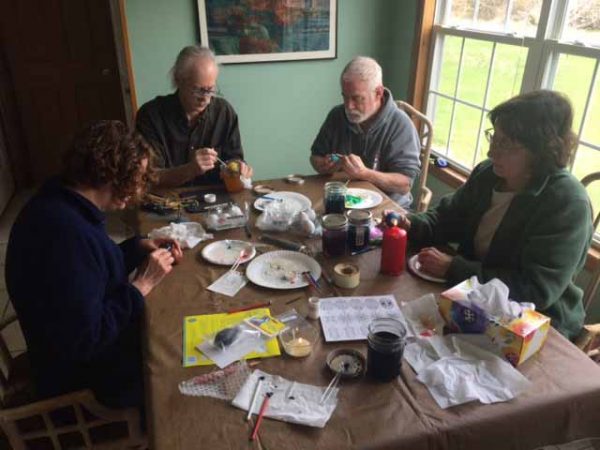 Here’s our pysanky egg-decorating group at work at Ann and Dave Greene’s kitchen table. Left to right are Ann, my friend Tim, Dave, and my wife Ellen. I sat at the near end. It took each of us many hours to create one pysanky egg. Mine was the most ambitious and took the longest, over six hours. Here’s the entire process described. 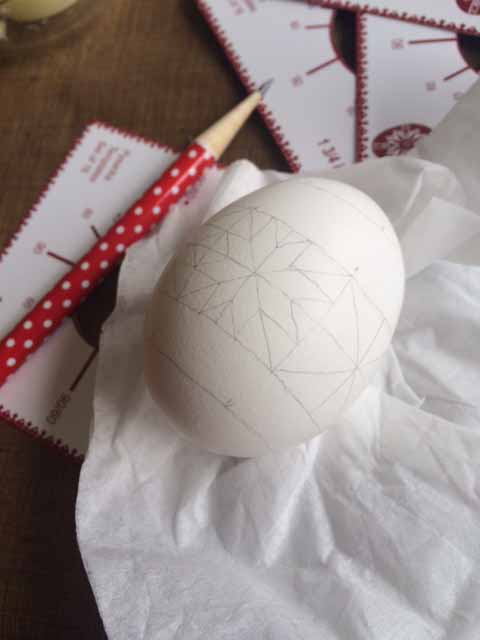 You begin by drawing a design on a raw white egg that hopefully hasn’t been scrubbed or treated with chemicals, handling the egg itself with your fingers as little as possible. I had found farm eggs at our supermarket that worked well for Ellen and I previously, so I bought and brought more. On my first egg I had made up my own geometric design, but wasn’t too happy with the result. 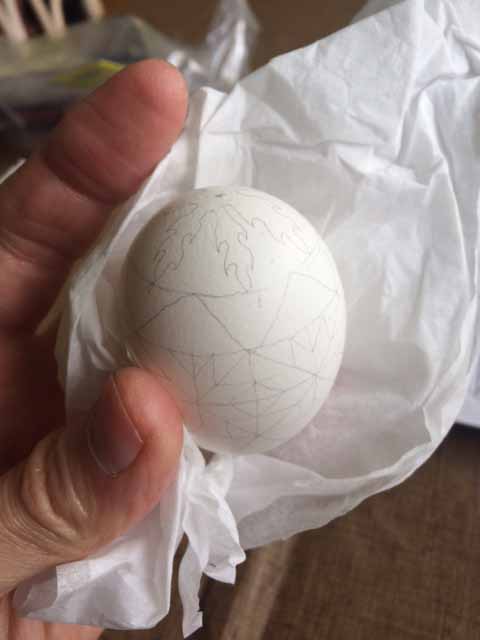 This time I followed a design from the how-to book that came with our set by Luba Perchyshyn. Her Ukrainian Gift Shop website is the source of the starter kit and other tools we used. Luba is 93 this year, and lives in Minnesota. She’s been doing this a very long time, and her book and tools worked well for us. You can read about her HERE. Though I followed one of Luba’s designs, I ended up changing some details either by accident or intent, so the end result is about 90% from the original design. Ann had ordered some circle templates in a wide variety of sizes from Luba, and I tried using these for the horizontal circles. It helped some, but they are printed on thin cardboard. Plastic circle templates that I have at home would have worked better if I’d thought to bring them. Luba’s templates did help me divide the egg into six equal sections, though. 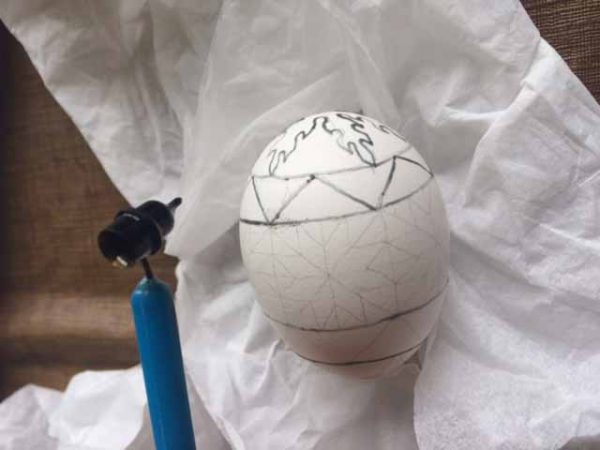 Next I began going over the pencil lines with the medium-size writing tool or kistka, filling the reservoir with beeswax, holding the writing tip in the edge of a candle flame until it was hot and the wax flowed out of the small hole evenly. I did better with the wax flow and line control this time, and I can see where it’s something that would improve with practice. Always testing the flow on a tissue first helped prevent big blobs, and we used thin strips of black wax this time rather than cut-up chunks of untinted wax. The latter does get a color from the candle soot, but having the color already in the wax made it easier to always see where you’d put the lines down. A small quarter-inch length of the wax strip was perfect to fill the reservoir and fits right in, much easier. When it’s the right temperature, the wax flows rather like a fountain pen or a technical drawing pen, but you need to keep warming it in the candle flame and testing the flow as you go. There are several rounds of this. All the lines drawn on the white egg will, of course, be white lines on the final design. You need to think in reverse, sort of like scratchboard art. 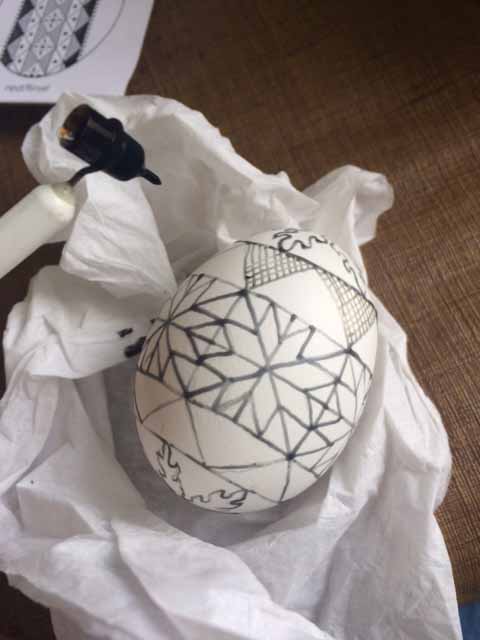 The first layer of wax drawing further along. I’ve finished all the main design lines with the medium kistka and am now using the smallest kistka for the crosshatching in the triangles. Those textured areas add a lot of detail and interest to the design. I did make a few mistakes by going too fast, and one large wax blob that I was able to mostly remove carefully with a pen-knife, but generally it went much better this time. 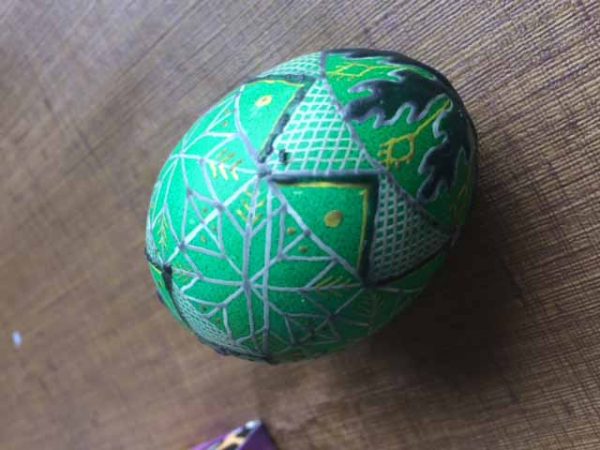 After finishing the first and largest set of wax drawings on the white egg, it went into the yellow dye for five to ten minutes. Then the egg was taken out and dried with tissues. When it was all dry, the second round of wax drawing was done. Those lines would all be yellow at the end. Next the egg went into the light green dye, and more areas were waxed. This was mainly a matter of covering up areas that should remain green, so I used the largest kistka to do that more quickly. The leaf pattern at each end of the egg was the largest area that would be solid green. 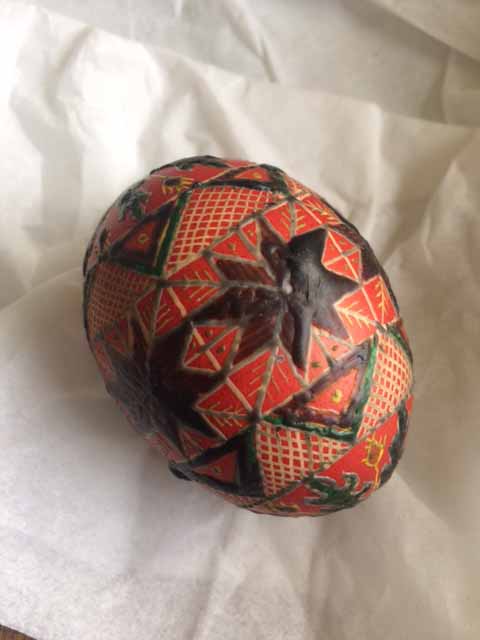 The next color was orange, which surprisingly removed nearly all of the green dye. One of those things you wouldn’t expect, so following the step-by-step was key. More lines drawn and areas covered, then it went into the scarlet dye, and the process continued. The photo shows all the wax now applied over the scarlet dye. The star and triangle shapes would have the red color preserved. One final color was added as a final dyeing step, black. This is the coolest one because it’s so very different from anything you can do with regular edible egg dyes. It wasn’t in Luba’s design, but I wanted to do it anyway. So, everything not wax covered in this photo would become black. 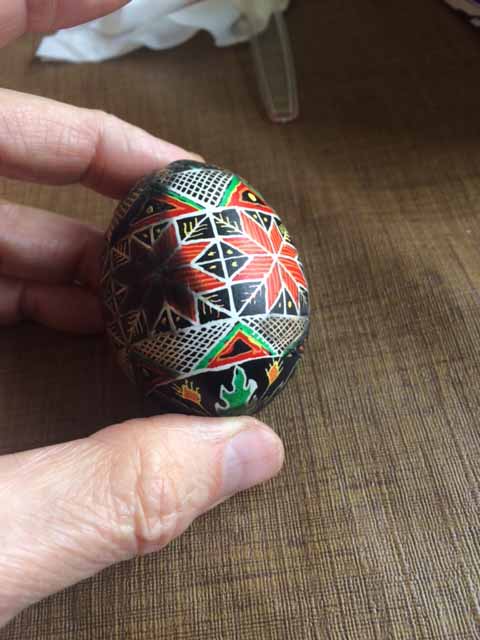 The next step is to remove all the wax by holding the egg very close to, but not right over, the candle flame to melt the wax. then you wipe it off with a tissue. This takes a long time, but is the most fun part as you get to see the final design gradually revealed. If you get the egg right over the flame, soot will form on the surface, not a good thing, but it does wipe off, though not easily. When you’ve melted off all the wax you can, there’s still a thin layer that is removed with mineral spirits. 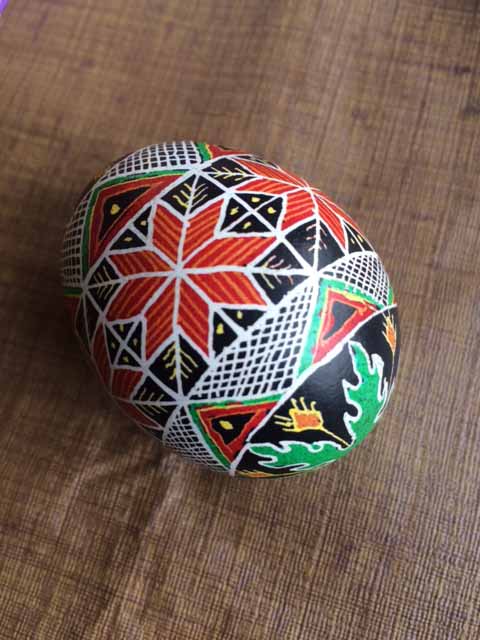 Here’s my egg with all the wax removed, and I’m very pleased with the way it turned out. Sure, some lines are a little off-model, and there are a few mistakes on the other side, but in all it’s impressive. 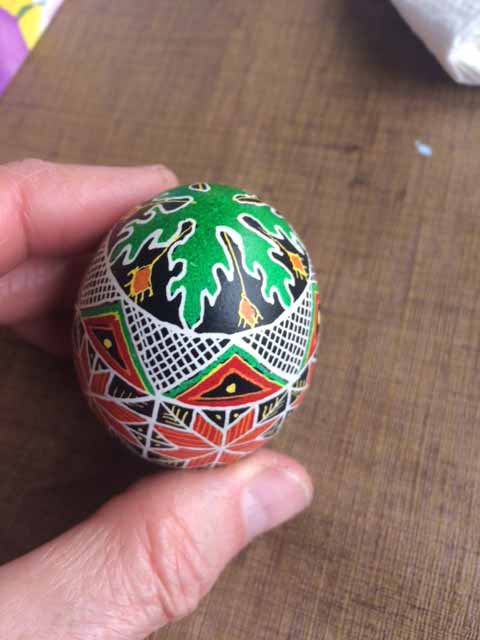 A view of the leaf and stem design at the top. Luba’s design had more detail in the stems, but only four leaves. Mine left less room between the leaves, so the stems were simpler. I added extra elements to the triangles, though. 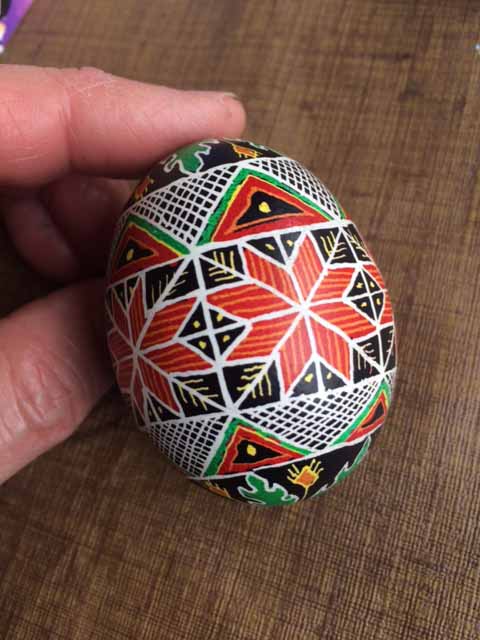 The star shapes are my favorite part, they worked out very well. I added the orange lines in them. 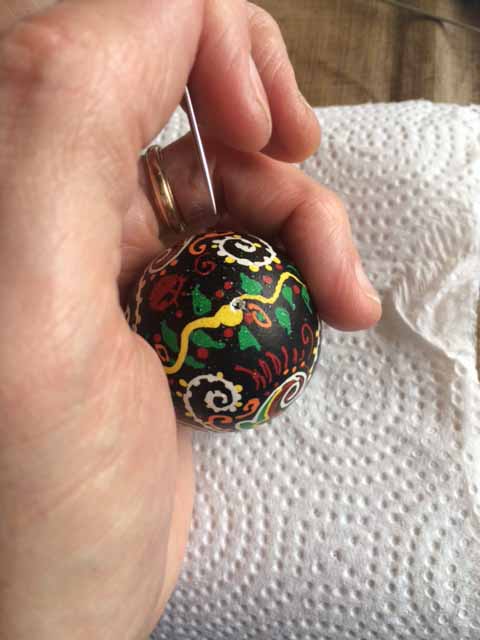 The next step for a shell you want to keep is to make small holes in each end so you can remove the egg. I found the best way to do this was to gradually scratch and gouge out a tiny hole with a very sharp sewing needle, then enlarge it with a nail. Tim used a hammering method with the needle which worked okay, too, but made me too nervous to try. After all that work, you really don’t want to crack the shell. 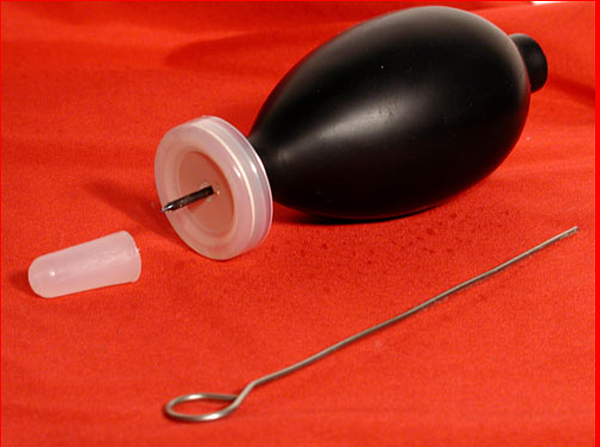 We had a tool from Luba that Ann bought, Aunt Marge’s Egg Blower that uses a rubber bulb to pump air into the egg and push the raw egg contents out the other end. The pin is to break up the yolk first. This worked fine. Tim also tried the older method of blowing out with air from his mouth, kissing the egg. That worked, too. 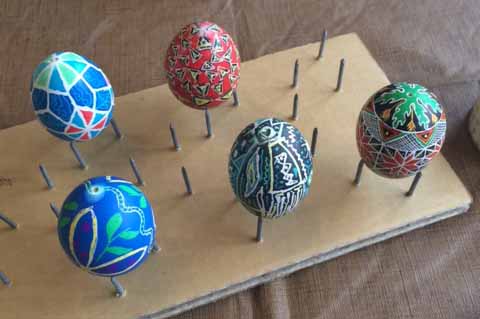 The empty shells were put on this drying rack Tim made. They have to dry completely inside and out before you do the final step, coating the shells with polyeurythane varnish. Ann’s egg had a mishap, so is not here, it was out in the garage getting some repair work. Below are all the finished eggs. 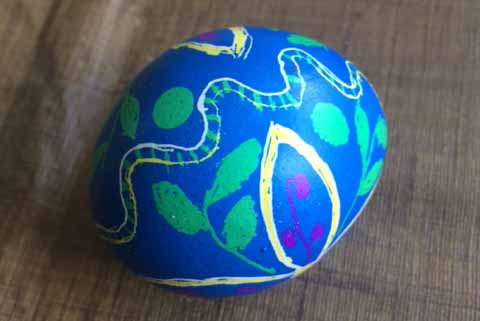 Ellen’s egg used the royal blue background color, very pretty. It’s a design she made up using ideas from the book or other psanky books Tim brought. 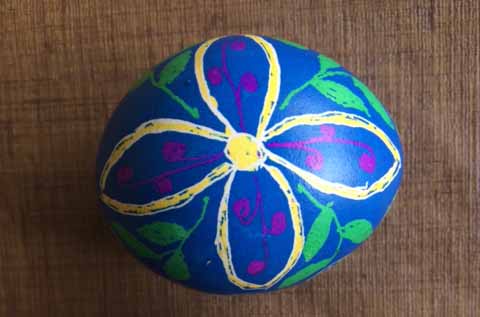 Here’s the full flower design on one side. 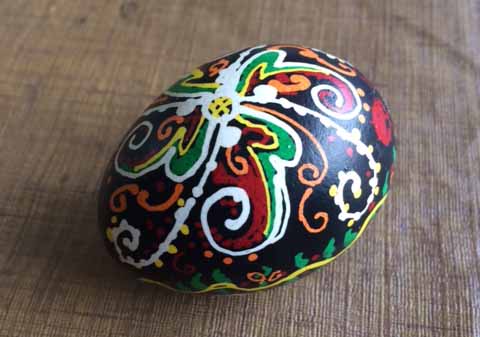 Ann’s egg uses a design she got from a YouTube video how-to. She had the video on her laptop and would do a layer, then run the video to show the next layer, until it was all done. It’s a Ukrainian design, but a looser and less geometric one, that I think turned out great 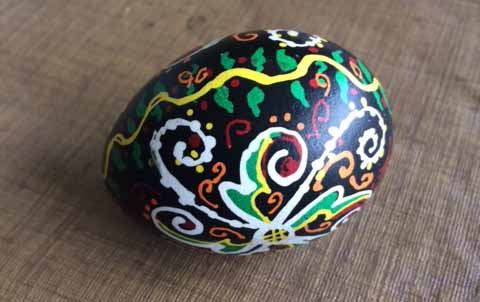 Ann had some trouble with blobs in the wax, so she added more to make a feature out of them rather than a mistake. Ann is clever that way! 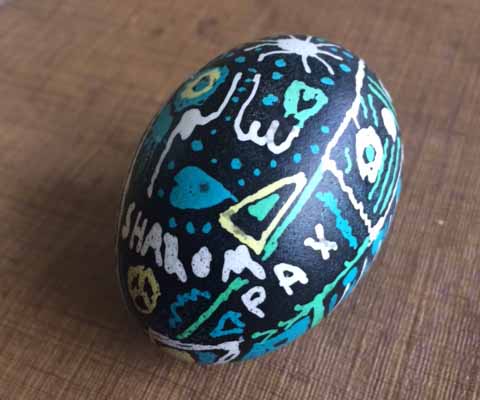 Dave winged it with a freeform design he made up as he went along, and Ann gave him advice on color choices. This has a modern-art feel that we all liked. 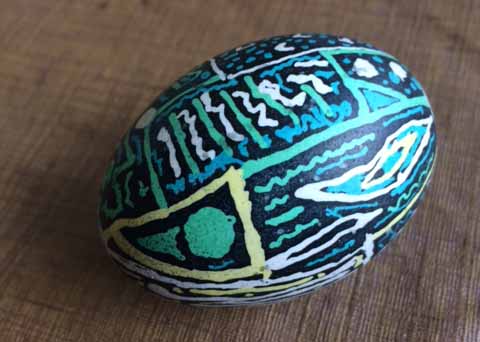 Another view of Dave’s design. The dark colors is a mix of royal blue and black, I think, very effective. 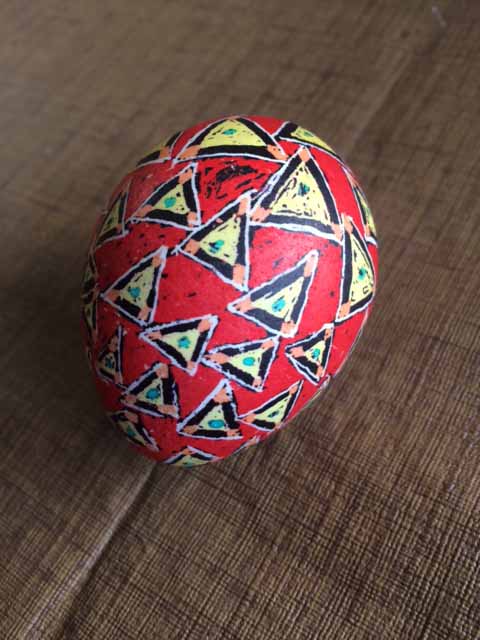 Tim used a design from one of the egg-decorating books he brought that has a somewhat art deco feel, geometric shapes but less rigidly organized and symmetrical. We liked it, too. We liked all the designs, and everyone thought it was a fun project and wants to do it again next year. We might even get some electric kistkas, which are supposed to be easier to use than the ones we have. We’ll see how we feel about it next Easter.

This took most of the day, but we also did traditional egg coloring of hard-boiled eggs after dinner. I’ll have a full report on that tomorrow. Happy Easter, everyone!