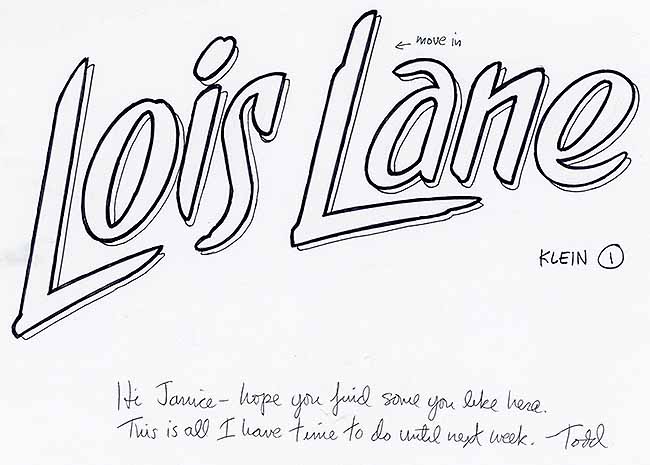 In 1996 I was asked by DC’s licensing department to submit designs for a new Lois Lane logo. Either they suggested something very different from the original block-letter Ira Schnapp logo:

or that was my idea, I don’t recall. My first marker sketch, above, was meant to suggest Lois’s handwriting or signature.

My second idea was along the same lines, but using a script style. Both of these are quite tall, but as they were not meant for a comic book cover, I thought that was okay.

By 1996 I was doing some logo treatments completely on my first Mac computer, and the rest of these sketches were done that way. This one uses a font called Isadora Bold, which again suggests handwriting, but in a much more formal and elaborate way.

Here’s the same thing on torn piece of ring-bound notebook paper. Not sure what my idea was, it’s a mismatch, really.

Another idea using the font American Typewriter. This is a more interesting approach, and I probably had fun creating the background story supposedly written by Lois. This font, in the bold weight, is rather balloon-like, though, and doesn’t look very much like real typewriting.

I have no record of being paid for any Lois Lane logo in 1996, so I’m guessing these were all rejected, and I was probably paid a kill fee. The only Lois Lane toy I can find uses the original Ira Schnapp logo.

Here’s the final inked version of another Lois Lane logo from 1986, I can’t find any sketches. The telescoping drop-shadow is overpowering, and also kind of goes the “wrong way” to my eyes now. 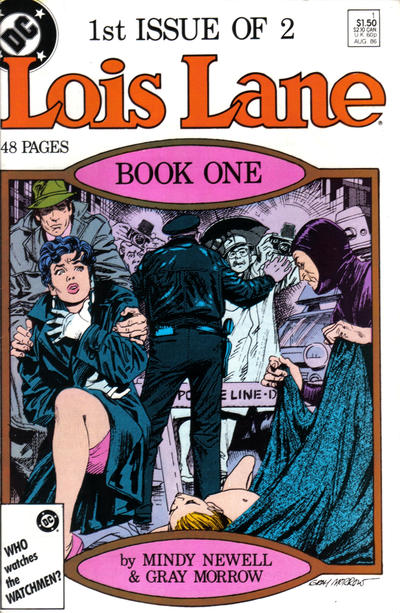 When the book was published, the drop shadow had been removed, and it looks much better without it.