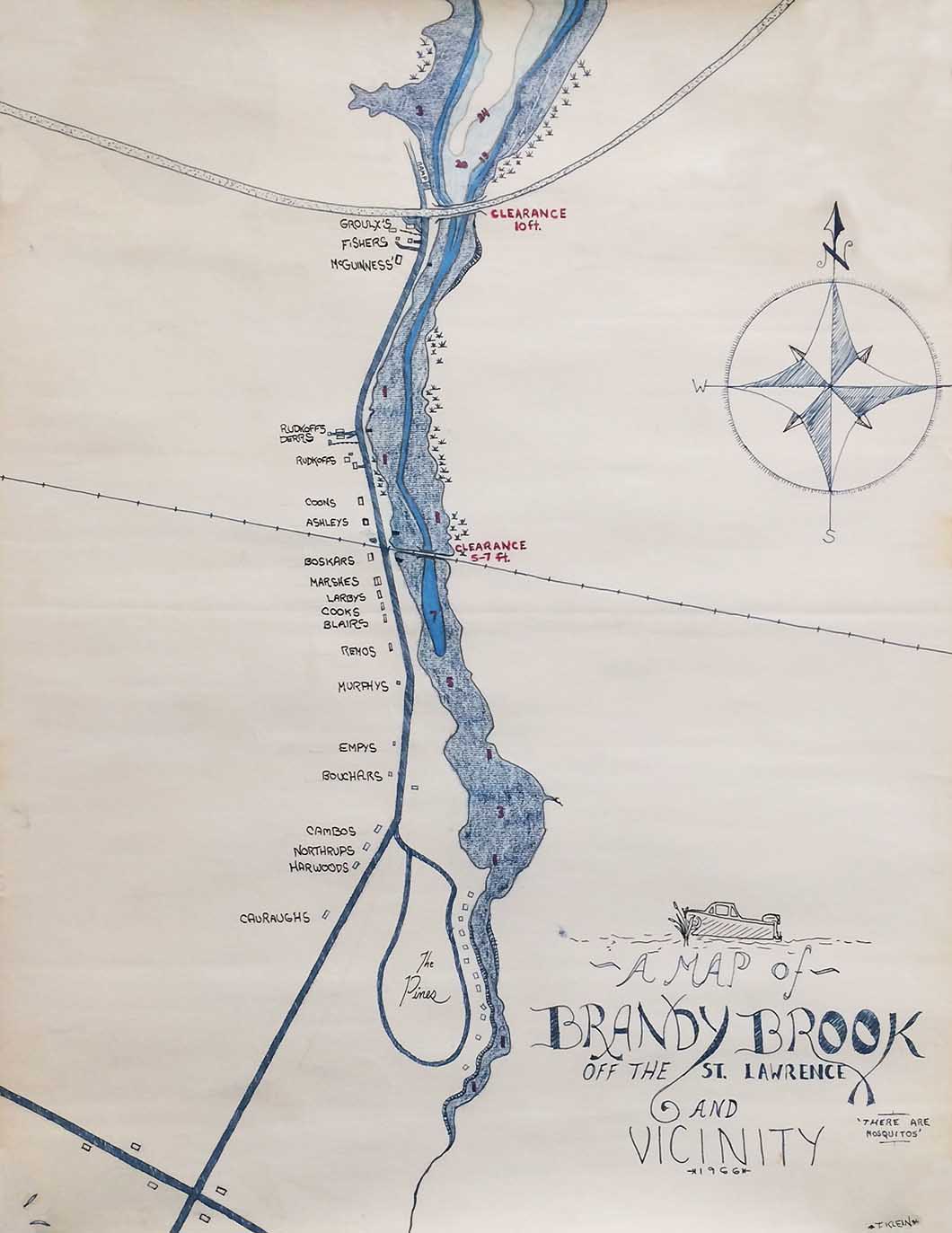 This and all images © Todd Klein.

Going through some things in our storage room this week, I came upon this map I made in 1966 of an area our family used to spend summer vacation time in, and it brought back good memories. Here are some.

My mother’s parents lived in Dunellen, NJ when I was small, but my grandfather Rex (a nickname, he was actually Leroy Derr) liked to go fishing in New York State, and sometimes my grandmother Elsie would go with him. Some time in the early 1950s, they became friends with a fishing guide named John Rudkoff and his wife Helen. After a few years of spending time together fishing, Rex and Johnny came up with a plan to set up residences next to each other. I think most of the plan was my grandfather’s, but that’s a guess. A small plot of land was bought near the town of Waddington, NY, next to the St. Lawrence River on the border with Canada, which was in the process of becoming the St. Lawrence Seaway.

By the end of the 1950s, two house trailers had been bought and put on the lot, which was about a half acre surrounded by hay fields, and just across a small country road from Brandy Brook, made navigable to the Seaway by the rise in water levels from that project. The two trailers can be seen on the map if you look closely, first buildings down from the upper corner of the road. Johnny and Helen lived in their trailer year round, and kept up the grounds and both trailers. The Derr’s trailer was used in the summer and early fall by our family, and I think we started going there around 1958 or so. 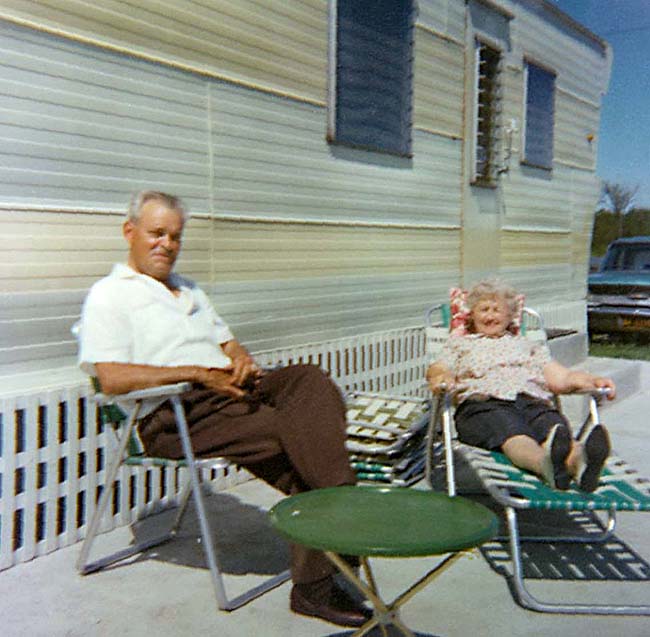 Here are Rex and Elsie Derr enjoying the sun on the patio built outside their trailer. I think that’s their Ford Galaxy 500 in the background, but it could be an earlier car. The trailer was not huge, but it had three small bedrooms, a bathroom, a living room and a kitchen, and quite a few of us could stay in it. When there was a gang, the kids slept on cots in the large garage my grandfather built at the back of the lot. My parents and my siblings Doug and Russ and I would often drive up together for a week or two, then my dad would head back to work and the rest of us stayed for a month or more. My mother’s sister Nancy and her family were also there a lot, and other family members: brothers and sisters of Rex and Elsie and their families, came for shorter stays. 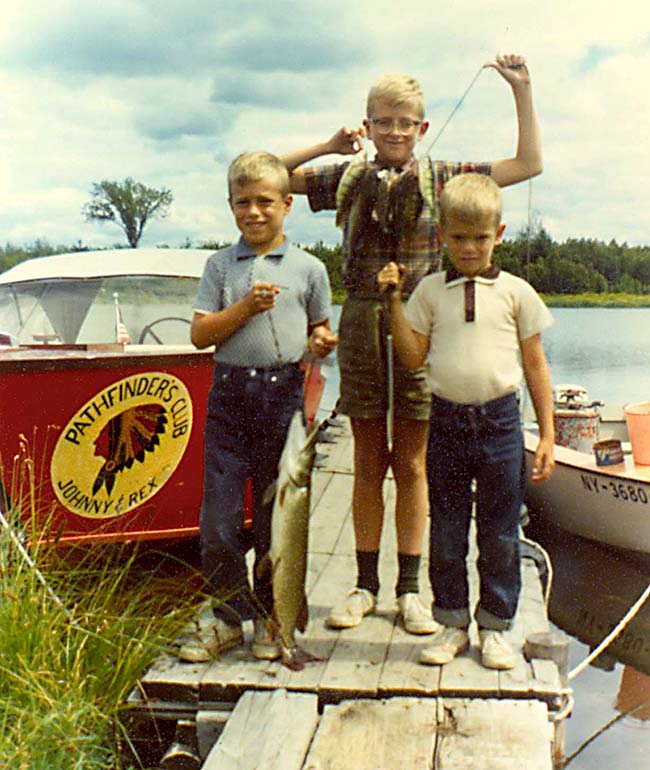 One of the main attractions of the place remained fishing. Johnny acted as fishing guide for all who wanted to go, and fish like perch, bass and the occasional pike were fairly plentiful if you knew the right spots, as Johnny did. Here’s my brothers and I after a day out fishing. My grandfather was creative and ambitious, and the boat in the back left was built by him in his garage in Dunellen one winter, and served us well for years. He was an artist too, and painted the emblem. The Pathfinder’s Club was the original name of the fishing group lead by he and Johnny, taking it’s name from James Fenimore Cooper’s The Last of the Mohicans, a favorite book of Rex’s. The trailer was named “Camp Ching-catch-gook,” another name from the Cooper book, and everyone who came there had to be given some kind of Indian name. Mine was Little Fox, for instance. (A kind of translation, as Klein means little in German, and Tod is an old Scottish word for fox.) 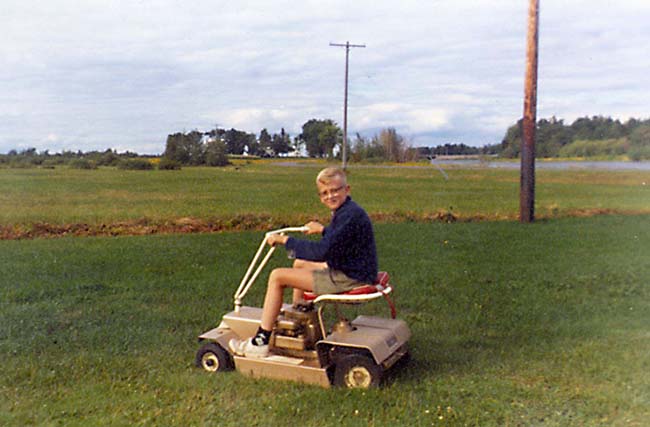 I was never as interested in the fishing as my brothers and father, but I did enjoy using the riding lawn mower when I was there, the first one we’d ever seen. I also went for long walks and looked for birds I could identify. Up at the corner was a small general store we could walk to for treats, and sometimes they had bundles of comic books with the logos stripped off and returned for credit. It was illegal to sell these remainders, but no one cared in this rural area, and some of my earliest Marvel comics were acquired this way. There was a drugstore in Waddington with new comics that I could get sometimes, but mostly I went to the Hepburn Library, a nice old building probably built with Carnegie money, and borrowed books to read. The women of the family were never as interested in fishing all day either, so some days we went to a small beach on the St. Lawrence near Waddington, where sand had been brought in. We had fun there, too. A half-mile walk there over a hill brought you to a close view of the large freighters travelling up and down the Seaway from the Atlantic to the Great Lakes. Further away was a lock you could visit to see the ships even closer as they passed through. 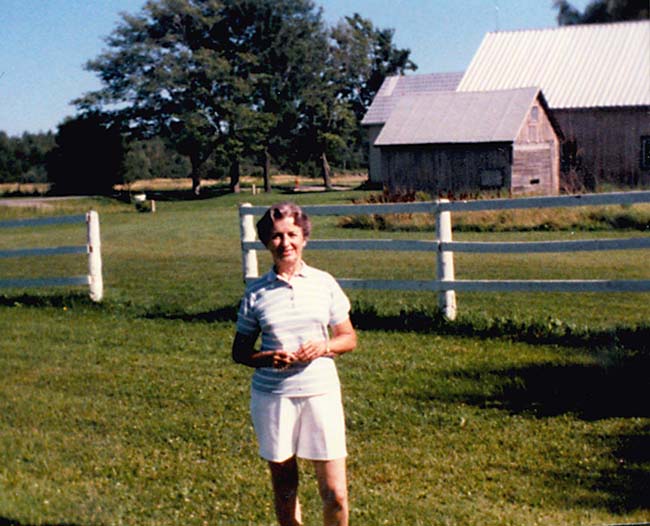 Sadly, my grandfather died too young in the 1960s, but the rest of the family continued to go to “The Trailer,” as we called it for many years. At some point, Johnny and Helen moved into the farmhouse next door, seen here behind my Mom, and some of their kids lived in the other trailer.

I stopped going up there regularly around 1966, I got my first summer job working with my Dad in the summer of 1967, and worked summers after that. I had high school friends I spent a lot of time with, too, and that seemed more appealing to me as a teenager. But every so often I would go up again and revisit the family at the trailer. Later, my Aunt Nancy and her family took over the property and put in a newer trailer, long overdue, and we had several fun family reunions there up until the mid-2000’s. By then my cousin Bev and her husband Bill were running the trailer, and living in Virginia. Bev loved visiting the camp, and made a lot of friends there, but when they decided to buy a winter home in Florida, having three homes was too much, and they reluctantly sold it.

We had a lot of great times at Camp Ching-gatch-gook, and we all remember it fondly. “The good old days!” as my brother Doug recently said. Family memories we all treasure.