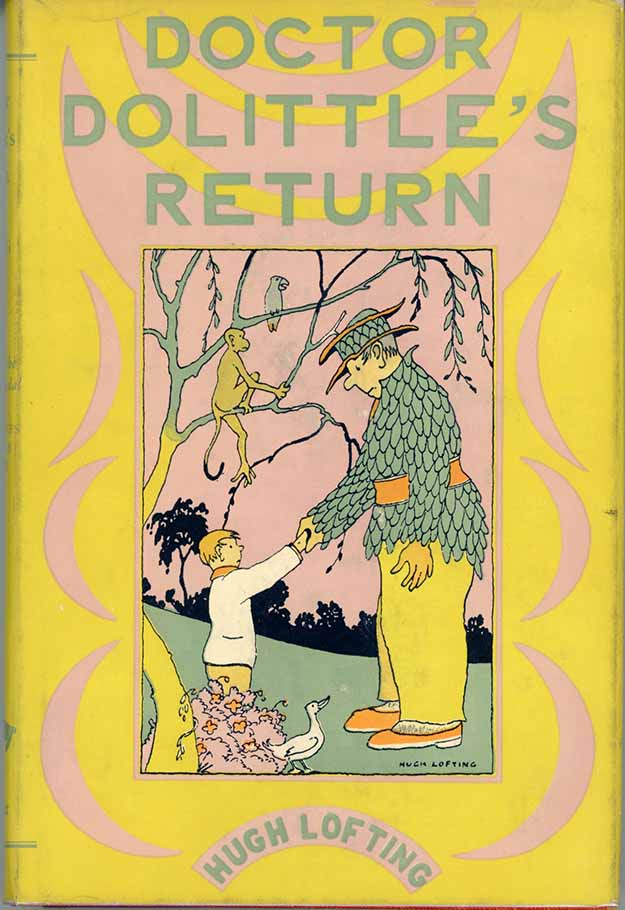 As i work my way through my collection of the Doctor Dolittle series, I found I hadn’t remembered much about this one. I may have only read it once before. Lofting had published a book in the series nearly every year from 1920 to 1928. “Doctor Dolittle in the Moon” of 1928 was meant to be the final book, but as often happens with popular series, Lofting resumed with this one in 1933 either due to popular demand, because he missed writing them, or perhaps financial or other reasons.

The doctor’s animal family in his home in Puddleby-on-the-Marsh miss him greatly, though Dolittle’s assistant Tommy Stubbins continues to keep everything running as best he can by doing some odd jobs to pay the bills. Everyone is waiting for the signal from the moon that the doctor is on his way back, and it finally comes during an eclipse when everyone is watching, a huge puff of white smoke. A few days later, a giant locust arrives with Dolittle on his back, along with his animal companions Chee-Chee the monkey and Polynesia the parrot. Everyone is shocked to see how large the doctor has grown due to the diet on the moon, even though Tommy Stubbins had grown there before he was sent back a year earlier. Dolittle is much bigger, far too big to fit into his own house! Once he has recovered his senses, he begins an exercise regimen that will reduce his size back to normal in a month or two. Another traveler has come with them, Itty the Moon Cat. She is mostly an ordinary cat who has agreed not to harm or frighten the rest of the animals living in and around the Dolittle home. The other animals fear and shun her despite the doctor’s insistence she be welcomed. Surprisingly, this is the first house cat ever to appear in the series. Lofting was clearly not a cat person.

Once the doctor has recovered, he is anxious to begin work on a book about his discoveries on the moon, but is soon swamped with animal patients who take all his time. A plan is hatched to get the doctor into a place where no one will bother him: jail. It turns out to be surprisingly difficult to achieve. Tommy Stubbins begins to take up the slack in the animal doctoring business. He has no medical training, but has been assisting Dolittle for some years, and the animals soon come to accept his treatments.

Many more interesting episodes and stories fill this volume, including the tale of Doctor Dolittle’s final months on the moon, and how he came to return. I’d place it near the top of my favorites now, perhaps third behind “The Voyages” and “Post Office.” Three more to go, but this one is certainly recommended.