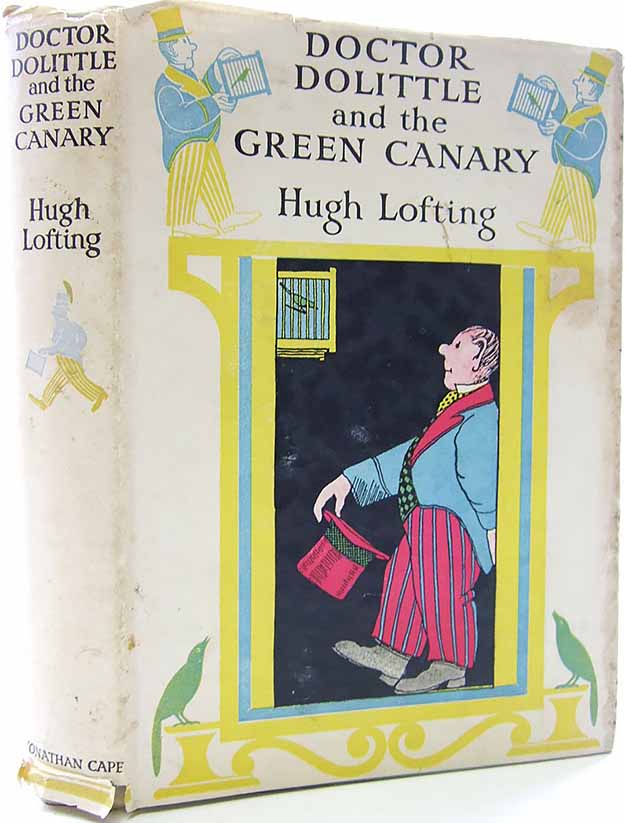 Image found online, my copy is a much newer paperback.

This is the last of the Dolittle novels, not quite finished at the time of Lofting’s death, completed by his sister-in-law Olga Michael. Despite that, it’s one of the best, in my opinion.

Pippinella, half canary and half greenfinch, was introduced in “Doctor Dolittle’s Caravan,” where the Doctor found and bought her in a pet shop, and was so astounded by her singing voice (despite the fact that it’s usually the male canaries who sing), that he made her the star of an all-bird opera. The book begins with Pippinella telling her life story, and an amazing one it is. She begins her adult life as a popular attraction at a coaching inn, then is purchased by a Marquis for his wife. The Marquis and his family are forced to flee from rioting workers from his mines. She is then taken by soldiers, and becomes the mascot of the troop, and later stolen again to become a “canary in a coal mine,” present to let the miners know if there is any dangerous coal gas around. And that’s only the beginning.

Pippinella’s favorite owner was a window-cleaner who was actually a writer living in a lonely windmill. When she has told her life story to the Doctor and his animal family, he agrees to try to track down that man, and the second half of the book is a cracking good detective story in which several of Dolittle’s animal friends get starring roles of their own.

One more Dolittle book to reread, the Doctor’s “Puddleby Adventures,” a short story collection, and I could also reread “Gub-Gub’s Book,” in which Dolittle’s pig takes center stage, but it’s largely about vegetables, as I recall. There’s one other non-Dolittle Lofting novel for children I plan to reread, “The Twilight of Magic.”

This one is definitely recommended.