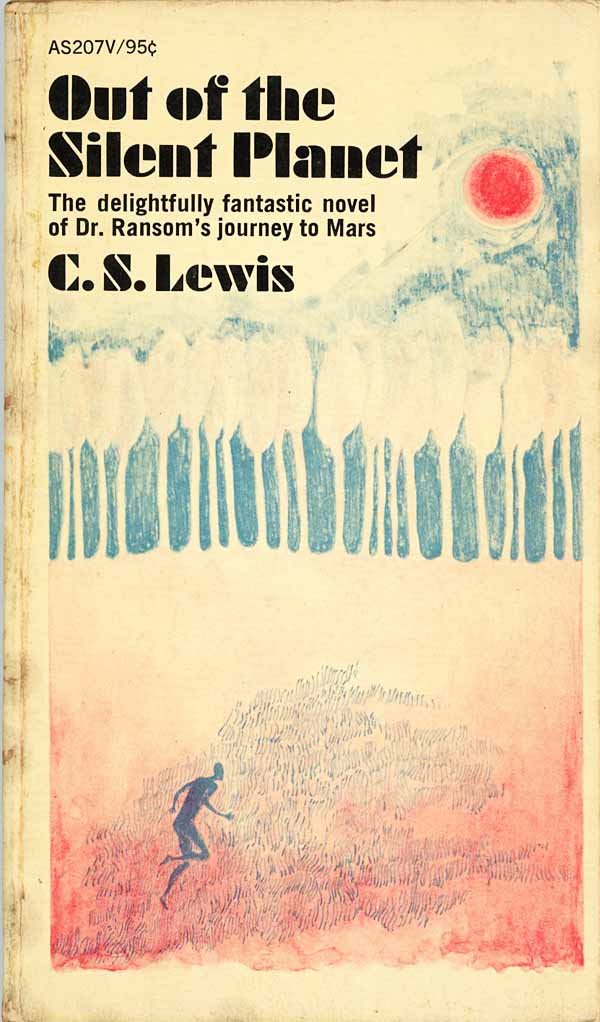 While I love Lewis’ “Narnia” series and have read them many times, his “Space Trilogy,” of which this is the first, is something I’ve only read once or twice, and not for decades. While meant to appeal to science fiction fans, they are actually allegorical fantasy. I don’t mind that, and never expected them to be scientifically accurate. This is a journey to Mars, but one that owes more to Jules Verne than Robert Heinlein. Of course, when it was written in 1938, much less was known about space travel and Mars, and seen from that time, Lewis’ book at least makes an attempt to adhere to then-current knowledge, but the important things are the characters and ideas. In that way, it is science fiction.

Doctor Ransom, a Cambridge professor, is out alone on a walking tour through the British countryside when he stumbles into secret experiments being done by two scientists, one a person he went to school with. Unknown to Ransom, Weston and Devine are planning a return trip to Mars (they’ve already been there once) and need another person to offer to the creatures they found there as a sort of hostage or possibly even food, they’re not sure. Ransom is drugged and kidnapped, awaking aboard the spacecraft already on the way to Mars.

When they arrive, Ransom first sees the fearsome creatures he is meant to be given to, and manages to escape on foot through an odd and unknown landscape. Eventually he is found by another sentient local creature, a hrossa: water-loving, friendly, primitive in some ways, wise in others. Ransom is brought by his new friend Hnohra to the hrossa village, and being a language specialist, Ransoe is able to learn theirs and begins to gradually understand their life and world. It’s very different from our own, especially in one particular way. The inhabitants of Malacandra (their word for Mars) are of three distinct species, but all follow the will and wisdom of a sort of immortal called Oyarsa. Eventually Ransom is sent to Oyarsa, not before one of his hrossa friends is shot and killed by the two humans who brought him to this world and are still pursuing him.

When Ransom finally reaches Oyarsa, he learns much more about Malacandra and its place in the solar system, where each planet is overseen by an immortal like Oyarsa…except for Earth. Our world is called “The Silent Planet,” because its connection to the heavenly family has been severed by an immortal who has turned evil.

There’s lots more to discover and enjoy in this book. The flora, fauna and physical world of Malacandra is inventive and fascinating, but the characters and ideas are even more interesting, at least to me.