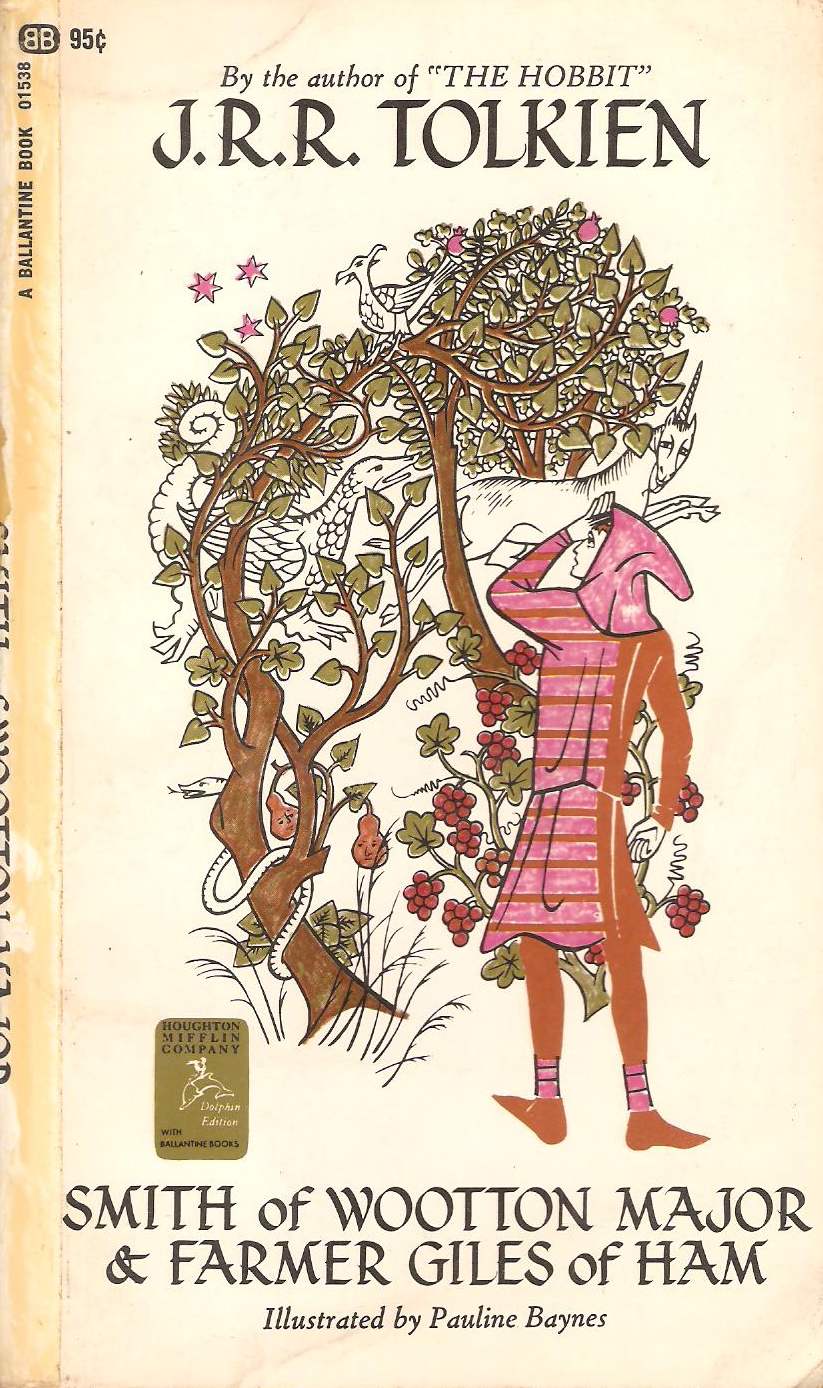 I bought this paperback collecting two short stories by Tolkien wonderfully illustrated by Pauline Baynes in 1973, when it was already on an eighth printing. Both had been issued separately as hardcovers.

“Farmer Giles” was written in 1937 when Tolkien was 45, after he’d already completed “The Hobbit,” which was published that year, though “Farmer Giles” was not published until 1949. It has no direct connection to Tolkien’s other works, though it certainly draws on the English history, people and countryside he knew well, and also the mediaeval works of literature he studied and taught. Farmer Giles is a simple country man, a farmer of modest means who, almost by accident, repels a giant who wandered down to his farm from northern mountains. Giles has a dog, who warns him of the giant’s approach, and he goes out with his only weapon, a very primitive gun, to try to scare off the threat to his crops and livestock. The gun goes off and happens to hit the giant, who takes it as a vicious insect bite, but that’s enough to turn him back toward home.

Word of this spreads, until even the king of the area of England that Ham is part of hears of it, and he sends Giles an old but beautiful sword from his armory as a thank you gift. A few years later, a large and fiercesome dragon comes to the area, after hearing the giant’s tales of how food-rich and peaceful it is. Farmer Giles soon finds himself being promoted as the person to repel the dragon, a task he does not want. I will leave the rest to you to read.

“Smith of Wootton Major” was written much later, and published in 1967, after Tolkien’s fame was massive and his place in literature well established. It’s a very different kind of story, wise and insightful, but somewhat melancholy, definitely the work of an older man.

In another small English village, a Great Cake is baked every 24 years by the town’s Master Cook. The one baked as the story opens has a special prize in it, a magical star from the kingdom of Faery. A boy named Smith, whose father was the village smith, as he would be, accidentally eats the magic star, and later wears it on his forehead, where it is mostly invisible to others, but somehow imbues the boy with magic charm. Later, Smith finds it can bring him into the land of Faery, and when he has time away from his job, he travels widely in that mysterious and magical country. Eventually he learns many things about himself and the origin of the star.

Both these stories are charming, the many illustrations are excellent, adding a great deal to the reading experience, and though this is minor work compared to the author’s major opus, “The Lord of the Rings,” it’s still well worth reading.

One thought on “Rereading: SMITH OF WOOTTON MAJOR & FARMER GILES OF HAM by J.R.R. Tolkien”