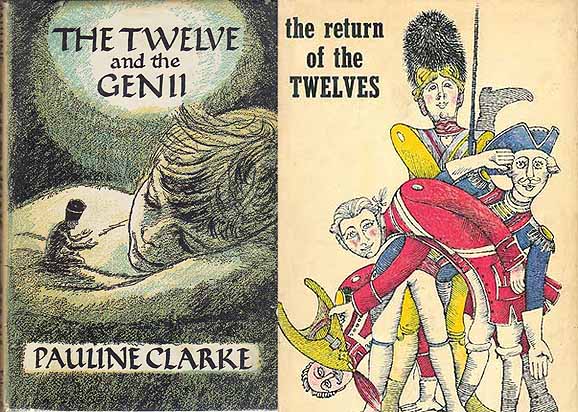 This excellent book had different titles in the UK (left) and the US (right). By either title it’s a gem.

Max and his family have moved to a new home, but an old house in rural northern England not far from Leeds. Max discovers a hidden treasure in the attic, a set of twelve wooden soldiers, clearly very old, worn, and much loved. To his great surprise, as he plays with them, they begin to come to life. Each has a name, rank, history and distinct personality, and they treat him as a sort of god, or genii, as they call him. Max learns they once belonged to four other genii, he guesses children like him, who created elaborate stories and adventures for them. Somehow that creative energy brought the wooden soldiers to life.

Max’s sister Jane discovers the secret by spying, but soon joins in the game. Max’s older brother Philip is more interested in the possible value of the toys, especially when he hears that a wealthy American is offering a large reward for any set of similar toy soldiers found in the area. The American is looking for the soldiers once owned by the Brontë family in nearby Haworth. The four Brontë children; Branwell, Charlotte, Emily and Ann, wrote extensive stories about “The Young Men,” as they called them, a prelude to the literary fame and careers of the three Brontë sisters. Philip, Max’s older brother writes to the American to say they have such a set of soldiers, and Max is furious when he finds out. He explains the danger to the Twelves, and they decide on their own they must make a dangerous journey to their old home, the Haworth parsonage, now the Brontë Museum, where they will be cherished and protected from being taken overseas.

Not even Max is witness to their escape from the attic and the beginning of their journey, but he and Jane soon figure out what is happening, and help the soldiers along when they can. Still, the Twelves must face many perils in the oversized human world, from automobiles that want to squash them to people who have heard of the reward and want to capture them and collect it themselves.

This is a great story full of imagination and literary relevance. When I read it in my own childhood, it led me to fine books like Charlotte’s “Jane Eyre,” and Emily’s “Wuthering Heights,” as well as biographies of the talented but tragedy-prone family. It won Britain’s Carnegie Medal in 1963. I recommend it highly.