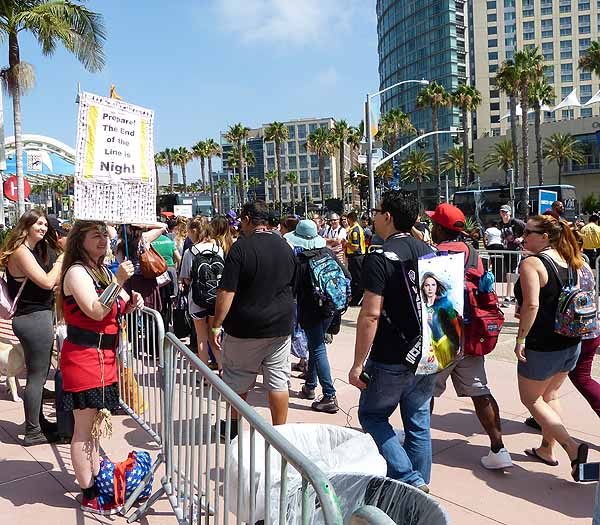 As I made my way from my hotel to the con center this morning, I had to wait for some of the long line of folks to enter Hall H, the one many of them had been waiting to get into for days. I was amused by this lady with the sign who was “preaching” to the line as they entered, things like “Your long wait is almost over, enlightenment is just ahead!” Her group is the Line Monks. Quite a clever and funny idea to keep spirits up. 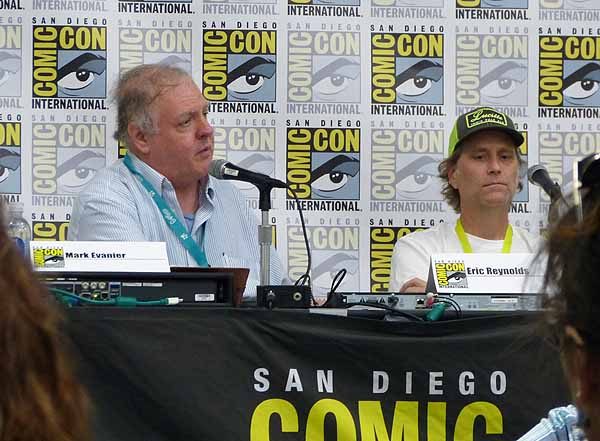 I spent a lot of time in panels Friday, beginning with one remembering Walt Kelly’s daughter Carolyn, who died recently, led by her companion and friend Mark Evanier, shown here with the publisher of the series of complete Pogo strips compiled, designed and edited by Carolyn, Eric Reynolds of Fantagraphics.

Also there were Maggie Thompson, John Plunkett (I think) and Scott Shaw, all friends of Carolyn. I met her once, she was smart and charming, and a great champion and preserver of her father’s wonderful work. 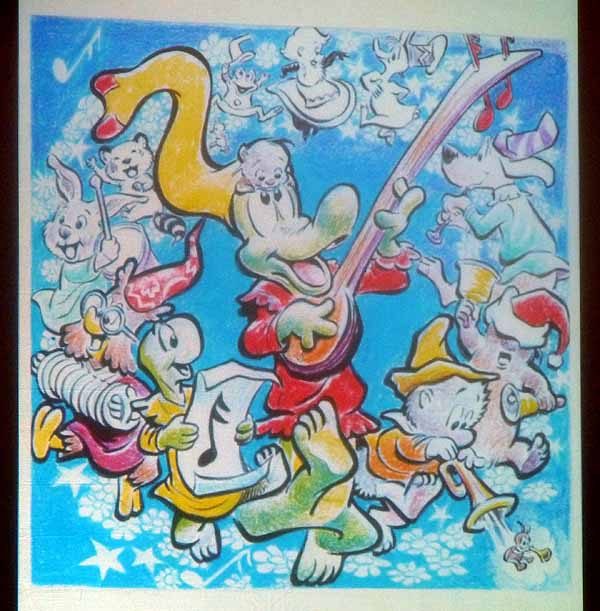 Among the things I learned is that Carolyn preserved many boxes of Walt Kelly art and records that Mark is still going through, some of which will appear in the Pogo books, other things Mark hopes to put in book form eventually. Here’s a color layout for a painting they found… 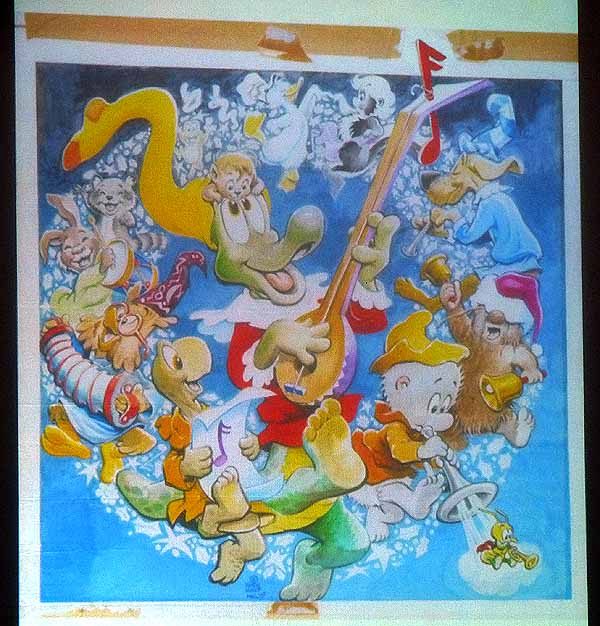 …and the finished painting, screen shots from a projector, so not ideal, but still terrific. Much more unseen Kelly work should be forthcoming. 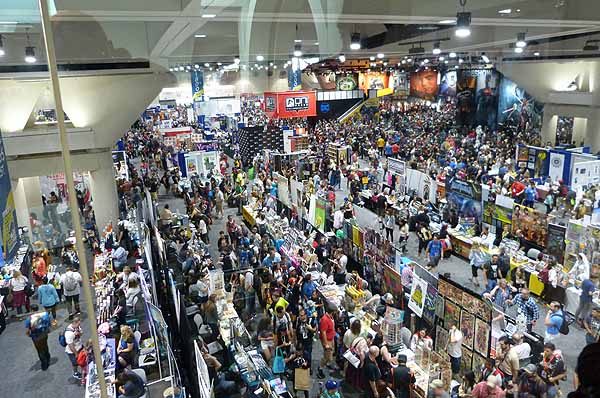 About 10 percent of the Exhibition Hall from the only place you can get at least a partial overview, windows at the back on the second level up. 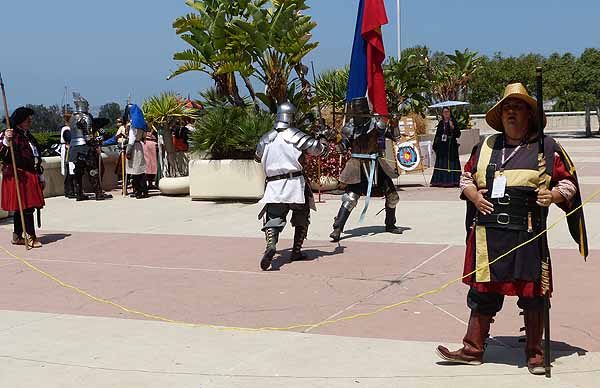 Outside in the back of the con center, taking a break between panels, I always enjoy seeing this group of Medievalists doing sword fights. 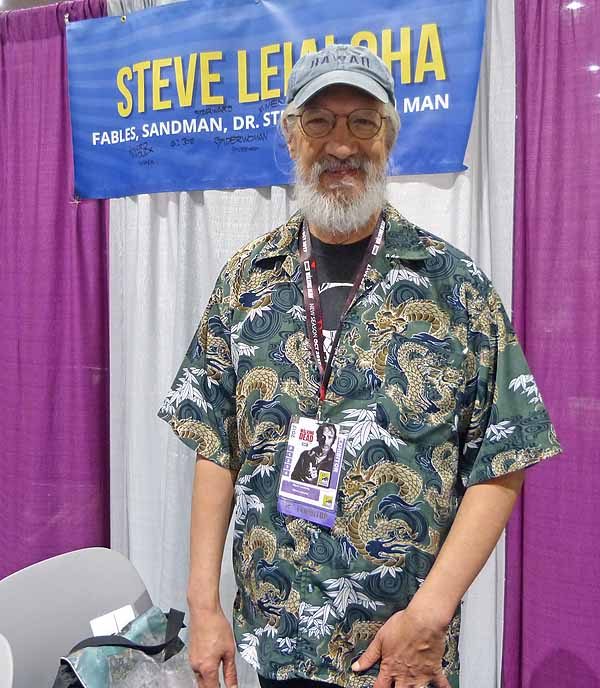 Friend and long-time workmate Steve Leialoha at his table. I miss working with him on FABLES. 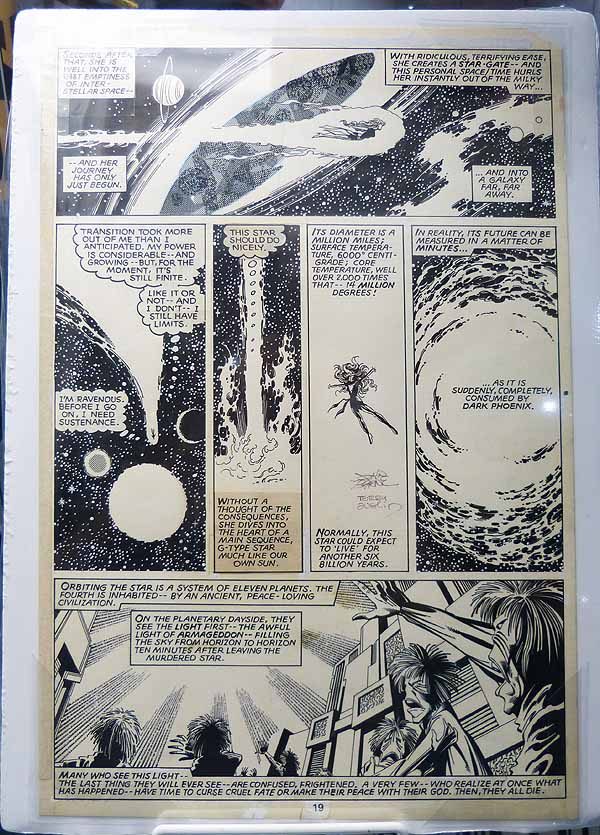 A remarkable piece of original art at the Heritage Auctions booth, a page from X-Men #135 by John Byrne and Terry Austin, letters by Tom Orzechowski. It’s the incident that led to the death of the character Phoenix, so a pivotal moment in the series. Remarkable because it’s not that old, yet the auction estimate is $20,000! 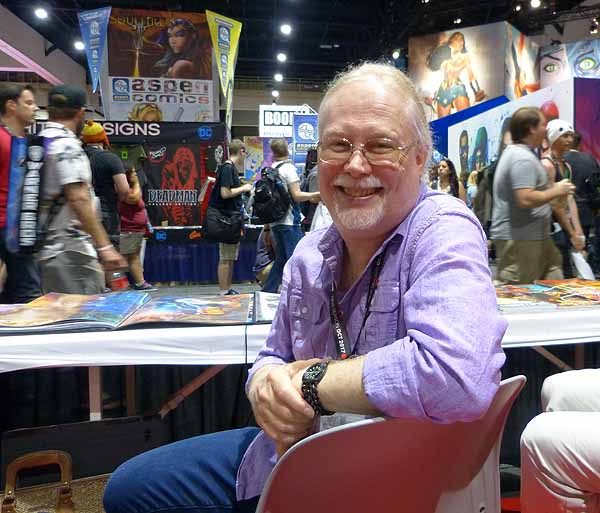 Mark Wheatley at his booth near the DC booth, I always enjoy talking to him. Mark is recovering from an auto accident that keeps him from drawing right now, but is healing well. 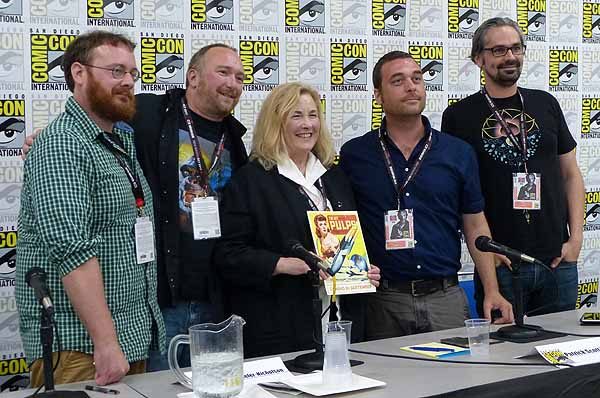 Here’s the panelists from “It Came From The Pulps!” a panel about the many connections between pulp magazines and the earliest comics. I only know one of the speakers, Nicky Wheeler-Nicholson, granddaughter of Major Malcolm Wheeler-Nicholson, the founder of the company that became DC Comics, but all these scholars had interesting things to say. 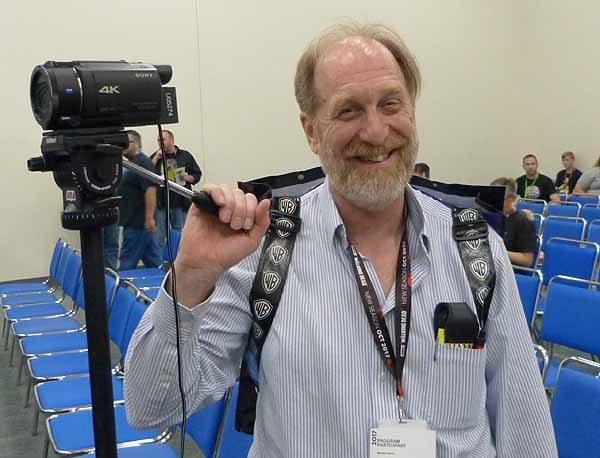 Filming this panel, as he has for many years and many panels at the con is Mike Catron, who I worked with at DC long ago. He’s now at Fantagraphics. This is his first digital movie camera. We talked about his hope to get his large video archive preserved at some point. 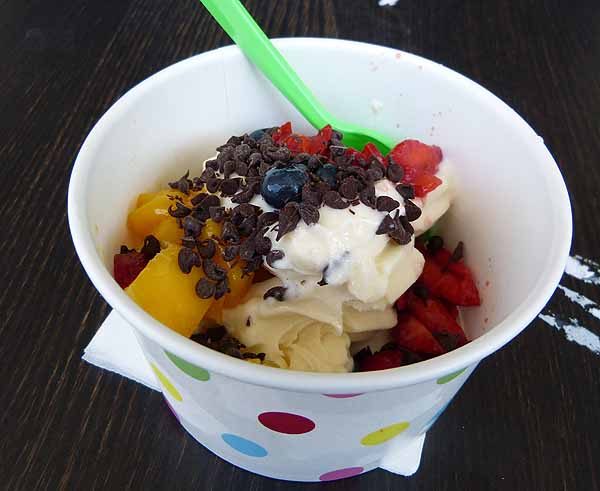 A quick personal note, every afternoon I’ve been making a lunch of frozen yogurt, fresh fruit and chocolate bits from the Sweet Things shop in the street level of my hotel. It’s sold by weight, you make your own mix. Highly recommended, and a good source of calcium. 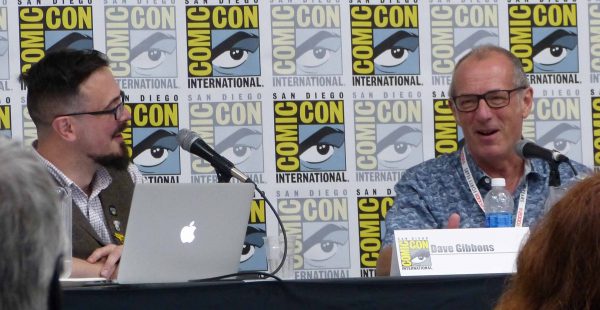 Back at the con, I attended Dave Gibbon’s solo panel. I’ve known Dave for decades, and he’s so smart and funny, I always enjoy listening to him. One anecdote I hadn’t heard: Dave was assigned a “Dan Dare” series at British magazine 2000AD early in his career. Dare had been created by writer/artist Frank Hampson, who was not treated well financially or creatively. After starting the strip, Dave met Hampson at a party, and apologized for taking the strip and perhaps taking work away from Hampson. Hampson replied, “Never mind, we all have to make a living, son.” Dave was later able to bring that same attitude to DC artists who were assigned new WATCHMEN series, a life lesson he was able to pass on. 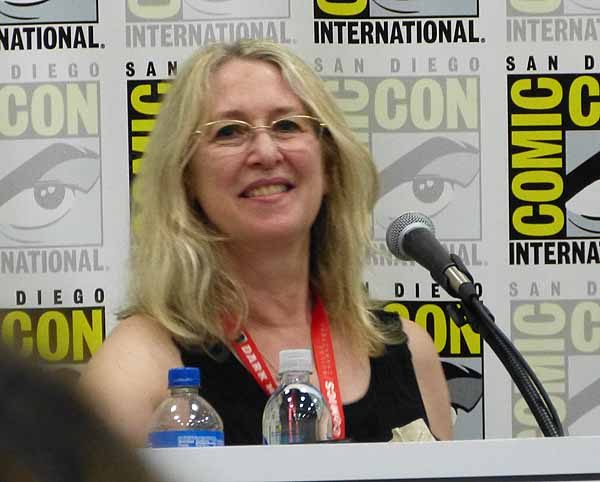 I next attended Karen Berger’s panel introducing her new line from Dark Horse, Berger Books. It was great to see and hear Karen once more in and enjoying making comics. Her line will begin with four projects that all sound interesting. 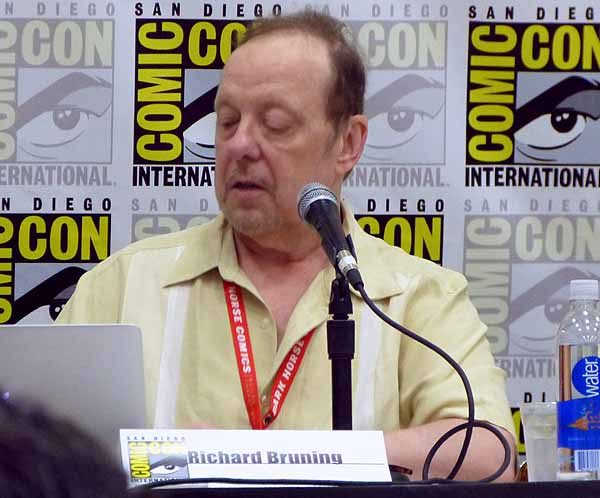 Art directing is her husband, Richard Bruning. I worked with both of them for many years at DC. 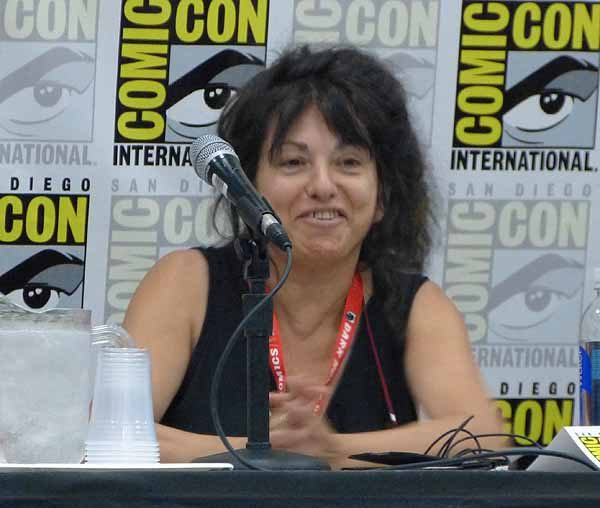 One of the projects is written by Ann Nocenti, above, with art by David Aja. Another is a new version of Dave Gibbons’ THE ORIGINALS, so he was there, too. I wish Karen and her line all the best, and expect they will do well. 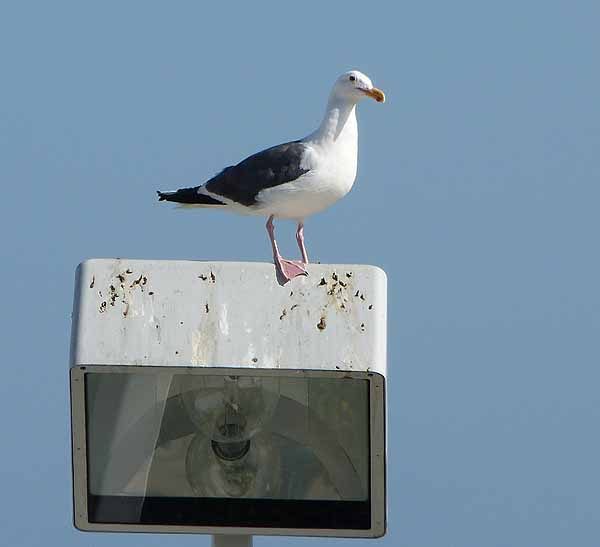 Another brief break for fresh air in the back of the con center, where I saw an actual live wild bird. I think this is a Western Gull, but it might be a California Gull. I don’t have time to check. Anyway, nice to see something around other than people.

My final panel of the day is one I was on, for DC’s Young Animal line, for which I’m lettering DOOM PATROL. It was moderated by editor Jamie S. Rich, and led by Young Animal creator and writer Gerard Way. Other writers, artists, colorists and letterers where there, too, all much younger than me. I’m the Old Animal. Had fun, though. The audience seemed to enjoy it. 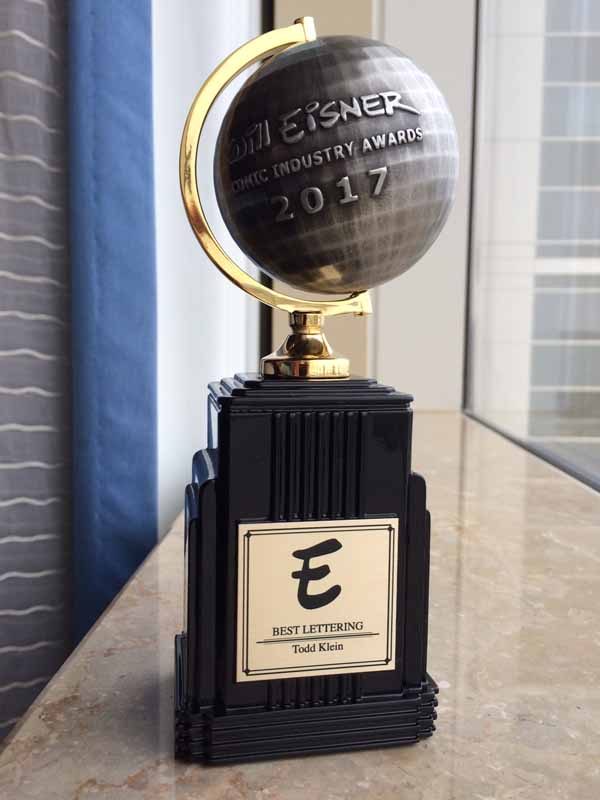 In the evening I attended the Eisner Awards and received my 17th one of these. I am pleased, honored, and as usual surprised. Aren’t voters tired of me winning? Apparently not! Thanks to those of you who voted.

I didn’t take any pictures at the awards, I was too far from the podium, but you can find it all online, I’m sure, including me. Fortunately, I was the first winner, so I got that over with quickly and was able to relax and enjoy the rest. Congratulations to all the winners, including many folks I know and work with. Afterwards I had fun talking to folks before heading back to my room on this late evening out for me. Now I’m running behind, have to get back to the con for more adventures!