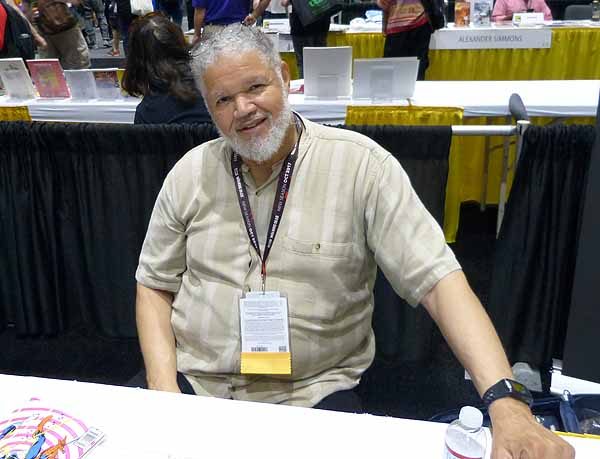 Another full day at the con, and I was able to spend more time in the Exhibit Hall today. Above is Keith Pollard, a busy comics artist in the 1970s-1990s. I probably lettered some of his DC work for things like GREEN LANTERN, and I know some of the “Tales of the Green Lantern Corps” stories I wrote were in issues where he drew the main story, but we’d never met. I applaud the San Diego staff for finding and inviting guests like this that are long out of the current comics business, but of interest to older fans and an important part of comics history. I think this is the only con that makes this kind of effort. 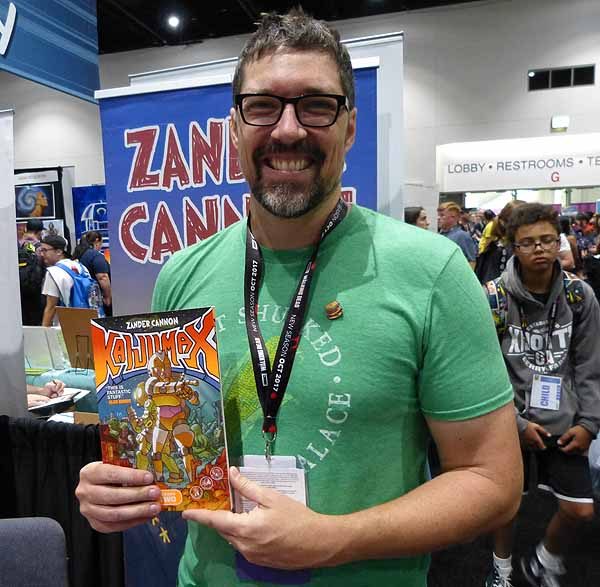 Saw other friends in Artists’ Alley like Zander Cannon, here with his fine new creator-owned series, KAIJUMAX about a sort of super-prison for giant monsters I think, though I haven’t read it yet. Love the covers and art and Zander’s lettering, though. 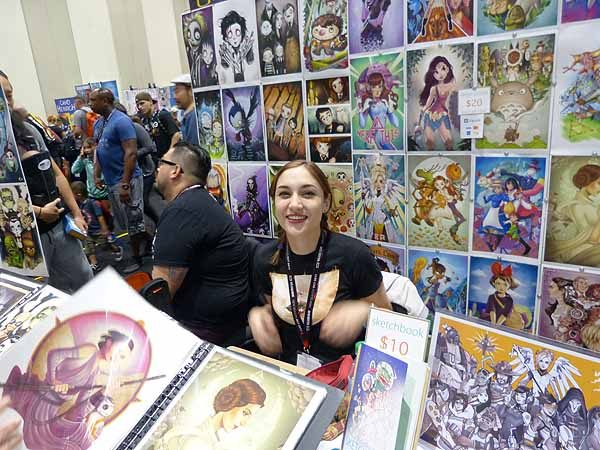 Artist Chrissie Zullo with some of her many great prints, and with ghost hands, as my camera caught them in motion. I love her work, full of charm. 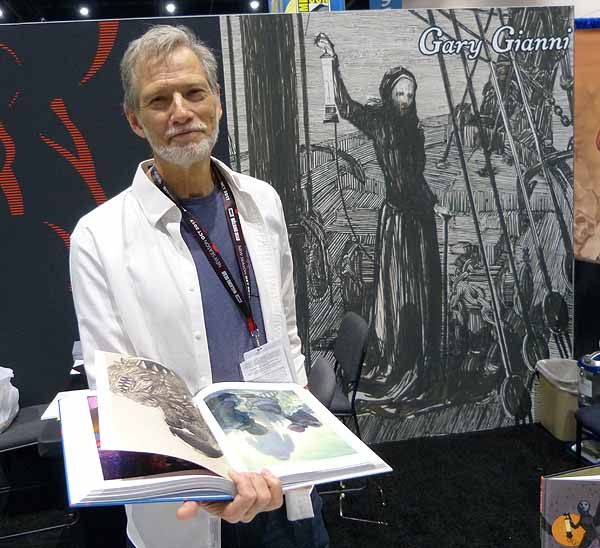 I always enjoy talking to artist (and sometimes writer) Gary Gianni, here signing a page he did in an art book for a fan. Gary is shopping around a children’s picture book proposal that I hope will find a good home. He still has some of his “Prince Valiant” newspaper strips for sale at the show, too. 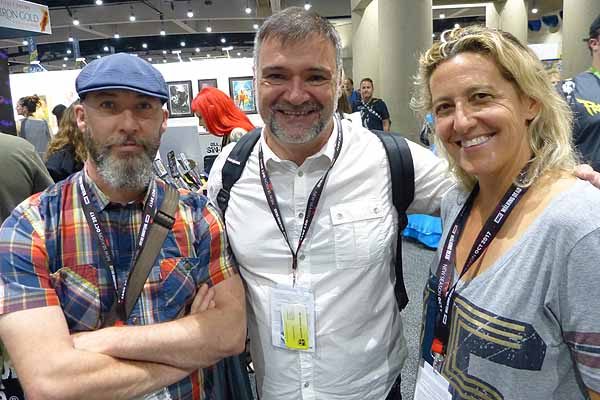 Here’s colorist and painter Jose Villarrubia with friends, he’s wandering the con like me, so I’m glad we met. Jose is always busy and in demand. Just before this I attended my first panel of the day, a favorite, “Quick Draw,” hosted by Mark Evanier, where speedy and funny cartoonists Sergio Aragones and Scott Shaw, and at least one other guest artist, this year Maria Scrivan, draw Mark’s funny ideas, audience requests, and try to stump a guest guessing what they’re drawing, this year actor Phil LaMarr. The program always makes me laugh a lot, as it it did this year. 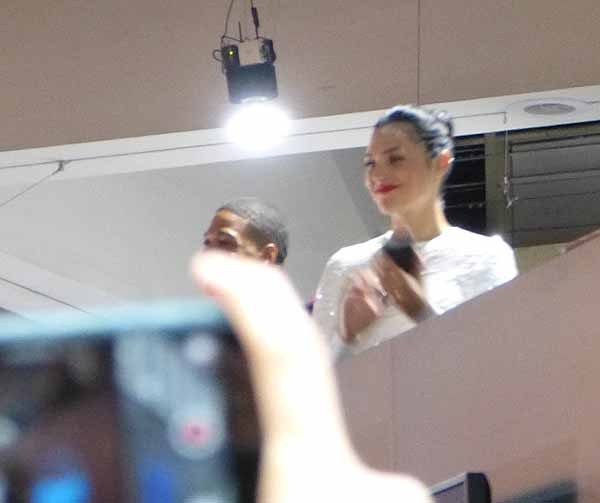 Not long after seeing Jose, I was trying to pass the DC booth, and got jammed into a crowd that was cheering and holding up their phones to take pictures. Looking up to the balcony, I found the reason, stars of the upcoming film “Justice League” were making an appearance. I only know one of them, Gal Gadot, above, who I loved as Wonder Woman in the recent film. I was pretty far away, but even then she was dazzling in a sparkling white dress, and obviously enjoying the fan reaction. 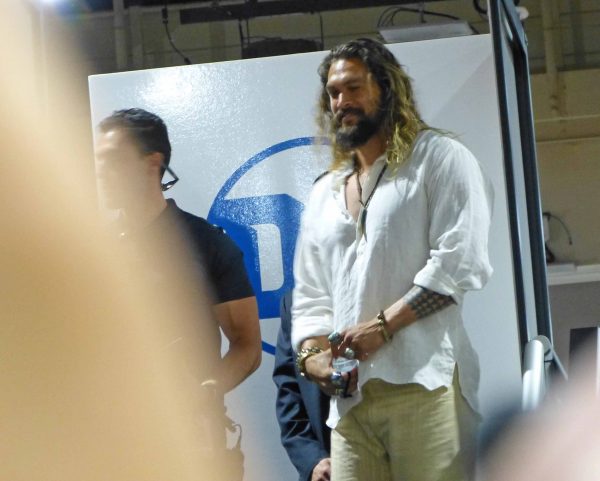 I believe this is Jason Momoa, who plays Aquaman in the film. These were the only stars I was able to see. Kind of cool, but the crowd was a bit overwhelming, and I got out of it when I could. 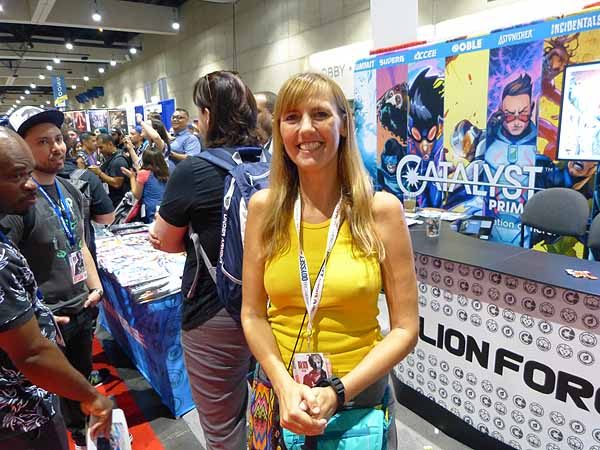 At the Lion Forge booth I talked to editor Joe Illidge, far left here. I’m lettering a book for him at the company that will debut in November, KINO. I also met and enjoyed talking to letterer Saida Temofonte, who had been at the other end of the Young Animals panel I was on, but I didn’t have a chance to meet her. Saida’s from Rome, Italy, now living in Los Angeles. She’s been lettering comics for at least ten years, and it was nice to meet her. 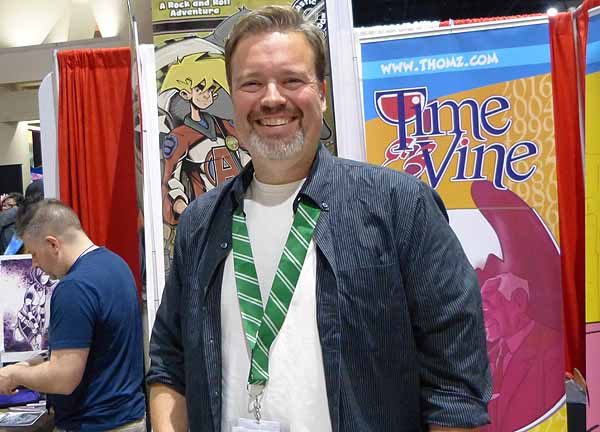 Saw old friend Thom Zahler at his booth, as I often do. Thom’s new series TIME & VINE is doing well, he told me, and he has a new web comic, too. 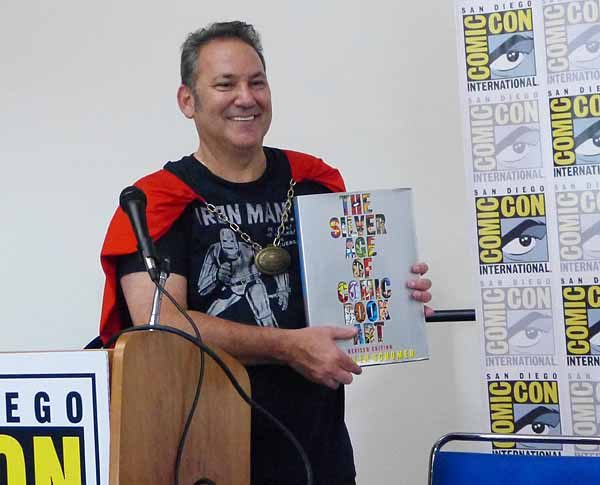 At 2 PM I attended Arlen Schumers “Visualecture” celebrating Jack Kirby’s 100th birthday. I enjoyed it, though Arlen couldn’t get the whole thing into the time allowed. I expect he will do it at other cons, and probably put it online as well. 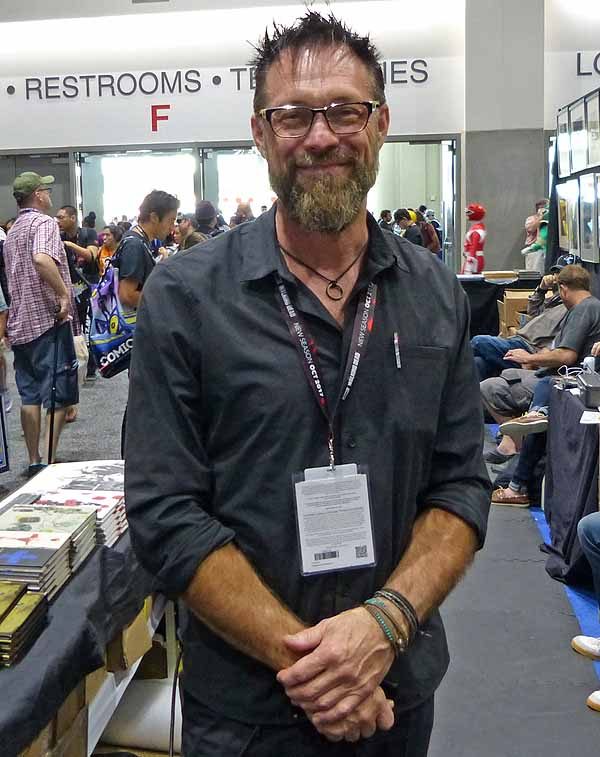 Back in the Exhibit Hall I chatted with artist Kent Williams, who is still unhappy we haven’t been able to work together more, always a nice thing to hear. Henrik Andreasen was there too, getting a sketch or signature from Kent. 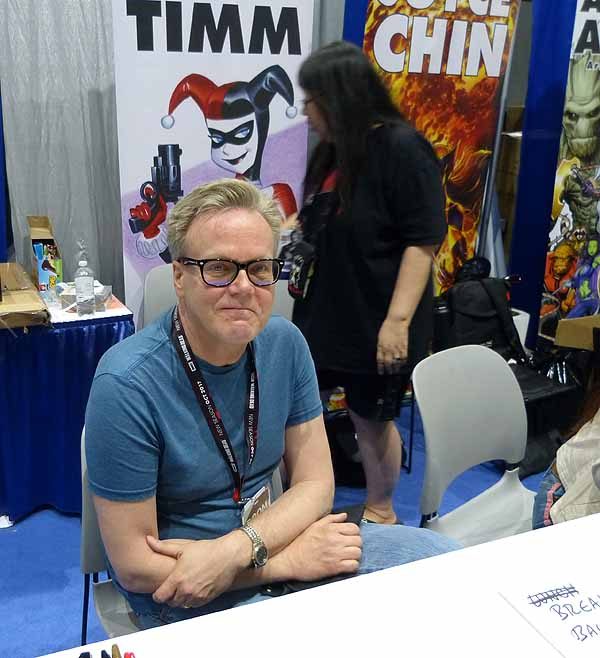 I spoke briefly to Bruce Timm, whose art I recently worked with for the cover of the con’s Souvenir Program Book. Bruce’s versions of the DC characters in animation form are the best. 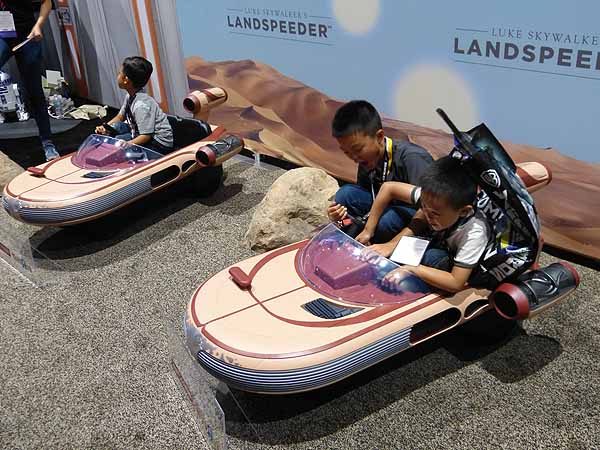 This is a fun idea for kids, small electric-powered versions of Luke Skywalker’s Landspeeder from “Star Wars.” These are stationary samples that kids were enjoying. Probably very expensive, but I would have loved one as a kid myself.

Late afternoon I attended “That 70s Panel,” again hosted by Mark Evanier, to listen to many creators who got into the business in that decade, including Keith Pollard, Marv Wolfman, Joe Staton and Ron Wilson. As Mark explained, decades ago he always hosted a “Golden Age” panel for creators who began in the first years of comics. As those folks passed, he moved on to “Silver Age” creators who began in the 1950s and 1960s. Now there aren’t many of those at the show either, and he’s drawing from the 1970s.

Also there were Elliott S. Maggin, Mike Grell and Paul Levitz. Many great stories were told. If you’re interested in comics history, Mark’s panels like this one are the best, and as I worked with many of these folks, it’s also somewhat nostalgic for me. Paul was particularly interesting talking about the DC Implosion of 1978, and how difficult it was for him to have to tell creators DC no longer had any work for them. I was a survivor of that company cut-back. 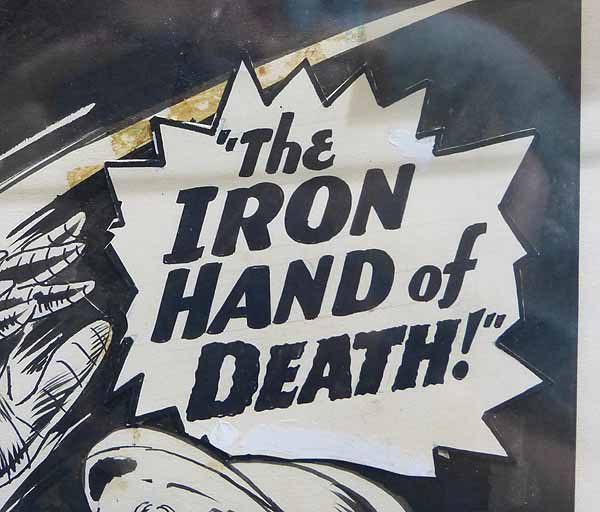 Back on the con floor at the Heritage Auctions booth, it was a treat to get a close look at some original Ira Schnapp cover lettering on a 1960s OUR ARMY AT WAR cover drawn by Joe Kubert. If you look closely, you can even see some of his pencil guidelines and layout. Here’s evidence that Ira thought a serif letter I worked fine in this situation, where I would not use it! 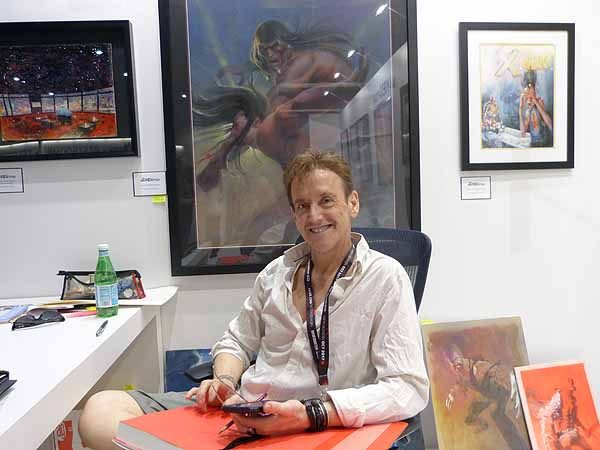 I had a good chat with artist Bill Sienkiewicz at his handsome booth which displays some of his great paintings. Bill told me he was enjoying having them up on the wall where he could look at them, something he doesn’t have room for at home. 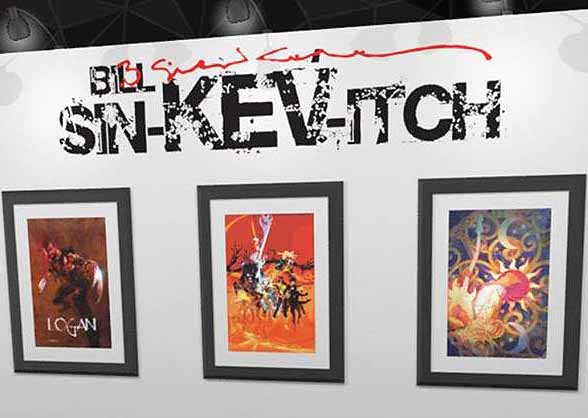 I also like the phonetic title of the booth. Bill said he was happy to have finally found a way to avoid having to tell everyone he talked to how to pronounce his name! I know I always took it as a matter of pride that I learned to spell it correctly from memory whenever we worked together. 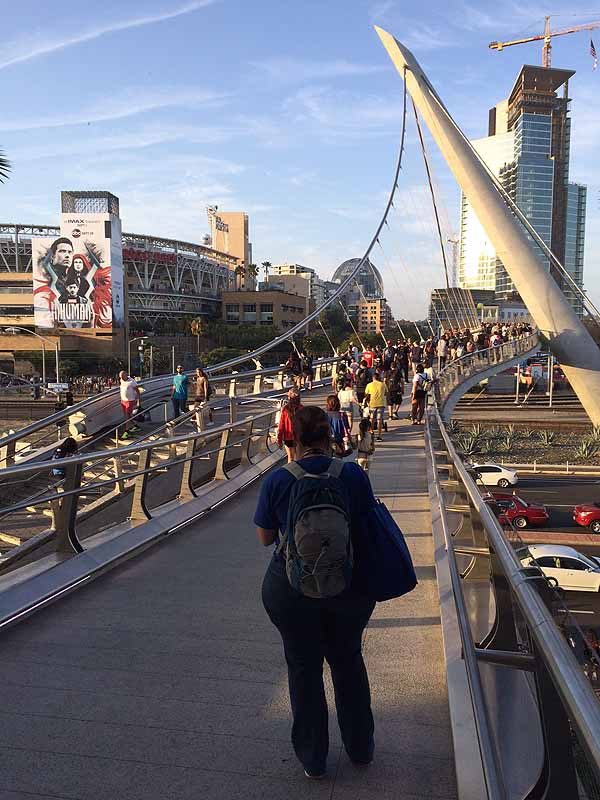 As the Exhibit Hall closed for the day, I headed back to my hotel. I still had some energy, and as I had no dinner plans, I later walked over the pedestrian bridge to the north side of the main road and rail lines, then a bit west to the Gaslamp District to find somewhere to eat, which turned out to be Taka Sushi. As always, the area was mobbed with con-goers and other tourists, and it was fun to enjoy that atmosphere for a while before heading back to my room for an early night. One more con report to come.