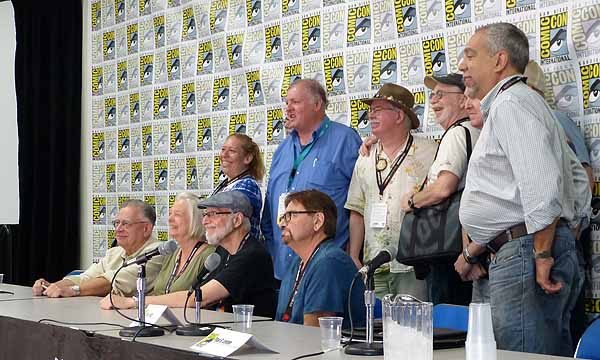 The first thing I did at the con today was attend the annual Jack Kirby Tribute panel. Lots of Kirby panels this year, but this one is a fixture. Here are just some of the pros and friends who turned up to tell stories about Jack and comment on his work. I can’t name them all, but seated are Mike Royer, Louise Simonson, Marv Wolfman. Standing are Bill Finger’s granddaughter, Mark Evanier, Brent Anderson, Walt Simonson, Jim Chadwick (mostly hidden). The most memorable comment for me was something Kirby said when told that some artists who loved his work were going to bring back some of his characters. Jack said, effectively, “They got it wrong. If they want to be like me, they should come up with new stuff.” 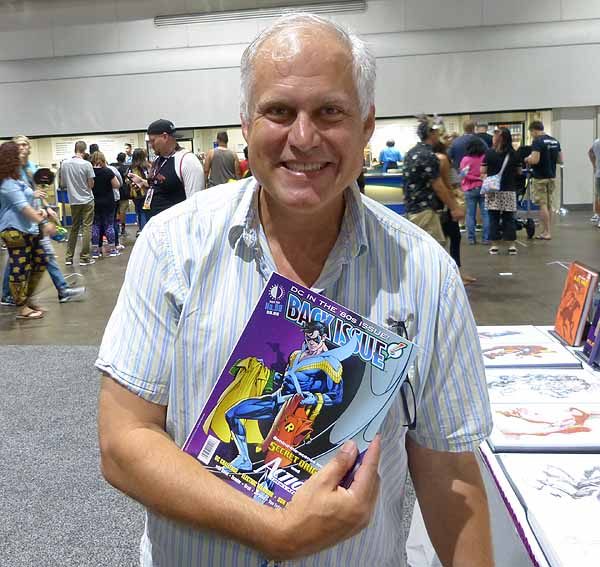 In the Exhibit Hall I ran into Ed Catto. I wrote a little bit about the logo for the DC series THRILLER for an article he did in this issue of BACK ISSUE magazine from TwoMorrows. It’s always good to get more information about logos and lettering out there. 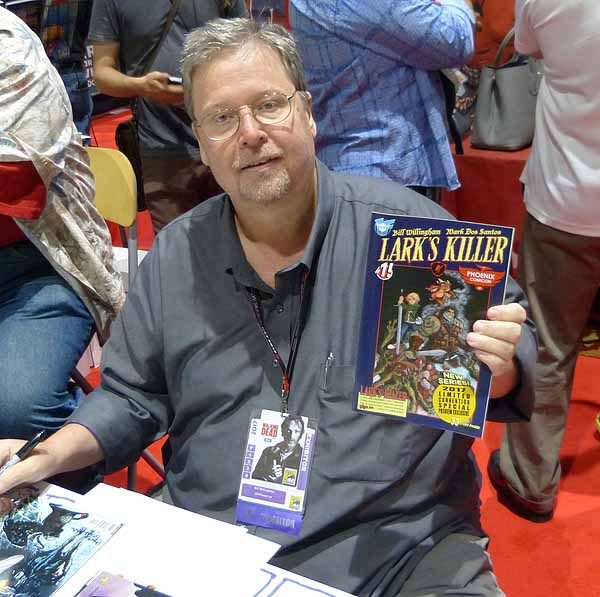 Bill Willingham was at the show promoting and signing a preview of his new series from First Comics, LARK’S KILLER. It was good to see him. He also showed me some notes he was making about the series, and gave me a copy of the preview, which will probably show up on my blog when I’ve read it. 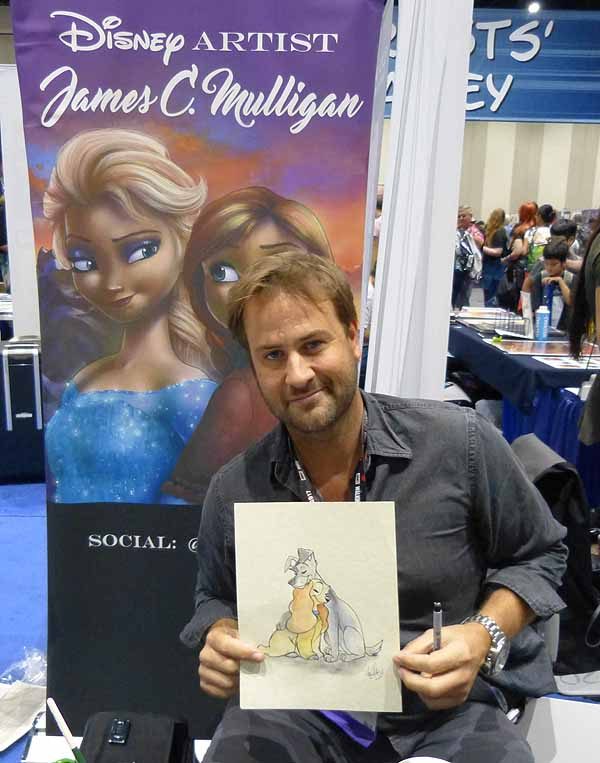 Here’s a Disney artist I know nothing about, but I loved the sketches he was doing of classic Disney animated characters, really charming. 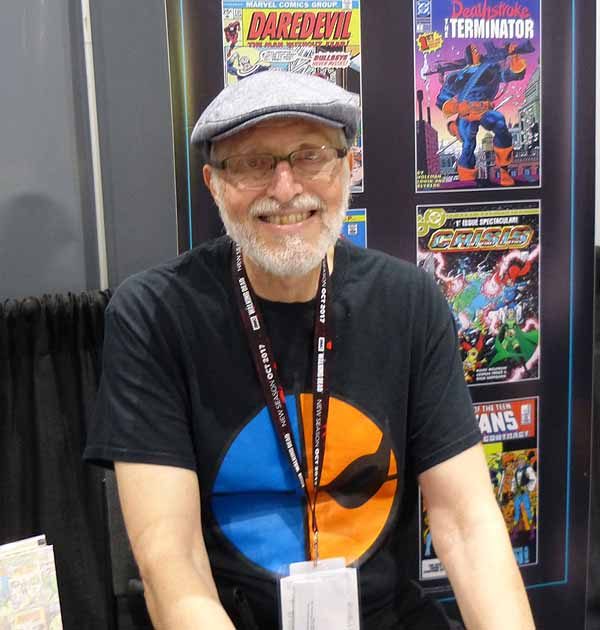 I caught up with Marv Wolfman at his table, and he’s very happy to be writing new comics about the Teen Titans character Raven that he co-created with George Perez.

Another panel Mark Evanier does every year is “Cover Story,” where five cover artists talk about five of their covers, and working on covers in general. This year the artists were Mike Grell (not shown), Erica Henderson, Arthur Adams, Joyce Chen and Joe Staton. The covers were picked at random by someone else, and the comments ranged from, “I love that cover!” and why to “I hate that cover!” and why, with other intermediate reactions. Lots of fun. One of Arthur’s covers was from TOM STRONG’S TERRIFIC TALES which I did type and logo design on, and I was called on by Mark to identify a few logos. I also spent some time in the “Pro/Fan Trivia Match” for fun, and I have to say, the questions were way too hard! 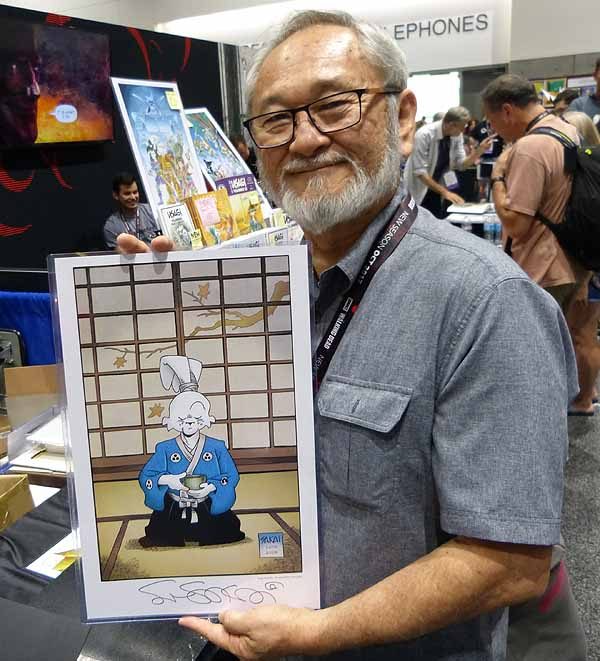 I talked to Stan Sakai, here with a recent print of his character Usagi Yojimbo, and he’s happy about the character now appearing in cartoons. Where and when I don’t know, but I congratulated Stan on getting into the wider media world.

As I have time, I love looking at the lettering on old comics original art that’s on sale at the con. Here’s a great example of Gaspar Saladino’s talent with a dry brush on the word “cowards!” from OUR ARMY AT WAR #129. I’ve tried that. I never got it looking close to this good. 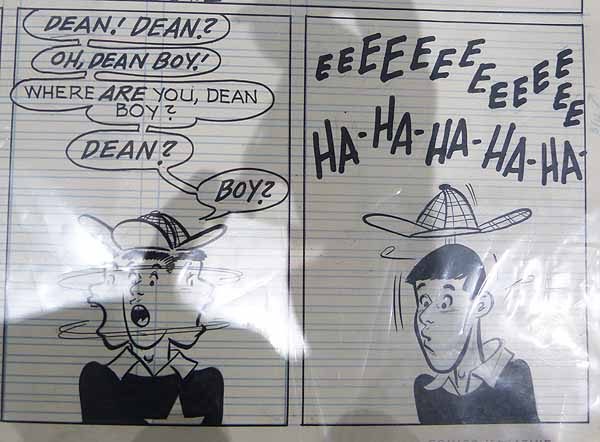 And here’s a rare example of Ira Schnapp story lettering from an issue of JERRY LEWIS, I didn’t take note of the issue number. Notice the light blue lettering guidelines that were printed on the art paper for a while by DC, I’ve seen a few other examples. That was a time saver for Ira, I’m sure. The art is probably by Bob Oksner. 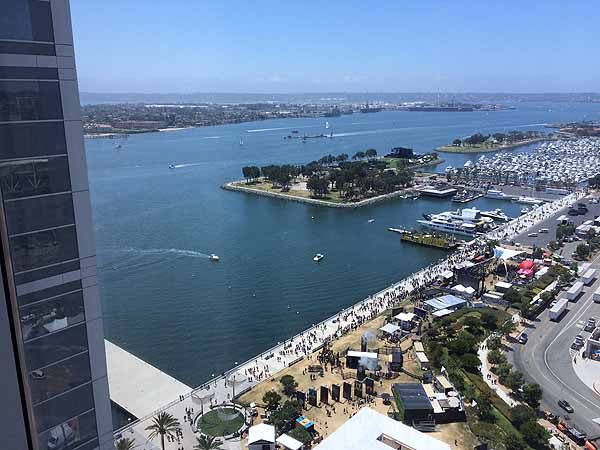 By 4:30 I left the con, which wraps up at 5PM today I think, and came back to my fabulous hotel room to finish up this report. Next I have to get my things packed as much as I can, and later I’ll have a traditional post-con dinner with friends. I fly home early tomorrow, sad to leave the fun behind, but ready to get back to my real life. Thanks for reading these reports, hope you’ve enjoyed them.