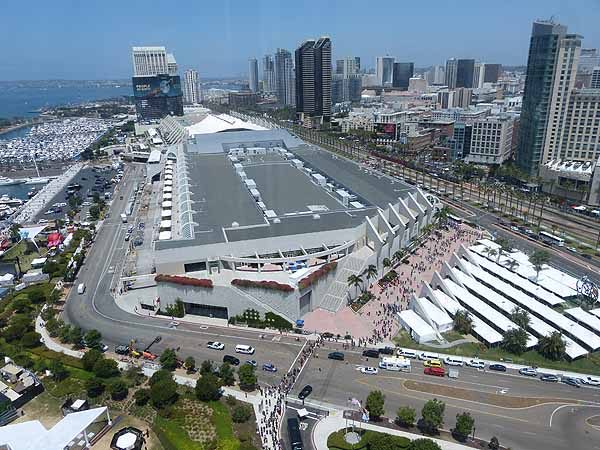 My day began at 3:45 AM, an hour earlier than usual, and I arrived at Philadelphia International Airport around 7 AM for a nonstop flight to San Diego leaving at 8:30. All went well, and I arrived in San Diego around 10:45 AM after adding three hours to my day because of the time change, which I would be feeling later in the day. Because I didn’t decide to go to the con this year until after the annual hotel room lottery, I had no hotel reservation, but was able to get one through the con as an Eisner Award nominee. They gave me a wonderful room at the Hilton Bayfront next to the newer end of the convention center, and here’s my room view looking down on it. This will be the most expensive room I’ve ever had, but it’s wonderful, and I plan to enjoy it as much as possible! The area in front of the con center is always jammed with traffic. To get me there, my cab from the airport went out to the interstate, drove east past downtown, then back down to the hotel. Much quicker he said, and I believe it. 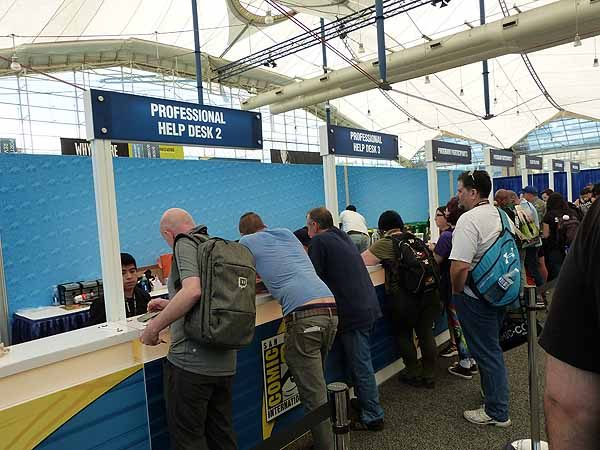 By around 12:30 PM I was in the convention center to get my badge. Unlike most years, I had missed pro registration, but as an Inkpot Award winner, I have a gold card, essentially a free pass to the con forever. I used it for the first time this year. It took asking at a few different booths to find the right person to give me the pass, and this booth had that person. Nervously, I handed over my gold card and soon had my pass! 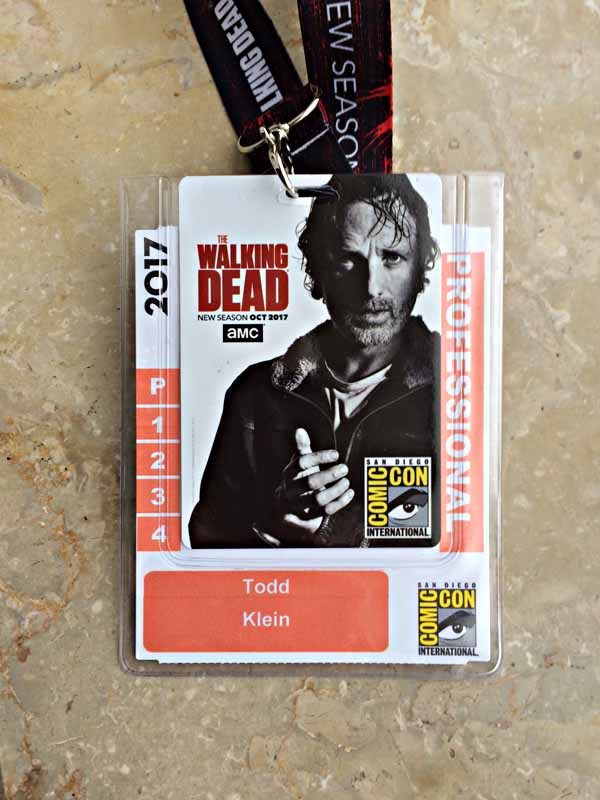 One new thing this year is the badge includes a plastic “credit card” with a chip that you have to tap on a card reader any time you go in or out of the con, I suppose to keep track of occupancy and who knows what else, but hey, at least I’m in! 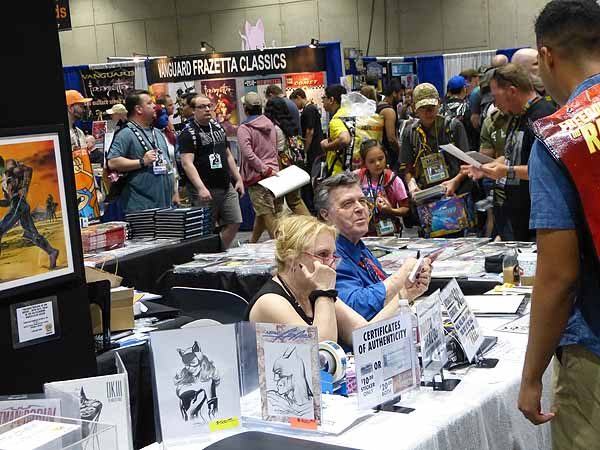 The layout of the Exhibitors Hall is about the same as the last few years, in other words, ginormous, about a half mile of stuff, with the comics companies in one area, the movie and TV companies in another, and areas for artists, old comics, original art, small press, etc. The first familiar face I saw was that of Neal Adams at his booth next to the DC one, busy as always talking to fans, signing things, and doing sketches. 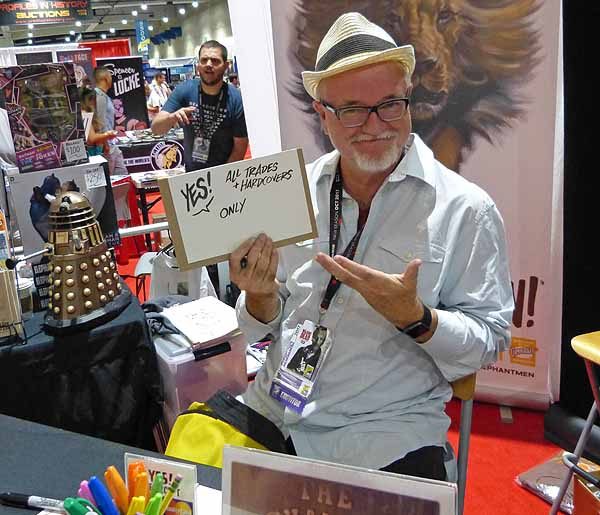 Also near the DC booth was Comicraft, where I had a nice chat with Richard Starkings. I caught him lettering a sign for his booth with a marker. “Yes, I can still use a pen!” he laughed. Richard is celebrating ten years of the comic he writes and publishes, ELEPHANTMEN, and told me the 25th anniversary of Comicraft is coming in November. “It’s when I hired JG Roshell,” he said. JG is not here, he’s at a typography convention in Europe! That’s cool. 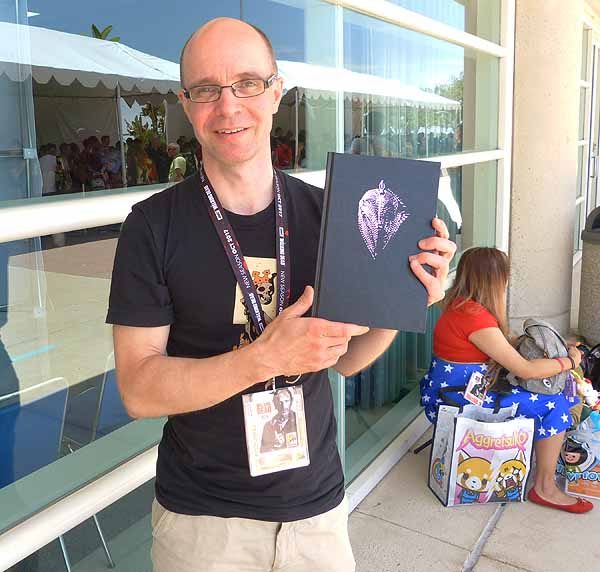 I had my regular meet-up with Danish superfan Henrik Andreasen to sign lots of things for his collection, and we had a good talk while I did that outside in the back of the con center. Henrik and I started coming to this show the same year, 1993, and have been friends since. In return for my signatures, he gave me a box of Danish chocolate, an unnecessary but welcome payment! 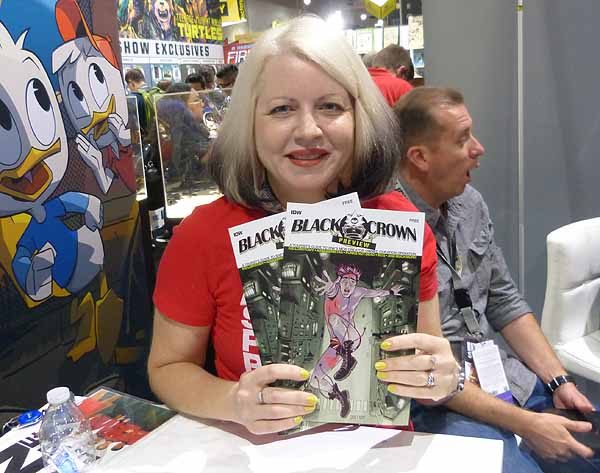 Back inside, I found Shelly Bond with a preview of BLACK CROWN, her new comics line from IDW. I hadn’t seen her since she left DC about two years ago, and it was good to catch up. Shelly seems very happy with her new role at IDW, and I certainly wish her well. Shelly said she’s delighted to be working with a smaller, and very supportive group who like her ideas and are backing them all the way. Her husband, Philip Bond, is doing the logos for the line, and I like them. Aditya Bidikar is lettering, and it looks great. Shelly had asked me a while back, but I wasn’t able to do it. She’s found a great new lettering partner. 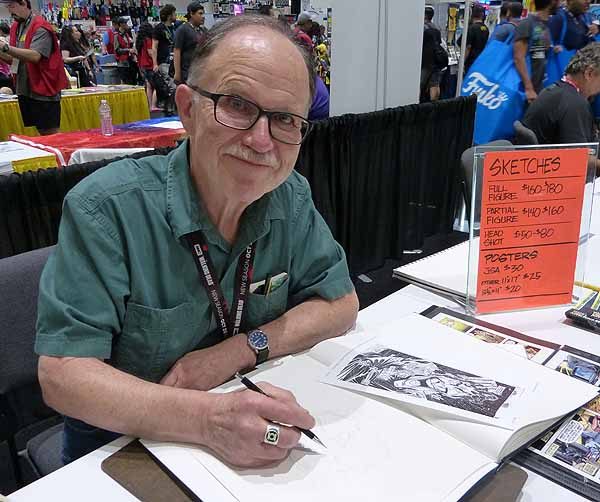 I didn’t spend much time this day in Artists’ Alley, but I did stop to talk to old friend and workmate Joe Staton, there with his wife Hilary as a guest of the con. Joe is in space #1, the very first space as you enter Hall G, or alternatively, the very last space if you enter from Hall A, so I’m sure lots of people will see Joe and enjoy his work and conversation. He was sketching The Joker as we talked, and we also sat together in the audience of a panel later. 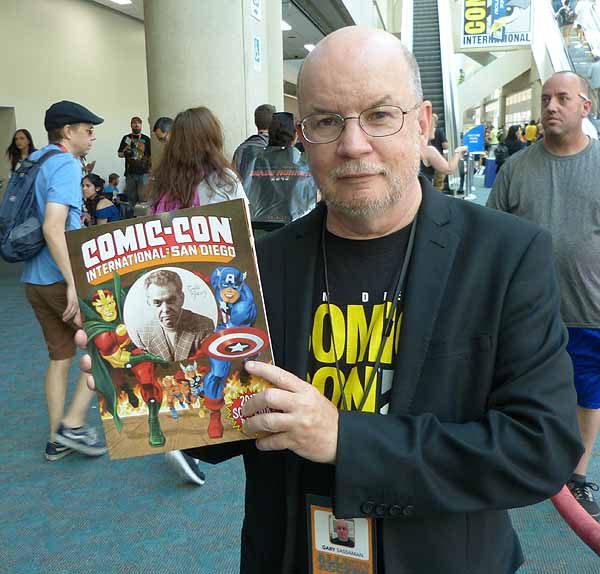 The other meet-up on my agenda was with Gary Sassaman, the editor/designer of this year’s con Souvenir Program Book. I worked with Gary on it, doing the logo and cover blurb, and some digital prep work on Bruce Timm’s great cover painting featuring Jack Kirby and his creations. Gary wanted me to sign the cover for him, which I was happy to do. We both enjoyed the project.

Mid afternoon I went to my first program, a memorial to and remembrance of artist Bernie Wrightson, who we lost recently. I met Bernie a few times, and worked with him on one DC series (THE WEIRD), but didn’t know him well, and I thought it would be interesting to see what some of his friends had to say about him. It was a great program, I learned a lot, laughed a lot, and wished I known the man better. Participants are here and the next few pictures, most well known to me. Here are Louise Simonson (who talked about posing for the iconic first Swamp Thing cover and story in HOUSE OF SECRETS #92), Walt Simonson, who had good stories about Bernie as a neighbor and workmate, and Scott Hampton, another friend.

Here are Hampton, Bill Wray (an early colorist for Bernie), and Frank Cho. 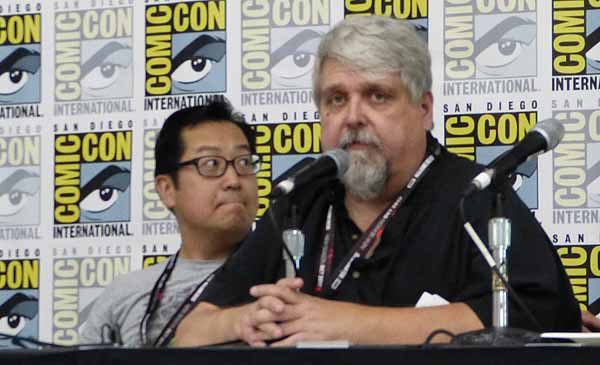 Moderator and panel organizer Scott Dunbier, who gave up panel time for his own IDW Artist Editions to do this instead. 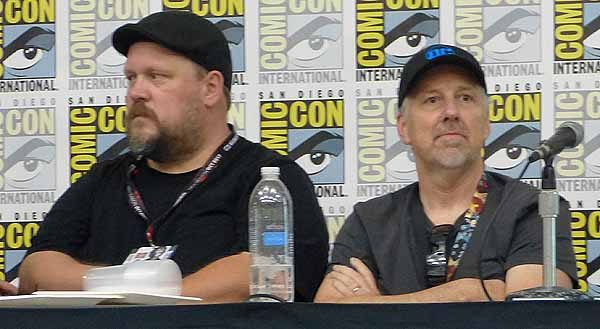 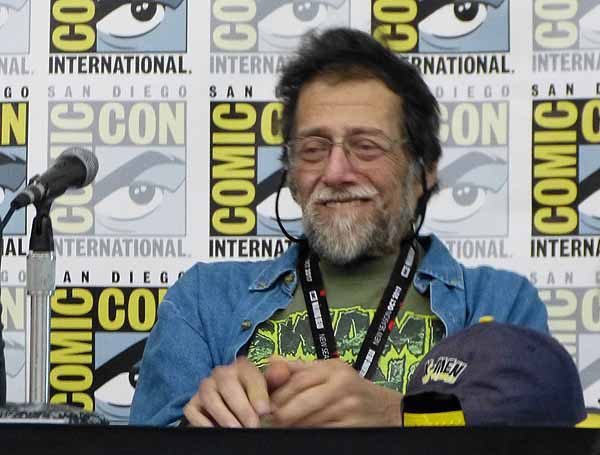 Perhaps best of all was Len Wein, Bernie’s partner on SWAMP THING and other projects. Len has had a lot of health problems himself recently, so it was great that he was able to join this panel and add his memories, and he seemed both very sad to lose his friend and grateful for their work together. 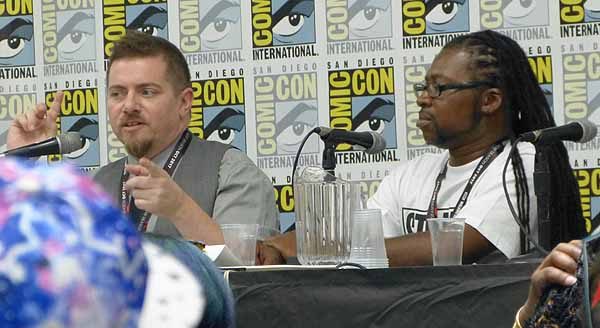 After that I caught the last half of a panel about letterers, inkers and colorists, where my friend Dave Lanphear was representing letterers, and doing a fine job. He’s on the left, inker Le Beau Underwood is on the right. Dave gave me a shout-out as I was leaving. Thanks, Dave! 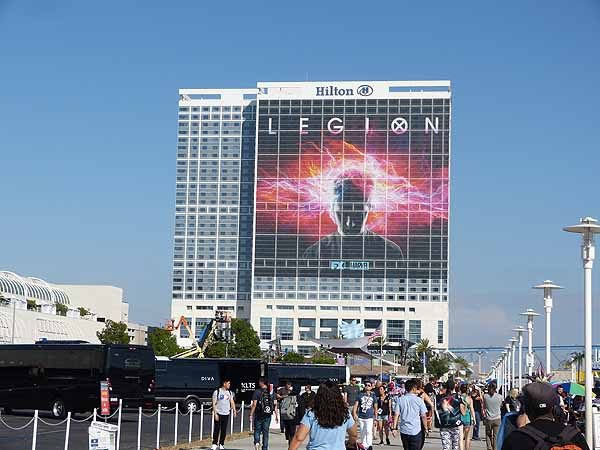 Mostly this year I plan to photograph the people I talk to, but I will include some general con shots like this one, looking at my hotel as I walked back to it. The last few years these giant ads have been on the hotels, and I’ve wondered what they look like from inside the rooms. I won’t find out, as my room is in the non-covered part on the left. The harbor promenade behind the con center is full of people, many waiting in “seems like forever” lines for the big Hollywood star events in Hall H, even camping and sleeping there. I don’t get this at all, but I suppose it’s just another sort of fan community. 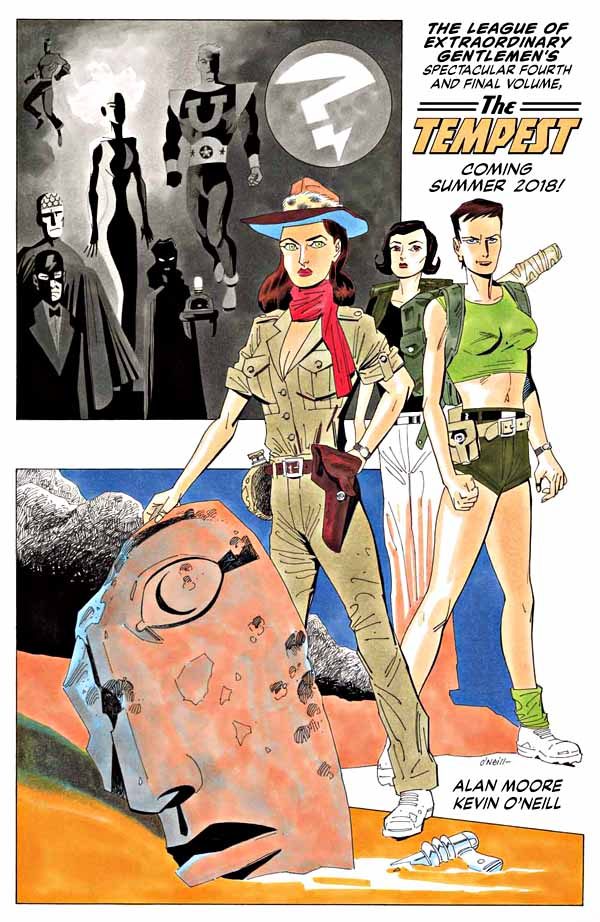 Back in my room I learned this news had broken at the con, a project I’m very pleased to be lettering, and according to Alan Moore’s press release, he and Kevin O’Neill’s last comics project ever. I’ve been working on the first issue for a few months, and loving it. I put together this promo ad a while back for publishers Chris Staros of Top Shelf (now part of IDW) and Knockabout’s Tony Bennett and Joshua Palmano (the British publishers). This news was even covered by the New York Times! It’s nice to be working on something newsworthy, but mostly great to be working with Alan and Kevin and colorist Ben Dimagmaliw one more time.

Later I went to dinner with DC editor Jamie S. Rich and friends, but I had to cut out early, as I was jet-lagged and exhausted. I’ll be on Jamie’s Young Animals panel Friday at 5:30 PM, as well as at the Eisners Friday evening. I’ll report on that soon.