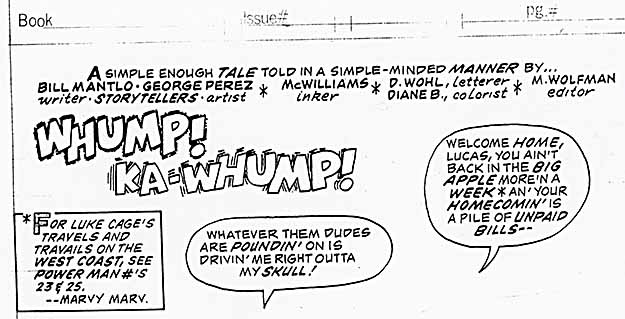 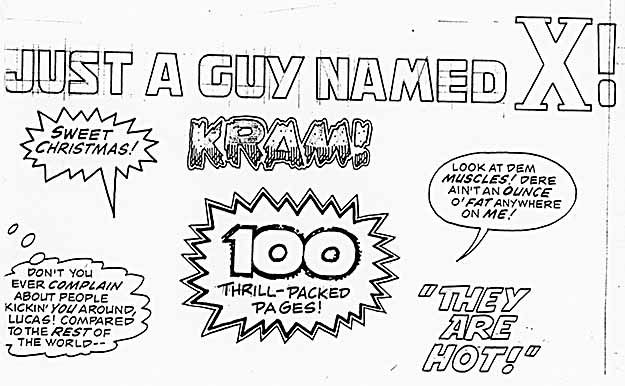 These and all images © Marvel.

We begin with two more practice pages by letterer Denise Vladimir Wohl making up pages 65 and 66 of the Danny Crespi files, a collection of cover and other lettering from the files of the Marvel letterer and staffer collected by his work-mate and friend Phil Felix. We saw some of Denise’s work in Part 16 of this series. She began working in the DC Comics Production Department in the early 1970s, and then moved over to Marvel by 1975. Much of the work on these practice pages is copied from POWER MAN #27 cover-dated Oct. 1975. Here’s the first page: 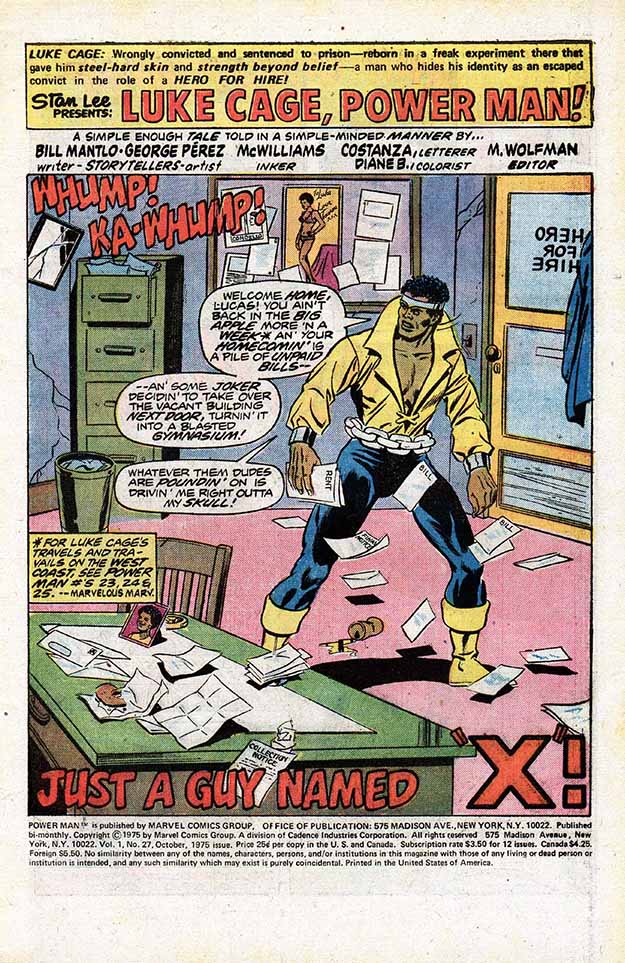 The printed book was lettered by John Costanza. Denise copied it, including the credit block at the top, inserting her own name in place of Costanza’s. Other Costanza work from other pages was also sampled. I don’t know the source of the burst “100 thrill-packed pages!” I think the reason these are in the Crespi Files is because she gave them to Danny, then Production Manager I think, to show him she was ready for paid lettering assignments, and she started getting them by 1976, if not sooner. Her lettering career at Marvel seems to run from about 1976 to 1981 according to the Grand Comics Database. The samples are pretty good, though not as good as the source material. I would have given her work if I were Danny. 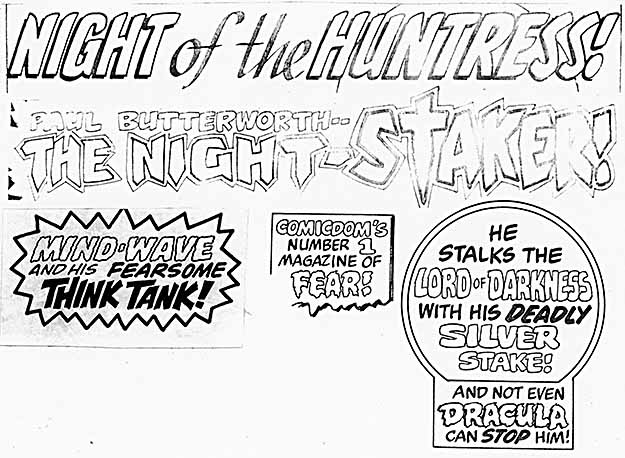 Page 67 of the Crespi Files is back to three cover lettering blurbs by Crespi and two story titles by John Costanza. Not sure why those are included, perhaps they were part of the material Denise Wohl was copying. Sources below. 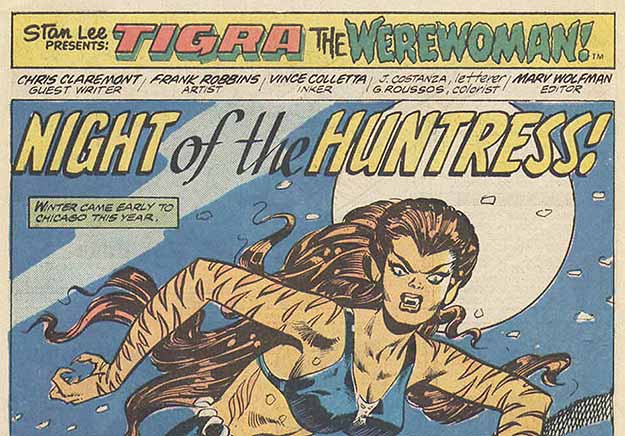 “Night of the Huntress” is the story title by Costanza from MARVEL CHILLERS #4 dated April 1976. The calligraphic style of “OF THE” shows right away it’s not by Danny Crespi, and the rest of the title has a cartoony bounce to it that characterizes so much of John Costanza’s work. The S’s are very different from anything other letterers of the time were doing, too.

“The Night-Staker” is the other Costanza story title from TOMB OF DRACULA #43 dated April 1976. Even though this is a horror comic, Costanza’s bouncy style is evident in PAUL BUTTERWORTH, and though the T in STAKER is pointed like a wooden stake, the word is not scary to me. It’s no surprise that John’s favorite kind of comics were humor and funny animals, and he drew some later in his career. 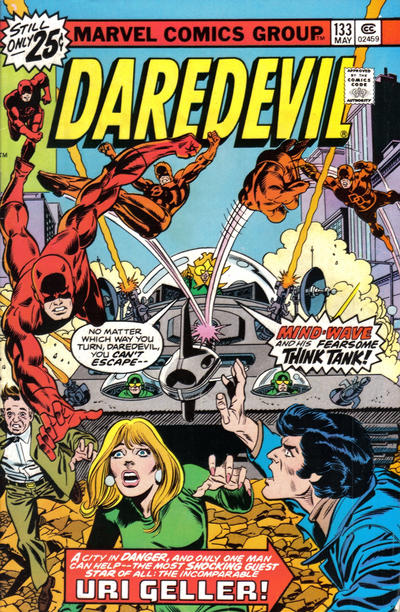 “Mind-Wave” by Crespi is from the cover of DAREDEVIL #133, May 1976. Among other things the very thick outline is a Crespi style clue. 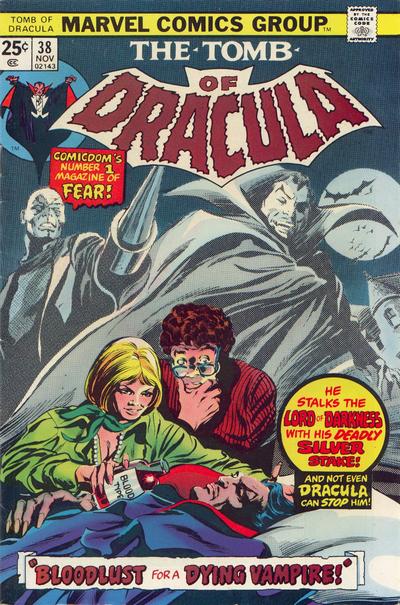 The last two blurbs are from TOMB OF DRACULA #38, Nov. 1975. You can tell from the unfinished outline on the first one that Danny lettered these over the cover art, and knew that corner would disappear behind the character’s head. I must add that some of Danny’s style is also soft and cartoony here, not unlike Costanza. 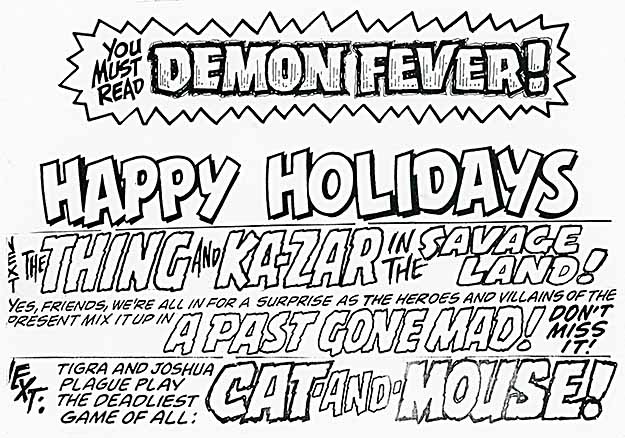 Page 68 of the Crespi Files looks like all Crespi’s work to me. I don’t have a source for HAPPY HOLIDAYS, it may have been used in a house ad or possibly a holiday card. The rest have been found with the help of Michael Styborski. The top blurb is from a cover, the lower three are next issue banners from the bottom of the final inside pages. Sources below. 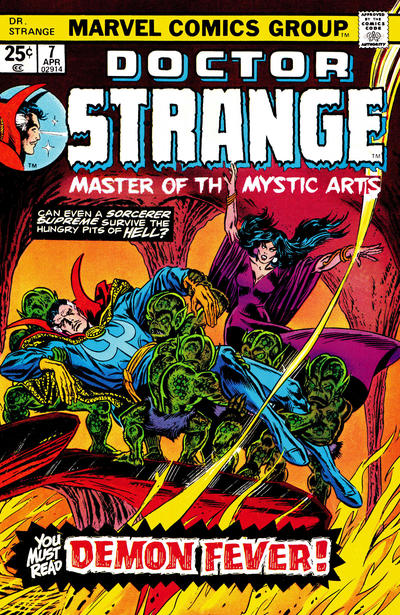 “Demon Fever is from DOCTOR STRANGE #7, April 1975. The blurb as lettered has been reversed using a negative photostat. The black lines are now white, and the title words are filled with solid red, a very effective look in my opinion. The black burst shape works fine here because there’s enough open area behind it to allow it to read as a separate shape. 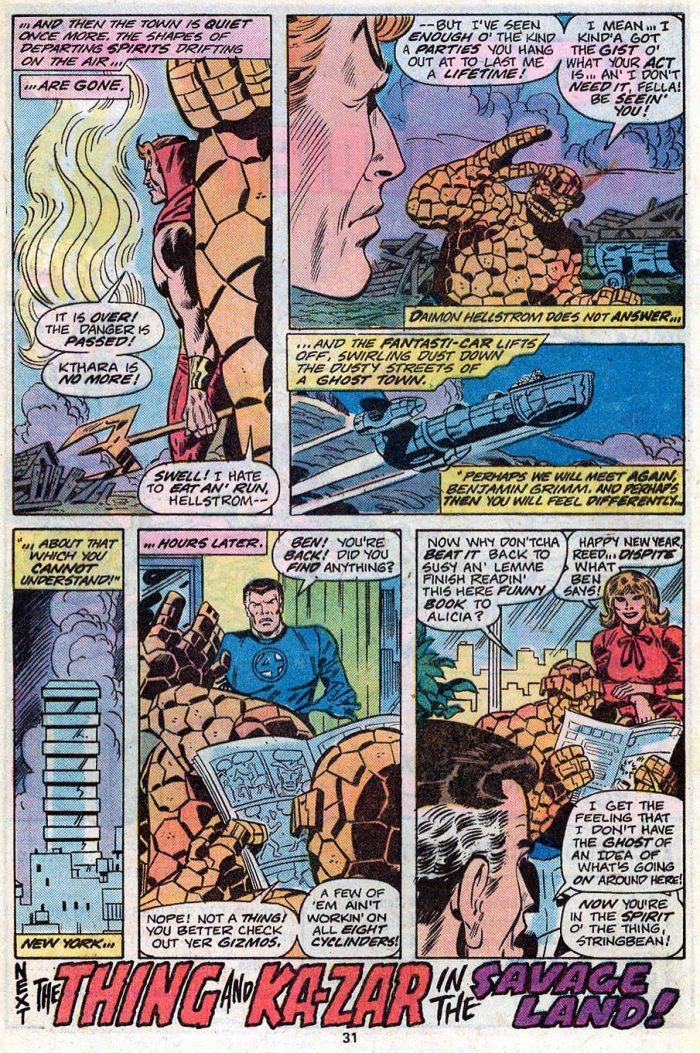 “Thing and Ka-Zar” is the end banner from MARVEL TWO-IN-ONE #14, March 1976. This was hard to find because the story it refers to actually appeared in issue #16. No doubt a missed deadline by someone required a different story to be run in issue #15. Kudos to Michael Styborski for tracking it down. The rest of the page is lettered by Karen Mantlo, the wife of the story’s writer, Bill Mantlo. Most of her lettering credits in the Grand Comics Database are from 1975-76. When she lettered the story (except for page 1 which was by Gaspar Saladino), the next issue blurb was probably not written yet, and Danny Crespi did it later when the book was in Production. It’s very effective, but the dark purple on SAVAGE LAND makes it a little hard to read. 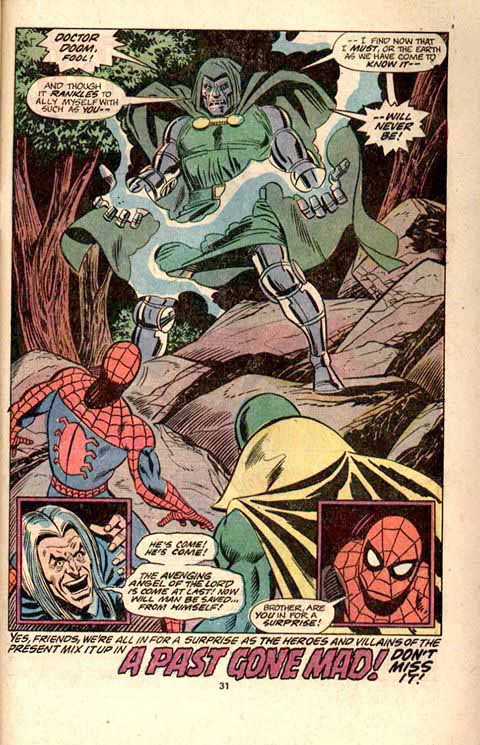 “A Past Gone Mad” is the end banner from MARVEL TEAM-UP #42, Feb. 1976. The rest of the page is again lettered by Karen Mantlo. 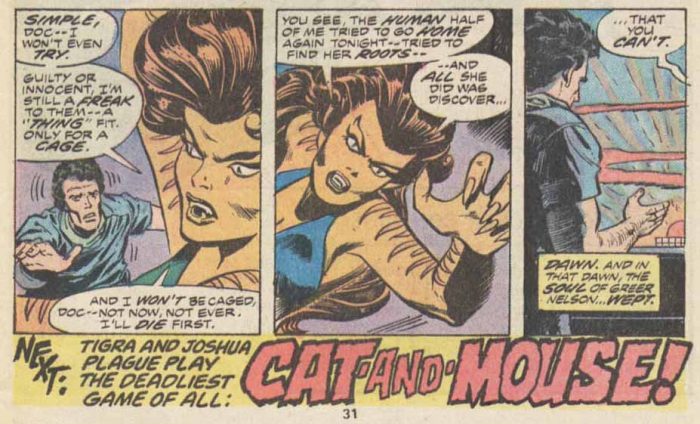 Finally, “Cat and Mouse” is the end banner from MARVEL CHILLERS #4, April 1976. The rest of the page is lettered by John Costanza, and it’s the story we saw his title from above. The end blurb could be by John, but the similarity to the other end banners on this page suggests to me it’s by Crespi. The rough outlines on the open lettering are another clue, I don’t recall Costanza doing that.