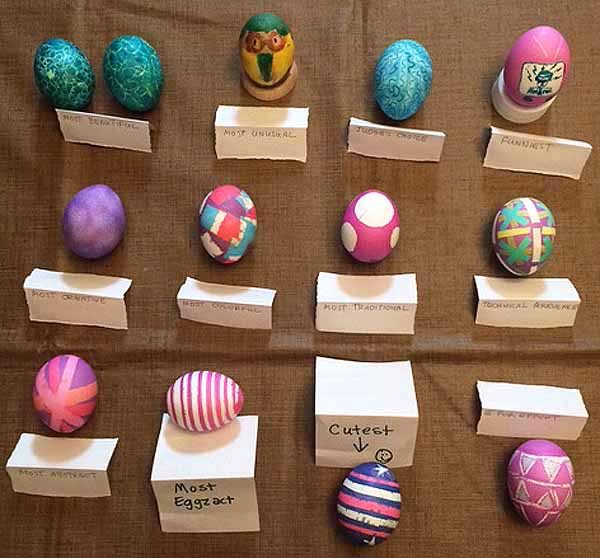 We were kind of mentally exhausted from the pysanky egg decorating on Saturday, but we wanted to do the traditional hard-boiled eggs too, so we’d have some to eat. Also, the egg decorating has become a tradition and a fun competition in our family group of Ann, Dave, Ellen, Tim, Ina and myself (Zack is away at college this year). We took a dinner break and then colored the hard-boiled eggs in the evening. I didn’t get any pictures of the process this time, but past years have plenty of that, I’ll add some links at the end of this article. Each of us dyed about a half dozen eggs, and then we judged them as a group this time rather than appointing one person to judge. It worked out fine, we arrived at a consensus. Fortunately Ann had saved the winner categories from past years, and we used those. Above is the entire winner group. 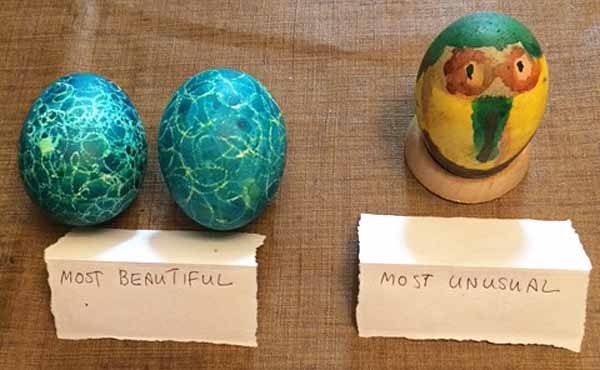 Ann and Ina made almost identical eggs that we deemed Most Beautiful, so they shared the award. The deep greens came from brushed on food coloring over traditional egg dye. This adds strong color, but it’s not attached well, so tends to come off on your fingers when you handle the eggs. Dave did the Most Unusual winner, which is meant to be a chicken, which he calls “the ugliest chicken you ever saw.” 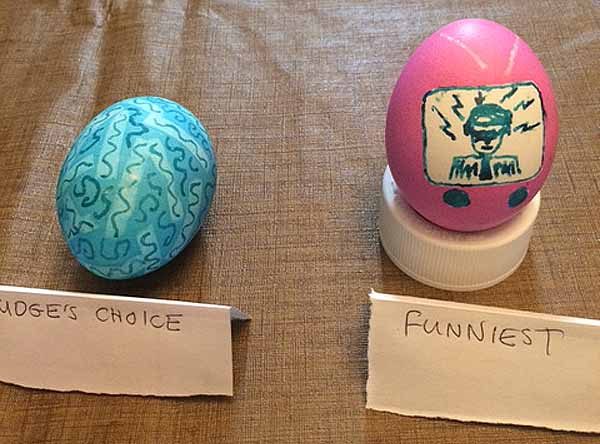 The Judge’s Choice award went to a blue egg of mine which includes strips made with masking tape and squiggles made with blue food coloring. Tim’s Funniest winner was meant to be someone on TV, he told us. There was a lot of talk about TV news while we were coloring. 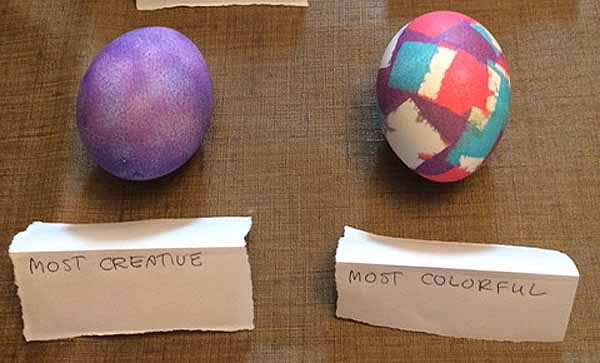 An egg of mine won Most Creative. I used new technique that I thought of on the spot, sandpaper to give a mottled look. Ellen won Most Colorful with her egg using masking tape to create the pattern. 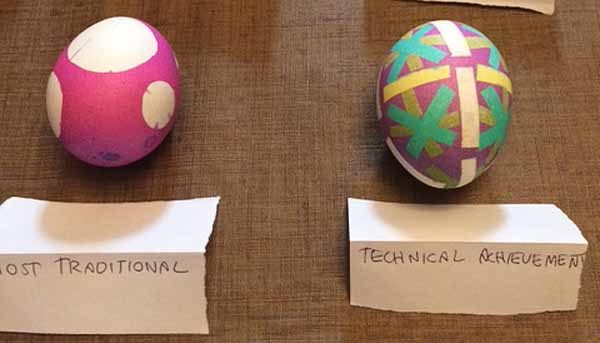 Tim’s giant polka-dot egg won Most Traditional, using circles cut from masking tape. My egg using strips of masking tape won the Technical Achievement award. We had a new kind of masking tape that Tim brought this year which worked much better than the Scotch tape we’d usually used in the past. Unfortunately I don’t have the brand name, but he called it “automotive masking tape.” 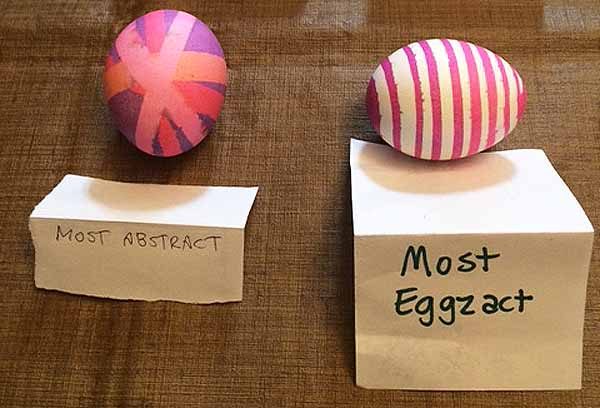 More masking tape decorating from Ellen for Most Abstract and Tim for Most Eggzact. 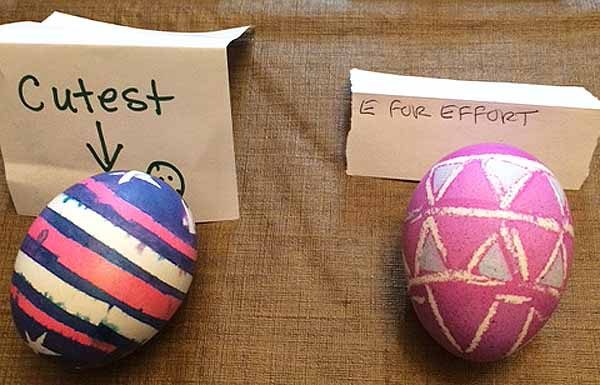 Finally we have Ann’s stars and stripes egg for Cutest and Tim’s egg won E for Effort, decorated with wax crayon and tape. 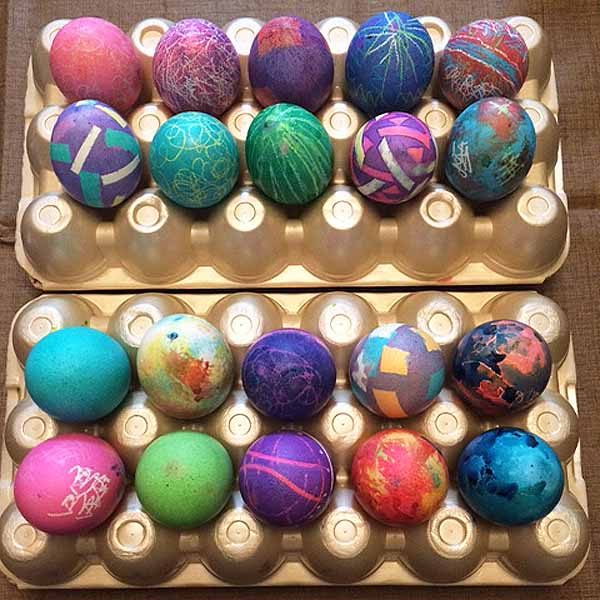 As often happens, the non-winners are just as interesting and colorful as the winners, and winner choices are subjective, so here are the rest of the eggs we colored. I can’t identify them by creator, though. 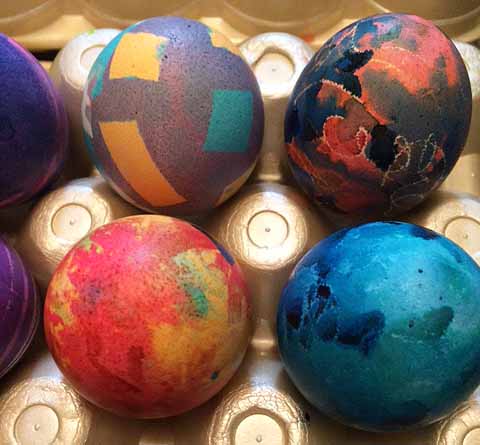 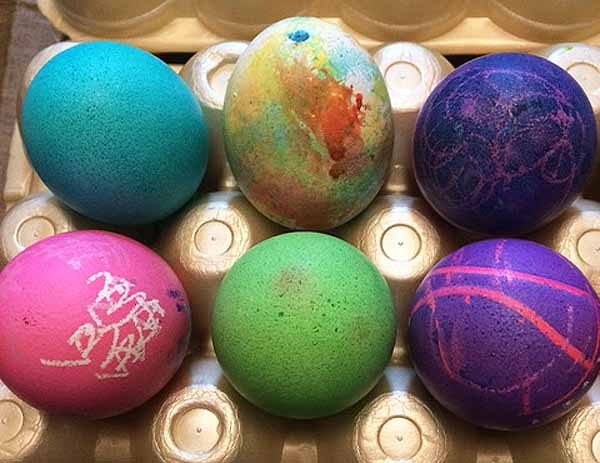 More non-winners. Some of these are as dark as the psanky eggs, though of course without the black color option. 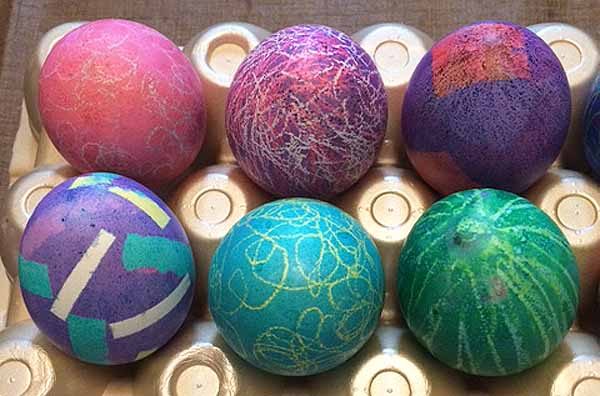 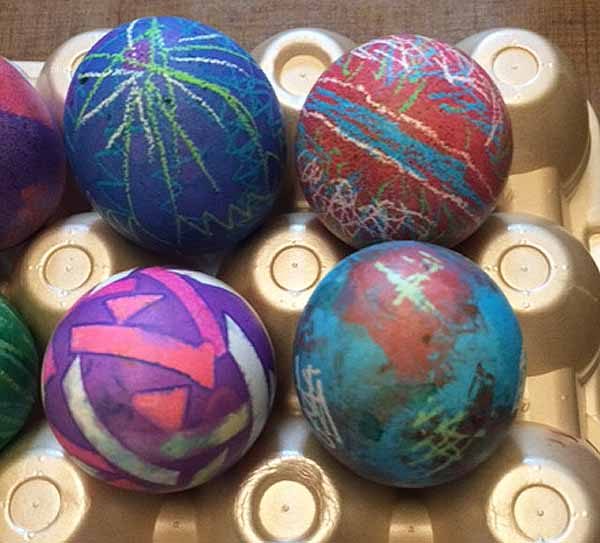 Final group of non-winners, but they’re all winners really. Fun to do, and fun to eat! Here are some links to previous years that include more process and how-to information.

Finally, to get everything on one page, here’s what I wrote about this year’s pysanky egg decorating: