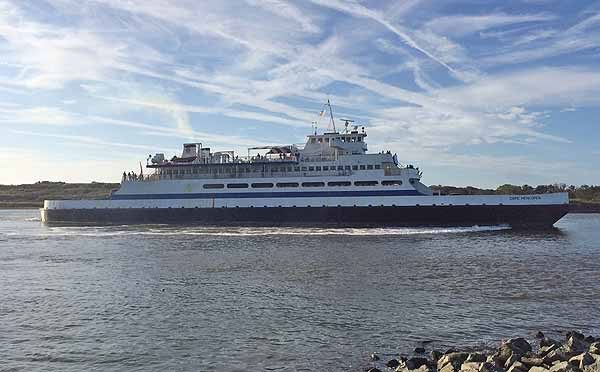 This past Saturday we began a three-day visit to Chincoteague, Virginia by taking the Cape May – Lewes Ferry, above, to Lewes Delaware, always a fun trip unless the waves are high, which was not the case that day. From there we drove down through the Delmarva Peninsula to the barrier island of Chincoteague. 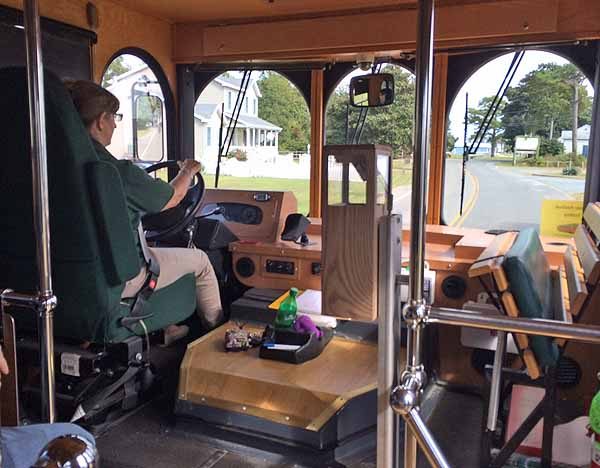 We were visiting my cousin Jody, her husband Allen and their daughter Kate, who have lived there for the past ten years. This is the first time we’ve been to see them, though we did go to Chincoteague once before in 1994. One of Jody’s part-time jobs is driving a tourist trolley that takes visitors around town, and Allen joined Ellen and I for a ride on Jody’s trolley. 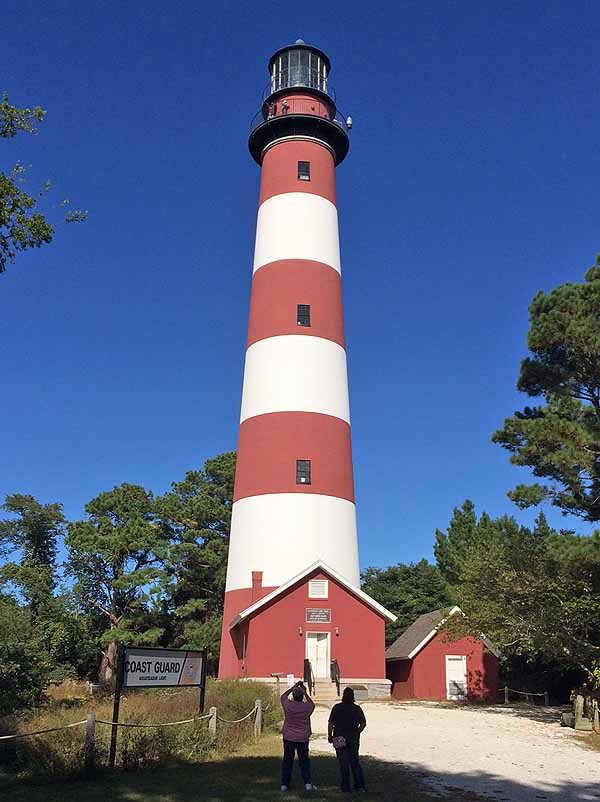 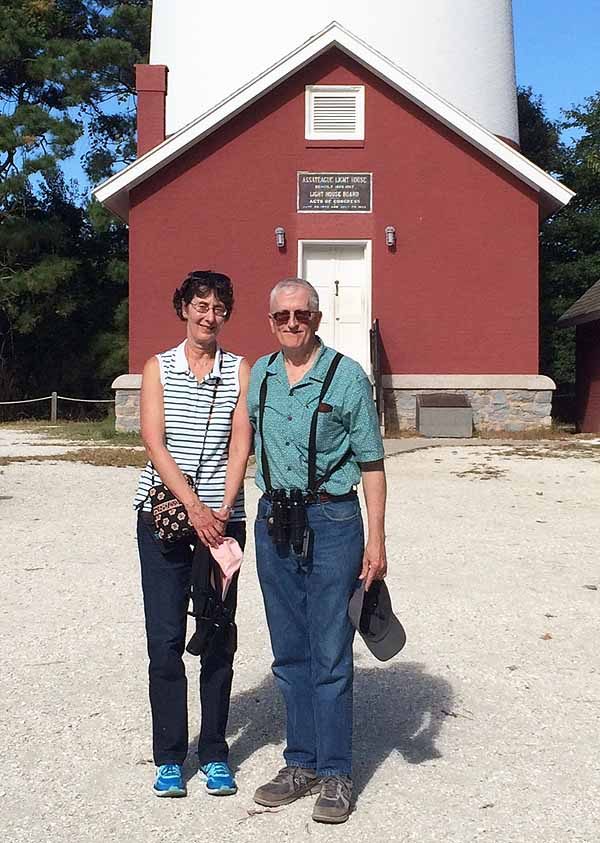 Here we are in front of it, but we got there too late to go inside. We’d revisit it Monday. Also on Assateague we visited the beach, drove around the Wildlife Loop where there were surprisingly few birds that day, and saw some of the famous wild ponies in the distance. There are two herds of wild ponies on Assateague, one at the north end in Maryland, and one at the south end in Virginia. They are recognized now as a distinct breed of horse, (not really pony) with a diminutive size due to their diet of less-nutritious salt grass probably, similar to the way deer in the Florida Keys have become smaller than normal. More on them later. 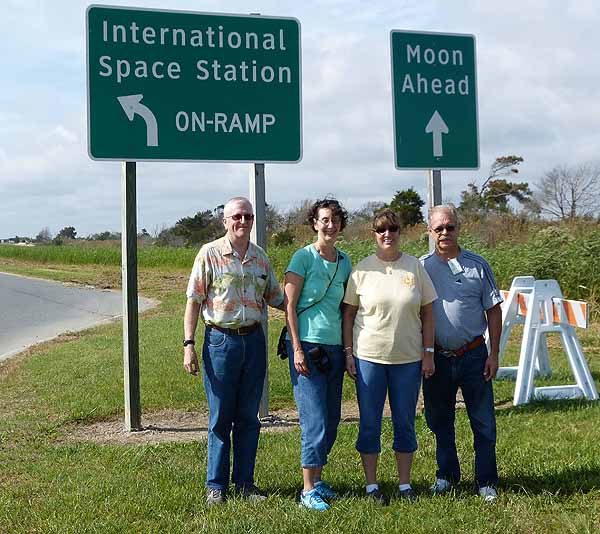 Just south of Chincoteague Island is Wallops Island, home of NASA’s Wallops Flight Facility, currently the site of supply rocket launches to the International Space Station, as well as other government work. Ellen and I had been to the visitor center there in 1994, but Allen works on the site driving staffers and space-camp students in an out, so he was able to take us right into the facility. Here are the four of us in front of some pretty amusing road signs leading to the main launch pad. I’ve put together two photos to get us all in, that’s Jody and Allen on the right. 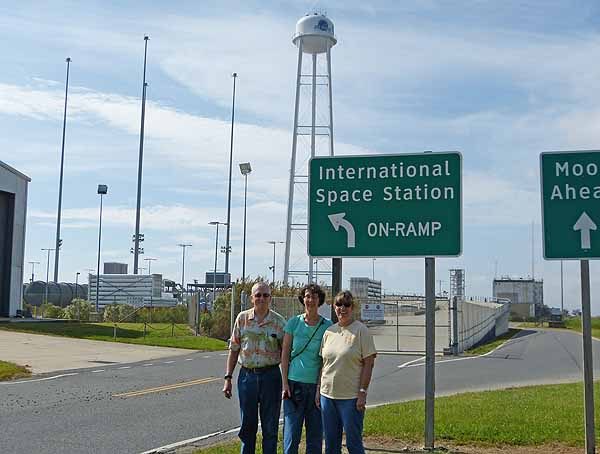 Another angle showing what we could see of the actual launch site from this spot, as far as we were allowed to go. 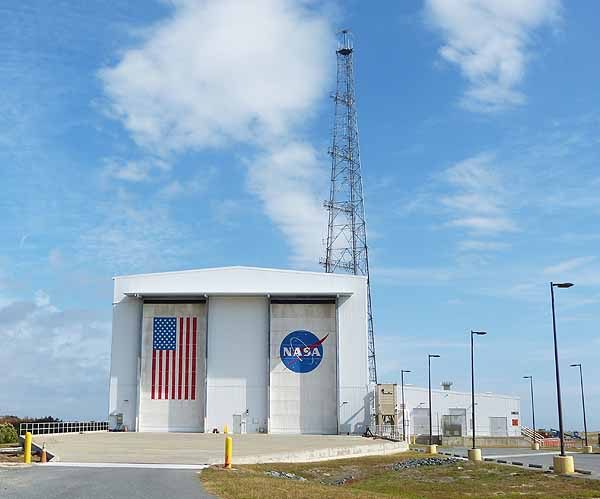 This is, I think, a rocket assembly building, much smaller than the one at Cape Canaveral, but the same idea. 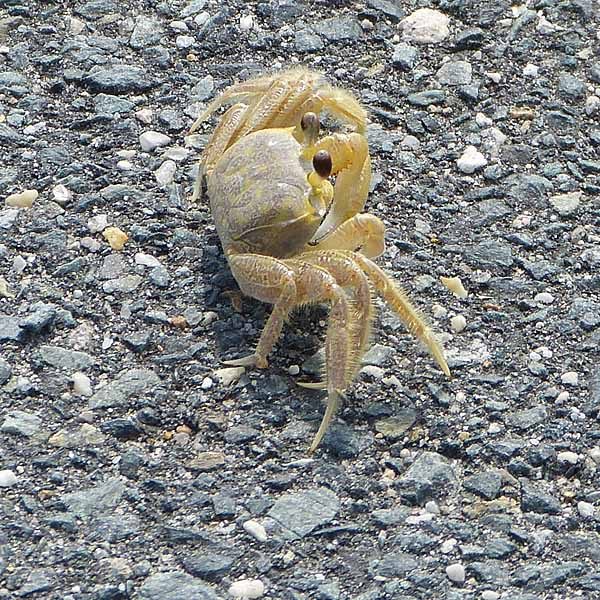 There were no signs of life except a few birds and some Ghost Crabs like this one scuttling around on the road for some reason. They blend in perfectly with beach sand, hence their name, but are quite obvious here. 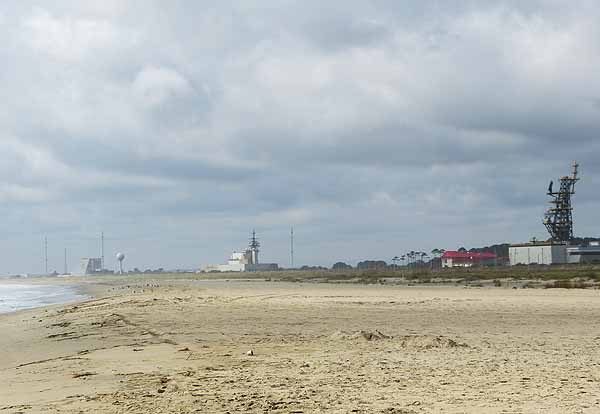 We had the entire beach to ourselves when we got to it, this looks south toward the buildings and launch pads. Employees are allowed to use this beach on weekends, and I’m sure there are more people on it in the summer. 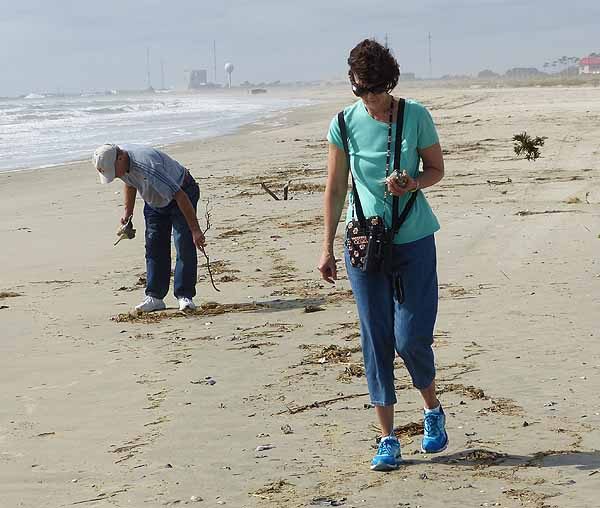 There were some nice whelk and other shells on the beach, and Ellen collected some to bring home. This is about as close as you can get to an undeveloped but still accessible beach on the east coast, I think. 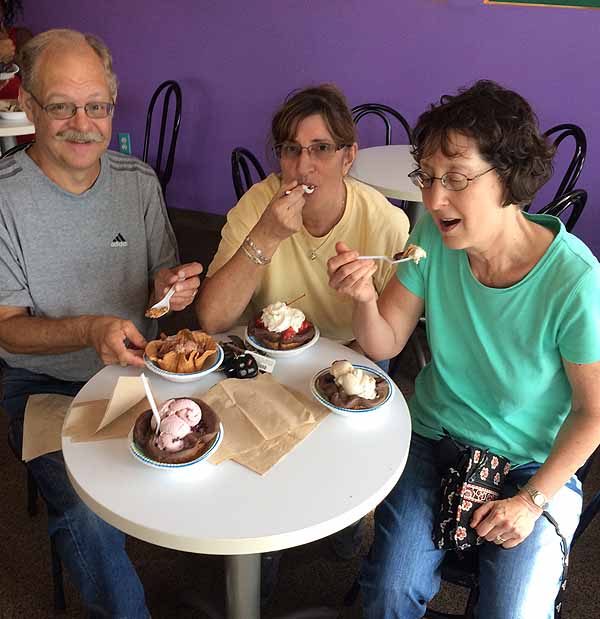 When we got back to Chincoteague, it was lunch time, and we had lunch at Island Creamery, the best home-made ice cream in town. Delicious! We had ours served in fresh-baked waffle bowls. 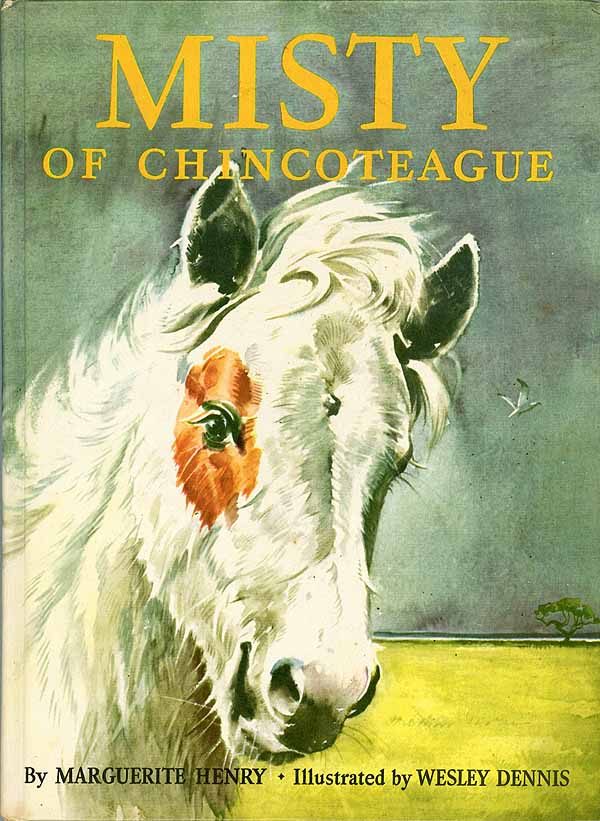 The most famous resident in Chincoteague’s history is a horse: Misty, whose story was told in this 1947 book by Marguerite Henry and Wesley Dennis. Henry wrote several more books about Misty and her progeny, and Misty’s story was also told in a popular 1961 film starring David Ladd, Arthur O’Connell and Anne Seymour. I remember seeing it as a child, and Ellen and I have both read and enjoyed all of Marguerite Henry’s books. The Assateague ponies and their story have long been a draw to tourists. 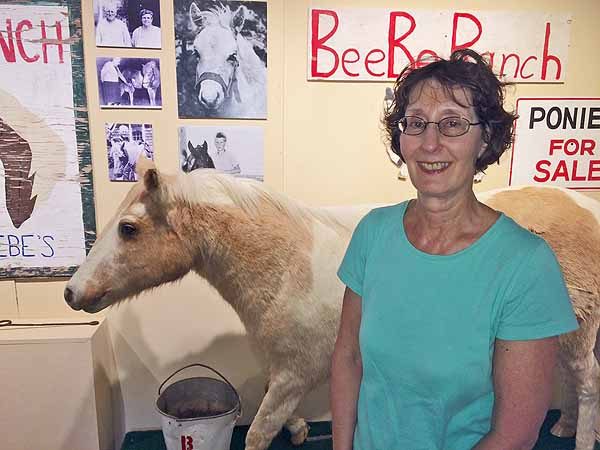 Here’s Ellen with the real Misty, stuffed, at the Chincoteague Museum, which has an exhibit about the real horses and their owners, and many other exhibits about the history of and life of the island and its inhabitants. Oyster farming has long been a major source of income, and chicken farming was too, until the chicken farms were wiped out in a 1962 storm that flooded the island. Now tourism has taken the place of that. 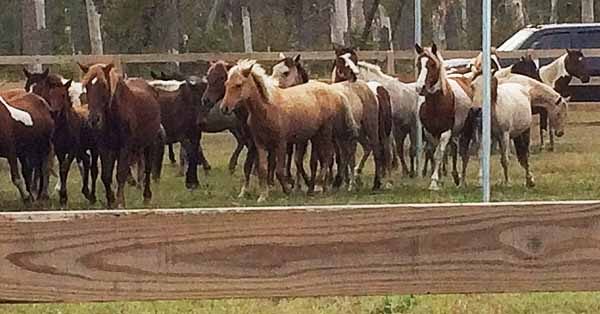 After the museum we went on to Assateague, and were surprised to find no ponies in sight anywhere. The reason became clear when we got to this new corral. The southern herd is owned by the Chincoteague Volunteer Fire Company, and has been since the 1920s. They lease grazing rights on Assateague, and watch over the herd. Several times a year the wild horses are rounded up for doctor visits, and in July they are swum across the channel to Chincoteague so that the year’s new babies can be auctioned off to raise money for the Fire Company. The herd is restricted to 150 animals by the park service, so this is a way to keep that number while raising needed funds. Not all the young ones are sold, some are “buy-backs” which return to the herd to replace horses lost to old age or accident. 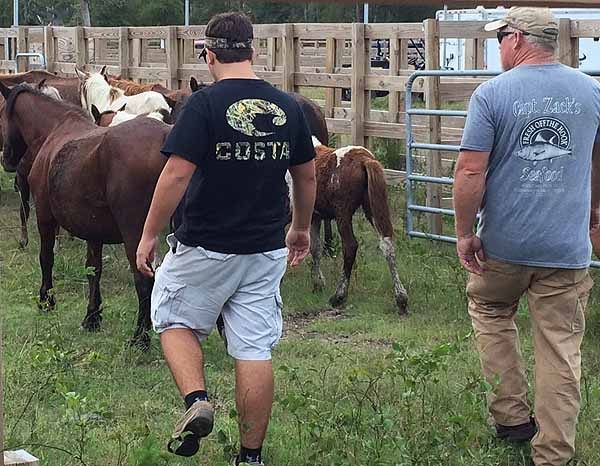 As we found out, the Salt Water Cowboys from the Fire Company were rounding the herd up to separate young ones that had been sold in July, but were too young to leave their mothers. This was fascinating to watch, and got us much closer to the animals than we ever expected. 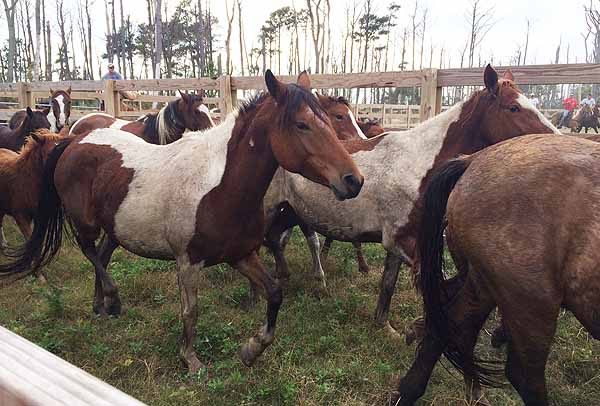 Some pictures of the herd running past us down a chute in the corral. The cowboys were gradually separating the young ones, which wasn’t easy, as the mothers were not in favor of this idea! It took multiple rounds through the chute to get the babies into their own separate corral where they could be loaded on a trailer and taken to Chincoteague. 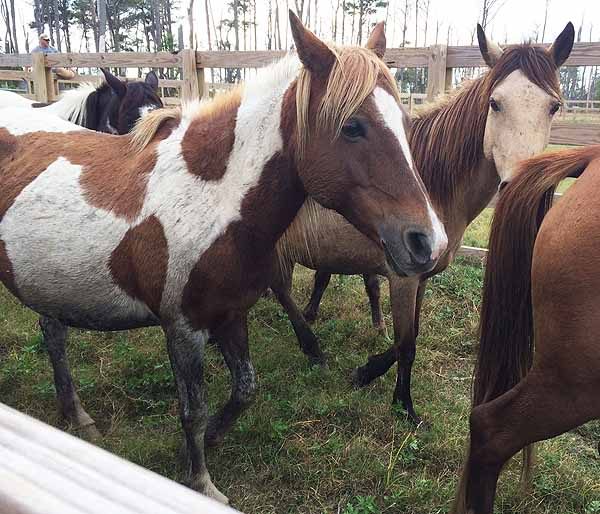 The origin of these horses is not known for sure. One of the two most popular theories is that they began from horses in a Spanish shipwreck that set them free here. The other theory is that early settlers in the area grazed their horses and cattle on Assateague to avoid taxes. Today’s herd may be a combination of the two. 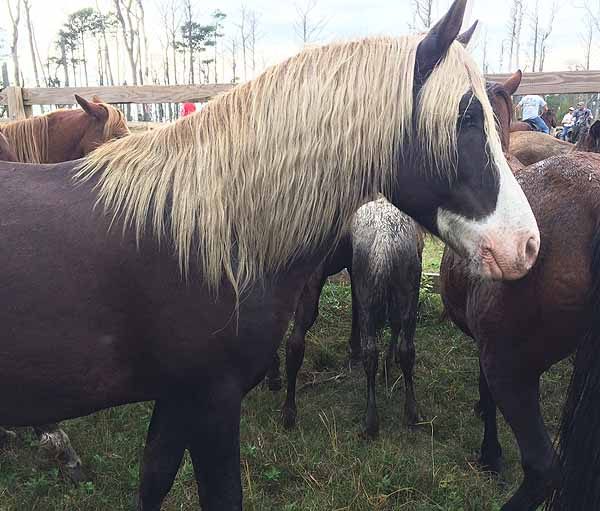 One of the handsome stallions. The horses were muddy from their round-up in the marshes, but looked healthy and had plenty of spirit. There are several stallions, each with a harem of mares. We really enjoyed this close look at them. 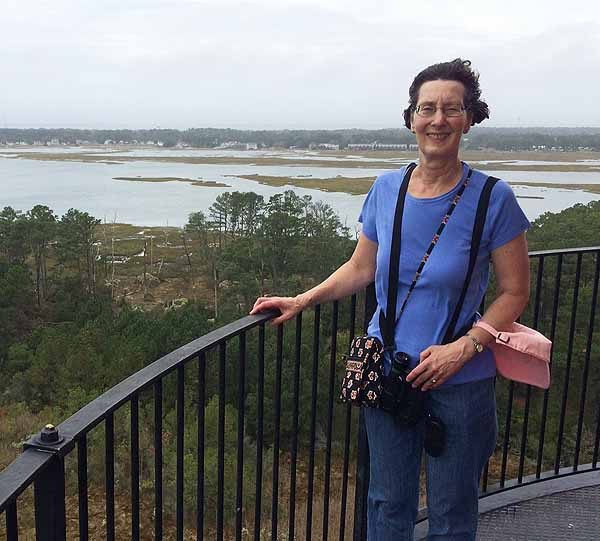 On Monday morning Jody had to go to work at the local school, where she teaches part time, so Ellen and I went back to the Assateague Lighthouse and climbed it. The views were great. 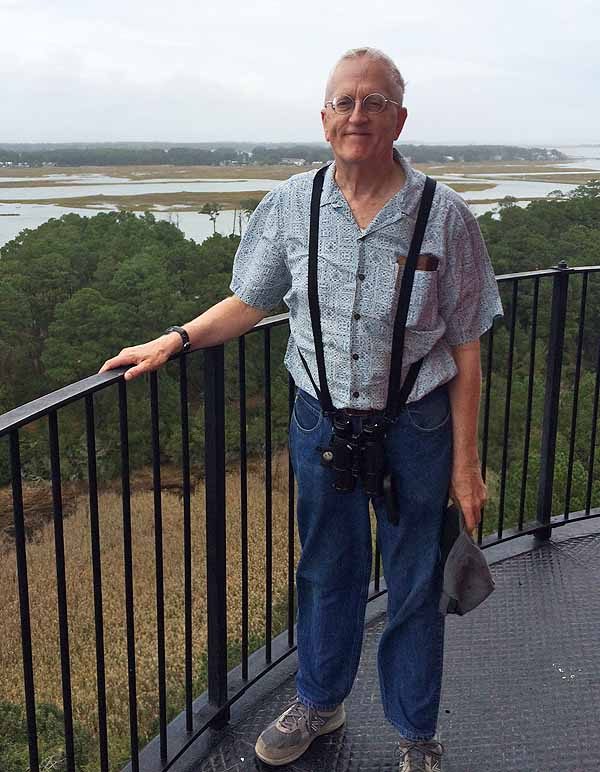 We were able to see many of the places we’d been over the weekend from a new perspective. 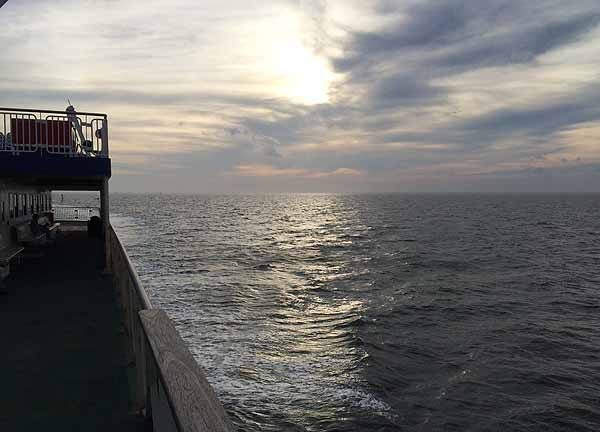 Monday afternoon we returned home, taking the ferry back to New Jersey. Despite the storms to the west, there were only a few sprinkles of rain for us over the entire weekend, and we had a great time. Thanks to Jody and Allen for being such fine hosts!

One thought on “Visiting Chincoteague, VA”