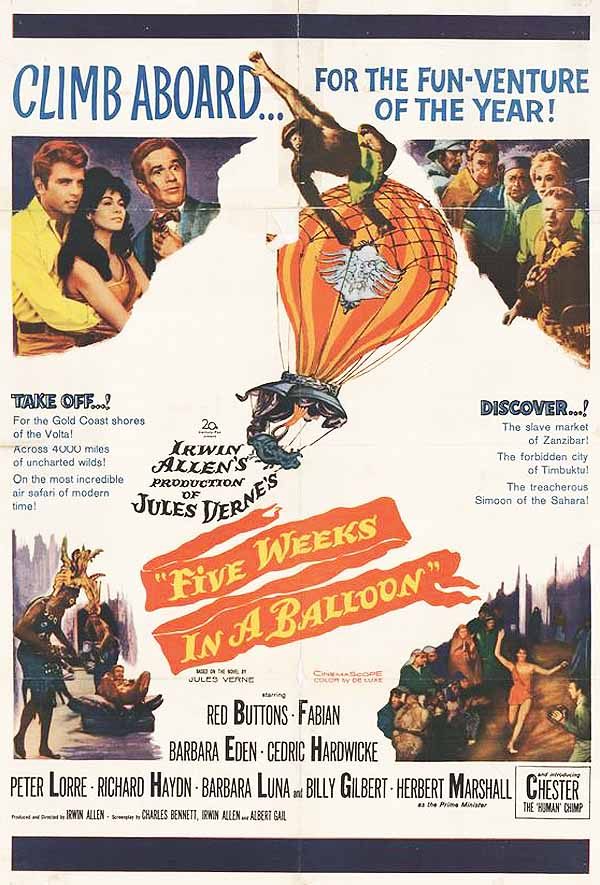 After enjoying the Jules Verne novel (just reviewed here), I was curious about the Irwin Allen Technicolor film. I’ve rarely liked anything Allen did, so I wasn’t expecting much, but even my low expectations were not met. I found the film on YouTube, not a great copy, but good enough to learn that I could only watch about a quarter of it. The film draws very little from the book, just the basic idea of a balloon voyage across central unexplored Africa, the name of the balloon inventor, Fergusson, and a few greatly distorted events from the book. Visually, the effects are cheap and ineffective from the first frame, as we see the balloon on a demonstration flight for the Royal Geographical Society (not in the book). The gondola of the balloon is laughable, one end looks like the head and neck of a giant unicorn for no good reason. Cedric Hardwicke plays Fergusson ineffectively, he’s dull and uninteresting. His assistant Jacques (replacing black manservant Joe in the book) runs the balloon machinery, thereby giving Hardwicke little to do other than act stuffy and officious. Jacques is played by teen idol Fabian in an obvious ploy to attract a young audience. He’s fine, but completely out of place in this story.

Before the balloon launches, the mission is changed by Britain’s Prime Minister from exploration to a silly military/patriotic one where Fergusson must secretly plant the British flag on the west coast of Africa to thwart some slavers there. In charge of this, and going along is Sir Henry Vining (not in the book) played by Richard Haydn. Haydn’s comic performance was the one thing I did like about the film. A British character actor, he’s best known today as the voice of the Caterpillar in Disney’s “Alice in Wonderland,” he’s always fun to watch and listen to. Other cast members of note like Barbara Eden, Peter Lorre and Billy Gilbert were wasted on nonsense and looked uncomfortable. Red Buttons was awful as the reporter sent along to cover the flight for an American newspaper. In the book, there were only three passengers on the balloon…two for a while when Joe jumps overboard into a lake to help keep the balloon aloft. In the film we end up with about eight people on the balloon, none of them interesting except Haydn. I will admit I skipped through a lot of scenes looking for something enjoyable, so I might have missed a few worthwhile moments, but I doubt it. Even the final thrill ride from the book is made silly and dull here.

Verne’s book is not great literature, but it’s a lot more fun than this awful film!